There's a festive tinge to this post: red. Though not the red of this...

...nice though they are, and very Christmassy.

It is a red that seasoned readers of the blog may remember, and others might enjoy for the first time. 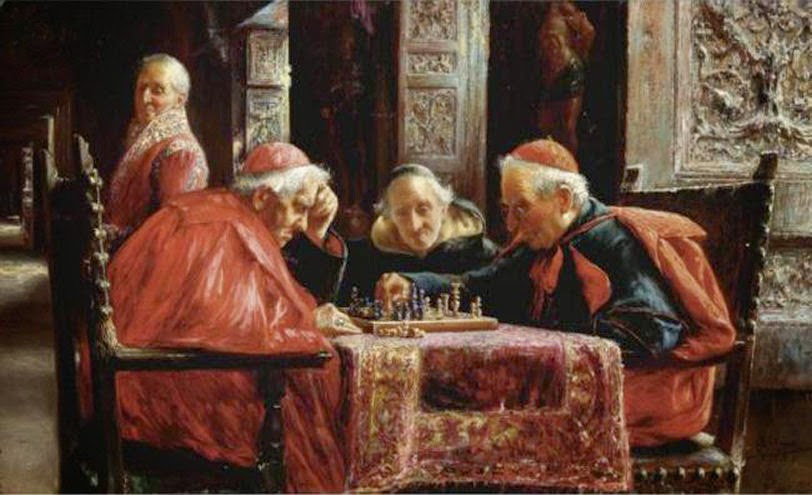 ...the red of a Cardinal's robe - perhaps that's Cardinal Red.

It is rendered above by José Gallegos y Arnosa, as it appeared in the blog's first Chess in Art post in the sequence published by Justin about five years ago. Although Spanish by origin, Gallegos y Arnosa practiced in Italy (see here), which may account for the style. But, the old-master manner is a bit deceptive as his dates were 1857-1917. So it's likely it was painted in the latter part of the 19th century, or even just into the 20th - but as noted by Justin, the exact year is unclear (and the same goes for the other works below).

One can relish the characterisation, the animation, and the detail in such a work; and one can ponder (should the fancy take you) on the significance the contorted figure (Saint Sebastian?) visible in the background, standing in stark contrast to the well-upholstered clerics seated around the board. Other Cardinal pictures also draw you in, so let's have a close look at a few more - it turns out there are rather a lot of them. We'll start our sample with a simple case, and a single figure.

This gives the lie as to what most of these cardy pics are all about. They are subtly subversive, gently sending up this holy order for their impious enjoyment of a lavish lifestyle and not-so-guilty pleasures (some might say their cardinal sins - sloth among them). Whatever Cardinals are supposed to do, they are never shown doing it, and so we get a kind of satirical Chess-in-Art.

For a game, and two figures, the solitary Cardinal needs an opponent. But - heaven forfend! - here he is in secular company.

Landini again. Isn't that the same chap modeling the Cardinal - surrounded, as he is, by the same pictorial elements (screen, background painting, extravagant ornaments, etc), with that tell-tale cushion under-foot? It is in a rich green, the complement of the sumptuous red, and in a velvet cover - to emphasise the pampered indulgence. The Cardinal's dejection betrays his perilous position in the game. This time the cat is nowhere to be seen. Probably he kicked it, as you do when you're losing.

Playing with a lay brother may be defensible, even if the position on the board is not defendable; but if you play indiscreetly à deux with a lady, better give the servant the day off.

Granted that there's no game of chess, just lubricious tea; but a set could do the job just as well. See, for example, this by the same artist.

That's three figures, but any number of extras could be added (drawn by repetition, would that be?) - here's Mannucci, yet again, from a recent auction sale:

Dodgy quality here in the reproduction - sorry - yet still the Cardinal tries to steal the show, though obviously the lady is stealing the game (note a minor motif throughout: when playing a lay person, a Cardinal is invariably depicted worse, chess-wise). She challenges also on the fashion front: the rose-tinted gown is a decorous feminine riposte to the flamboyant garb of the Monsignor.

There are examples aplenty, the one below employing (in an all-clerical contest) the usual pictorial devices in surroundings verging on the decadent. There may be subtleties on the board, but the decor is decidedly de trop.

Apparently (it says here), all this artistic Cardinal teasing was an expression of anti-clerical sentiment, particularly in the second half of the 19th century. The prolific Mannucci, though, was active in the 1920s and 30s; thus the gag ran and ran.

Now here's a thought, prompted by J.M.W.Turner, and an additional reason for their enrapture with red: it may have been just naked attention-seeking, if you know what I mean, by the artists themselves. In the absorbing film (recently released) directed by Mike Leigh you will see the cantankerous Mr Turner (played by Timothy Spall) at the Royal Academy upstaging the hapless John Constable with a last minute dab of vermillion.

Initially he dropped in an incoherent splodge, leaving his admirers perplexed...

...to which he later returned to deftly transform it into something altogether more meaningful... 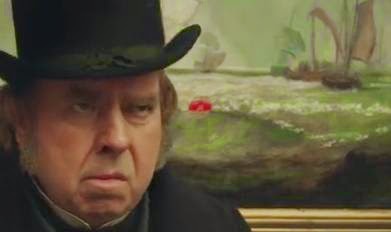 ...to the astonishment of the critics; and the chagrin of Constable hung alongside (if you know what I mean).

This may go a little way in explaining why an ambitious artist might resort to Cardinal Red. But why chess should be prayed in aid is a bit of mystery: much as we chess players might like to fantasize, the game, as we play it, seldom affords opportunities for indiscretion or excess.

A second thought is that in the early decades of the 20th century, when Mannucci was active, the new inorganic pigment Cadmium Red (a powerful colour, and also good for pinks) became available: and that may have encouraged further anti-clerical escapades.

At the risk of Cardinal overkill here is another exquisite Gallegos y Arnosa: he gives us the most densely populated pictures, and so a grand finale.

Here he shows a kind of holy chess café, and more orange than vermillion (even allowing for unreliable colour reproduction).

But if this is subversive, then it is at a level almost subliminal. Opulence, yes; dereliction, quite possibly; but yet no bling, flirtation, or playing to the gallery. All is surveyed under the affectionate regard of the artist, with an even-handedness that spreads the tasteful detail across the scene and grants no superiority to either side in the game. But, as we noted above, Gallegos y Arnosa practiced in Italy, with therefore rather a lot of Cardinals looking over his shoulder. Too much provocation and they might have seen red, and summoned the Vatican Guard. Anti-clerical France, with its passion for laïcité was, it seems, the active site of Cardinal bashing.

Now that we have given them a good going-over, we can observe that in the magisterial sweep of Yves Marek's wonderful book Art échecs et mat, with all its astute thematic analysis and copious illustrations, there is not a single Cardinal chess picture. He might, perhaps, have included one or two in the chapter on chess as divertissement - though given their relative chasteness, and whatever the coquetry on display, to have filed them under érotisme would obviously have been a clerical error.

Have we identified a new Chess-in-Art theme? It would be distinguished by the singular criterion of Cardinals at play - i.e. engaged in extra-curricula activity apparently at odds with their teaching - kitted out in robes of a distinctive hue. After due consideration, I think we can take it as read.

Seasonal best wishes to all.

Thanks to Richard Tillett for the tip.