Well aware of this game

It was Xmas 1990 and a bumper chess column at the Spectator. Those were the days. Back then Ray even used to say so when he was quoting from Kasparov.

Well he tried to, anyway. (Where's the closing quotation mark?) You have to expect some slackness in magazine offices in the run-up to Xmas and with Ray's column running over two pages, there was a lot of space to fill. 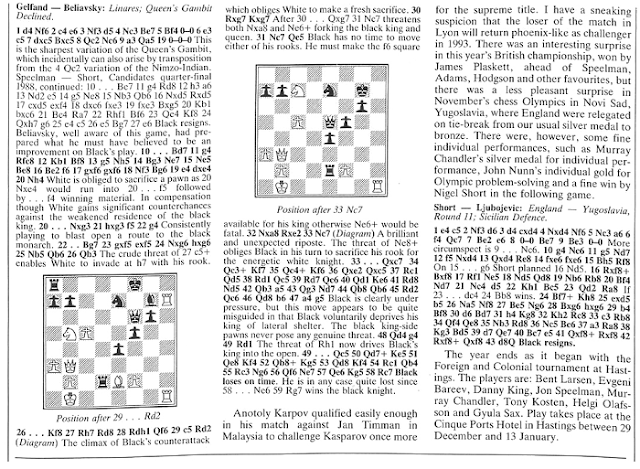 Three games to enjoy - and while the notes for two of them were less than extensive, even the king of getting-away-with-it couldn't get away with doing all three in such truncated style. So what to do? Where, during the Xmas season, could such a busy man find the time to annotate a game properly?

Aha! Ray had it. Why find the time, when one can just find the notes instead?

Why not just use the notes from a game which had caught his eye earlier in the year? Specifically, in the issue for 10 March 1990. 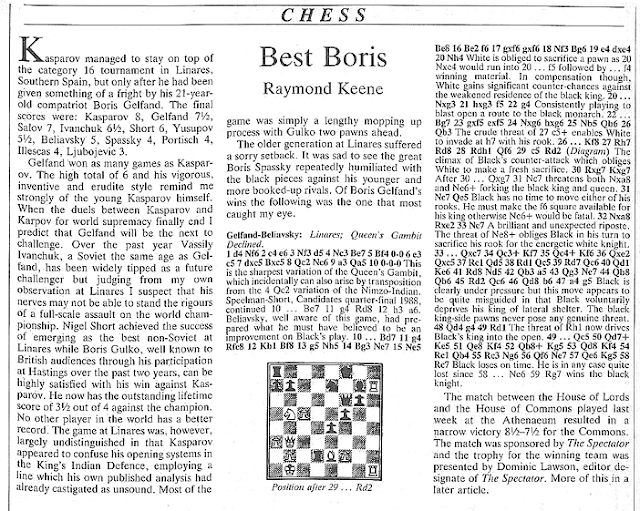 So that's what he did.

March notes at the top, Xmas notes at the bottom. Note slight alterations, whether for reasons of increased space or anything else that Ray may have felt important - these considerations not including him actually providing any original work for the readers' cash, or putting in any effort for his own. 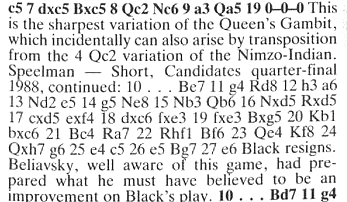 And there you have it. It wasn't the first time Ray had done this - far from it - but it may have been the first time he did so, in 1990, reusing notes from the Spectator in the same magazine in the same year as they first appeared. It's a convoluted construction, but when you've done as much cheating as Ray has, there are a lot of subsets of cheating involved.

1990 was, of course, the year that Dominic Lawson become Spectator editor, having previously been deputy to Charles Moore. The announcement was made in Moore's diary in the issue for 17 February 1990 and Lawson took over in April.

So Lawson was editor when Ray lifted his March column practically wholesale for reuse at Xmas. Was Lawson aware of this? Who knows, but we know that when he was deputy, he was as interested in chess as he is now

and moreover that he paid close attention to the chess column, since in the issue for 3 February 1990 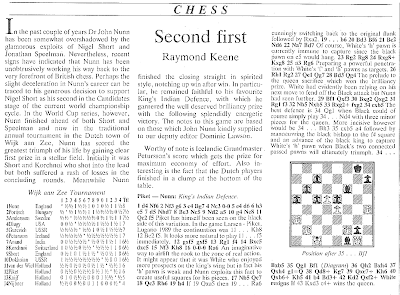 he was the conduit through which John Nunn's notes arrived at Ray.

OK. That was twenty-four years ago and just considered on its own (rather than, say, as part of a whole decades-long career of cheating) it would be a minor, long-forgotten sin and this piece just a bit of fun on the part of one pre-Xmas column at the expense of another.

Still, it can't really be considered on its own: it wasn't the first time Ray had played at ripping off the public while in the company of Dominic Lawson, though it may have been the first time the two were combined in the Spectator.

Of course it's possible that Lawson didn't know anything about any of this (or about, say, Ray plagiarising notes from CHESS in the Spectator the following year) though he would have been remarkably negligent to fail to see any of Ray's deviations from ethical journalistic practice, especially since Ray's reputation was already low in 1990, went lower in 1991 when Keene's Gambit appeared and was lower still after he plagiarised John Donaldson in 1993.

Can none of this, none of any of Ray's other misdeeds, have been known to Dominic Lawson? We can't say how much Lawson knew. We can say though that whatever was known to him, none of it ever stopped them working together. 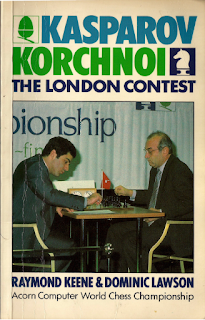 This book is full of old notes recycled on the sly 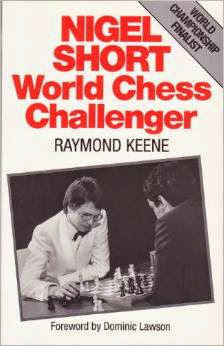 I've not seen this one, any information would be gratefully appreciated

Indeed, none of it seems to have mattered a damn between two old pals in a position to do one another favours.

It was all a very long time ago. Except that now, in 2014, Lawson is President of the English Chess Federation - and his old friend is still, disgracefully, at the Spectator and the Times. Let us hope that during 2015, Lawson does not do any more favours for his old, corrupt and disreputable friend.

And a very merry Xmas to you all.