Not the Wimbledon Variation

I’m as much in the dark as the chesser on the next board as to how openings get to be called what they do: “Spanish”, “Alekhine”, “Modern”, “Orang-Utan” and the like. It is not about the derivation, mind you, which is usually pretty obvious. My question is: who decides?

Not always the inventor of the opening or variation it seems. For better or worse Eugene Colman wanted to call his discovery in the Two Knights Defence the “Wimbledon Variation” (as he wrote in a letter to the British Chess Magazine in 1952).

Hot stuff: Colman's 8...Rb8
Tomorrow is the anniversary of Colman's birth on the 11th October 1878. It is an opportunity to mark, quite rightly, his dedication to chess, his distinguished career in the Colonial Service, and his exemplary conduct in Japanese internment camps during WW2. But his generous and self-effacing suggestion that 8..Rb8 be christened “the Wimbledon Variation” is a bit puzzling. The assertion that this bustling London suburb at the end of the District Line, with its frantic rush-hour station, was the "birthplace" (as he said in the letter) of the variation is stretching it a bit; because he cooked it up when he was in Singapore. So, perhaps Colman was ingeniously hinting that his swashbuckling defence was, like Wimbledon, the end of the line - but, for White, whose play was now destined to hit the buffers. 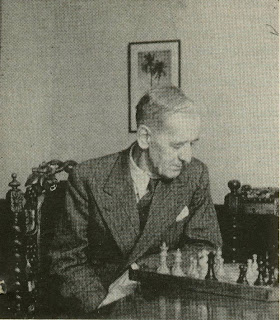 E.E.Colman at home in Wimbledon in 1953
Although he may have hoped to see his uncompromising gambit indexed in the opening manuals between the Wilkes-Barre and the Winawer, it has come to be known eponymously as the Colman variation. Btw, and as another mark of the man's qualities, it is said that he wanted his fellow internee*, and 8..Rb8 analyst, Dr.Yeoh Bok Choon's name conjoined to it - alas, in vain; although this post allows us to commemorate Dr. Yeoh's contribution, too.

Thus Colman found himself, against his better judgement, as the sole author of the variation and in the good company of other British amateurs whose singular names appear in the openings vocabulary (as spoken in these islands, anyway) e.g. Dilworth, Gledhill, Reynolds, Rice*, etc. Rather it were so, some will say, than we had the Manchester, the Harrogate, or the wherever-they-hailed-from, Variations.

Eugene Ernest* Colman himself was by origin a South West Londoner, coming back to Wimbledon after the second world war, and passing away in Roehampton in 1964. This local interest makes him especially fascinating to your Streatham blogger, and one could contemplate a Colman theme tour of his various addresses among the Victorian villas of Wimbledon, hopping on the train for a couple of stops (as Colman would have done) to take in Tooting Bec Golf Club where he was a member (the course has long been concreted over for housing, but is remembered today in “Links Road S.W.17”), returning finally via Haydons Road station to pay respects at Gap Road Cemetery, his last resting place, where he lies, by curious coincidence, not far from H. E. Bird who was also interred there in 1908 . 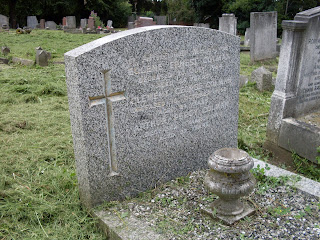 Olimpiu Urcan’s widely reviewed, well-received, and absorbing book Surviving Changi. E. E. Colman: A Chess Biography tells the whole story, including of Colman’s time at Cambridge, and his years of enlightened public service in Malaya and Singapore, where at the age of 64 and surely looking forward to retirement, he was interned for three years by the invading Japanese in conditions of great privation, and worse, with the inevitable toll on his health. He organised chess among the fellow internees, and with them analysed this "new defence", unleashing it on hapless opponents in the London and Surrey leagues in the post-war years. This is the "first official recorded game with 8..Rb8" says Olimpiu. Colman's opponent didn't get as far as the buffers - he'd barely left the platform.


There’s no doubting his chess strength, developed though a long association with the game, and I was tickled to notice the happenstance that back in 1903 Colman played on board 42 alongside would-be Ripper and Broadmoor patient Reginald Saunderson (remember him), on board 122, in the Northern v Southern Counties correspondence match (though given Reginald's situation, “alongside” may be another stretch too far).

Given in the B.C.M. 1903 p 344
Olimpiu Urcan’s book comprehensively sets out Eugene Colman’s known chess games (many of them annotated) and activities, including the evolution of his variation. We also learn about his post-war contribution to Surrey and Wimbledon chess, where he conscientiously served his county and his club on and off the board.

There may be more about Colman to be recovered and told, and Olimpiu is working on a revised second edition, with corrections and additional material. He would welcome missing games and personal information; and any reminiscences of the man (though that must now be from a diminishing number) to supplement that of the indefatigable Trevor Brugger, the current Secretary of Wimbledon Chess Club, who knew Colman when he, Trevor, joined as a junior. If you can help please contact Olimpiu on urcanolimpiu@gmail.com

Something that cries out to be found is the 2 missing scores from Colman’s 3 game mini-match against Frank Marshall in April 1911 - a hundred years ago. Here, to finish off this post, and in Colman’s honour, is the one surviving game, and fittingly it is the one in which E.E.C. fought off and beat his illustrious opponent.

*denotes: see Comments
Acknowledgments.
Full details of Olimpiu Urcan's book are Surviving Changi. E. E. Colman: A Chess Biography 2007, published by the Singapore Heritage Society. ISBN 978-981-05-7922-7.
Thanks to Olimpiu for his help with this post, in which all the major historical facts, and both the game scores, are indebted to his book. The minor Saunderson (to whom we shall shortly return) and Bird connections, and any errors, are down to me.
The portrait photograph was kindly provided by Olimpiu, and comes originally from Bruce Hayden's appreciation of Colman in Chess Review May 1953.
Posted by Martin Smith at 8:00 am

English amateurs giving their names to chess openings: Rice, if you mean Isaac Leopold Rice of Rice Gambit fame, was a German born American. You might, I suppose, mean the problemist and sometime teacher at Tiffin School John Rice, but I don't think he gave his name to any openings. You might also mean Barnes resident Sir Tim Rice, but, although he co-wrote the musical "Chess" he also didn't, to the best of my knowledge, give his name to an opening variation. Perhaps he should, though.

A quick note to say that we will be posting every day this week.

You have "Eugene Edward" in the article - he was Eugene Ernest.

Thanks Richard for the corrections. So many Rices! the King's Gambit man was the one I was thinking of; but as you point out, not an Englishman. Could we try Wormold instead?

I've corrected EEC's name in the post out of respect for him. Careless of me to get that wrong.

Olimpiu has been in touch with another correction: Dr. Yeoh "was a medical assistant in the camp [not an internee]. The Japanese occasionally relied on external doctors/medics to check on internees and I suspect it was easier for them to rely on Singaporean Chinese ones. He was one of them who most likely visited the camp regularly but was living in Japanese-occupied Singapore town. They knew each other from the days of the pre-war Singapore Chess Club of the 1930s however."

Olimpiu adds that he did a Yearbook Survey on the Colman Variation after the book was released (accessible via this link:"
www.newinchess.com/Archives/SurveysList.aspx?PageID=221". He says that he "and Ceteras organized a correspondence tournament with 8...Rb8 among 10-12 strong Romanian correspondence masters and then we published the findings, games, statistics, novelties etc in the YB. They were armed with theoretical books, all games on the variation, strong engines and a previous article by der Tak (who was saying White still has something in that line). Took us two years of waiting but it was worth it. An awesome tribute to Colman's line. We found a dozen strong new ideas that simply took the life out of 8.Qf3 at 2400-2700 level. For good, I think."
So White really had hit the buffers!

Thanks both for the corrections.

Wormold? I don't think so. Wormald, possibly, but beware. Curiously there were two players/writers called Robert Wormald. Robert Bownas Wormald, the one you want, was the author of "The Chess Openings" (1875) while the mid 20th century Worcester player Robert Douglas Wormald was the co-author with Bonham of "Chess Questions Answered" and "More Chess Questions Answered". To the best of my knowledge the two were not related.

Streatham are playing Wimbledon in the Surrey League soon. I offer a reward of half my kingdom (current value: £0.29) for anybody who plays this line in the match.

Perhaps we could all agree to make it a Colman theme match - and clean you out.

Sorry Martin! It's just the rather strange way my brain works!

IM Friedberger of Sussex was quite a tasty player I've heard!

Great post. I have a copy of the 1953 Chess Review article in my "blog ideas" folder, and long had a plan to do a similar post -- though I was thinking of including current games with the Qf3 line. Glad to see this material published.

On the missing games of Colman v Marshall 1911: in fact Olimpiu Urcan has found them in The Straits Times of that year, and published them in Edward Winter's Chess Notes #6577

Interesting thread. My father David Falkus collected Eugene who was his uncle from the docks when he arrived back in the UK after his captivity. I have a photo of him standing at the foot of the gangway looking into the distance. I would happily share this if anyone would like a copy. Paul Falkus