A Literary Reference : A Long Lunch 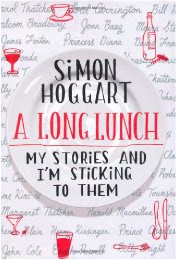 This was all slightly disappointing, from a man who once would willingly have grabbed what sleep he could on a filthy mattress in the back of a van as it cruised down the M1 at four in the morning. So I asked about the game, Mornington Crescent. Ah, he said, people always asked about that. "I say to them, you wouldn't expect me to explain the rules of chess in the interval at a jazz concert, would you? Well, Mornington Crescent is much more complicated than chess."

It had been invented when the programme had a producer whom they didn't greatly like. They had been having a few drinks in one of their hotel rooms, and had heard him coming down the corridor. "Quick," somebody said, "let's invent a game which he won't understand." Which they did.

Quite a number of reporters either made their names in Northern Ireland, or went to work there at some stage in a celebrated career. Max Hastings and John Sergeant are among the best known. Tim Jones worked for The Times and was a fine chess player as well as a resourceful reporter. His main problem as a chess player was finding anyone sufficiently challenging to play against. His boredom had resulted in some damage at the critic Bernard Levin's flat while he was playing him in the paper's chess tournament. In the tedium of waiting for Levin to play he took to rocking back and forth on a valuable Chippendale chair. Levin was, apparently, gracious about its broken leg.

Tim had been present at the early riots in Londonderry and was called back to give evidence to the Scarman Tribunal, held in the city itself. He had been told that his session would begin on a Monday afternoon, so he refrained from drinking. He wasn't called that day, so he abstained the next day too. By Wednesday lunchtime he was giving up hope, so had a generous and restorative lunch. When he had to give evidence that afternoon, things did not go entirely to plan. At one point the brief for the tribunal asked him if he could confirm that he had seen a rioter throw a brick - here he pointed at a map - at this location here, which had hit a soldier standing at that location there.

"Are you aware, Mr Jones, that that is a distance of one mile?"

[A Literary Reference index]
[Thanks to Tom]
Posted by ejh at 7:55 am

Simon Hoggart's son was a member of Richmond Junior Chess Club for several years as well as playing at school. At some point I should compile a list of celebs whose children/grandchildren I have taught or seen at tournaments.

But did you know his father?

I vaguely knew Simon, but not Simon's famous father, after whom his chess-playing son was named.