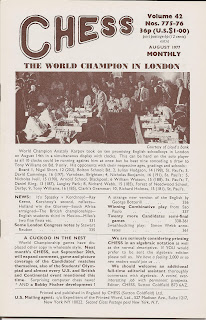 The Nigel Short simul tour comes to an end in Gatwick tomorrow afternoon. It's obviously been a hugely popular event - 177 games played in the first leg, 51 games played as of Sunday in the second - and a great success. In fact, the only bad word that anybody has had to say about the tour itself comes from the star of the show:-

The little brat kept offering me draws by thrusting out his arm, which induced great mirth from his Dad as my displeasure increased ... Afterwards two parents quietly informed me that they were almost certain that his father had been communicating moves to him from a hand-held computer.

Receiving multiple, frequently inappropriate, draw offers is part and parcel of chessing with munchkins, but silicon-assisted cheating is an entirely different kettle of pawns. Fortunately, Short makes clear that the incident was very much a one off with the vast majority of his opponents being impeccably behaved. 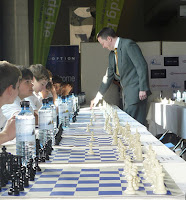 Come on then, I'll take you all on
Photograph from ChessVibes

It's good to see the 'big event' simul making a comeback. The 1970s was the Golden Age for such things, just as it was for just about everything else to do with chess, and thirty years ago a succession of leading Soviet Grandmasters made their way to London to take on the cream of the British juniors.

At the top of today's blog we see CHESS reporting the Karpov's simul in 1977 (this, by the way, is the one that made it all the way to the front page of The Times - see WwwK XVI). Let's take a closer look at who Anatoly was playing ...

... and, while we're at it, who was there taking on Spassky a couple of years later? 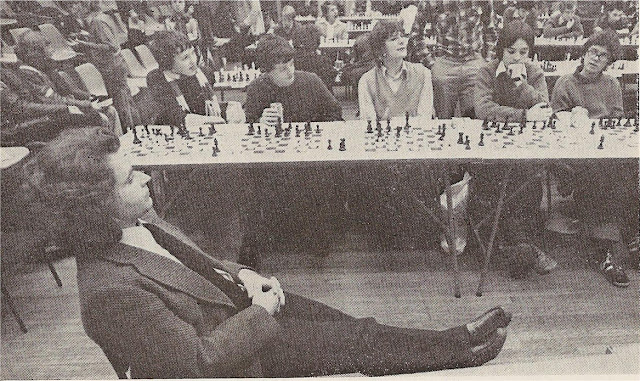 Good to see Boris putting his back into it. Anyhoo, if you were at any of this year's simuls and took photographs, please keep hold of them. The S&BC Blog might be needing copies when we publish Untitled simul post II circa 2045.


STOP PRESS:
An extra date has been added to the tour. Nigel Short will be at Drunken Knights' London HQ - The Plough in Museum Street - tonight from 7pm. I gather all boards have been filled, but spectators are welcome so do go if you find yourself in town and at a loose end. I wouldn't mind popping along myself, although, in the circumstances, probably best that I give this one a miss.

I got Boris's autograph at that simul. Apperently he wasn't signing autographs but somehow I managed to get one. Those simuls I think were tied in with the Evening Standard junior tournament prize giving. Think they had 3 different simuls going at the same time.Seriously impressive achievement to get the likes of Karpov and Spassky over to play simuls, especially as the Cold War was in full swing. Can't remember all the people I played, but think they were mainly British players. I did however play Hort,Polugaevsky and Krogius in other simuls.
"Nigel" won't have any idea who you are Jonathan. Reckon you would be pretty safe to go along tonight!
Andrew

One board has just become available for tonight in both 7pm and 9pm simuls. Please contact me on 07973 119119 if interested.

"Nigel" won't have any idea who you are Jonathan

How very dare you.