Every Picture Tells A Story: The End, Part 2

Blog 20. We finish with a joint effort by Martin Smith and Richard Tillett.

It is a year (almost to the day) since our first Every Picture Tells a Story blog appeared and now it is time to sign off this series. However, our work continues – there are articles to write and a talk to give next March to the Hereford local history society, and more research to pursue.

We thought we would finish with the man at the centre of our story, the little-known artist Thomas Leeming, who painted himself as the standing figure in his picture of the gentlemen chess players of Hereford. 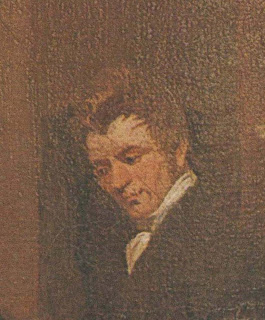 The artist…
Five days after Leeming’s death on 24 May 1822, at the age of around 33, a short anonymous obituary appeared in the Hereford Journal, which we discovered at Hereford Library on one of our visits to the city. It remains the only commentary that we have been able to find about him, either by a contemporary or by a later writer, and it tells us much about his painting, the range of his work, and his standing as an artist at the time of his death.

The author of the obituary was almost certainly Edwin Goode Wright, the proprietor of the Hereford Journal and one of the chess gents in the picture. He was an admirer of Leeming’s talents and may have commissioned what we think is the first version of the picture (the one held at Hereford Museum and Art Gallery). We think he also commissioned the portrait of “Mrs E G Wright” that Leeming exhibited at the Royal Academy in 1821. 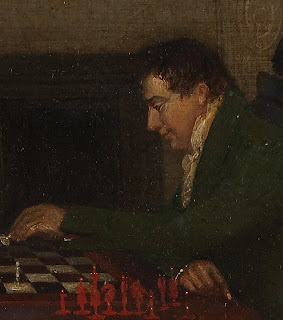 Leeming was, the obituary tells us, “an artist of great natural talent, which he had improved by study, and matured by practice, and as a miniature painter, he would probably in a few years, have been at the head of his profession; if his life had been prolonged”. Hmmm. “Great natural talent” perhaps but the few miniatures we have tracked down, though competent, fall a long way short of the exceptionally high standards set by the best London portrait miniaturists of the time. We doubt he would ever have bridged the gap.

“The productions of his pencil were remarkable not only for their striking resemblance, but for their delicacy of finish, and expression of character, which so few artists attain.” Sadly, as far as we are aware, no drawings of his survive.

“He also excelled in portrait and landscape painting in oil and watercolours, and has left numerous records of his genius, which bear flattering testimony to his skills and taste.” We have found only one, rather average, landscape and one, considerably better, full-size portrait (the one of John Grosvenor discussed in blog 19). We’ve not found any watercolours, unless you include a modest wash sketch held in the collection at the Hereford Museum and Art Gallery.

“As a copyist, he was perhaps excelled by few in England.” That may well be true. He certainly did a splendid job with his copy of Valdés Leal’s Christ Carrying His Cross (blog 10) and we would love to track down the copy of Raphael’s School of Athens which, according to the obituary, was unsold at the time of his death.

Here, then, was an artist of talent who was, to quote the obituary again, still “arriving at that perfection”. In his short career he maybe spread himself too thinly: working in London, Hereford and Oxford; running a London house and, from 1817, supporting a wife and family; with poor health to contend with in his last years. The odds were stacked against him in a cut-throat market where miniaturists were two-a-penny, and without high-end clientele you were likely to struggle. His style was resolutely traditional, which may have suited his middle-of-the-road customers but failed to impress the London elite. Perhaps, as his obituarist implies, he was robbed of the time necessary to achieve his full potential. But even with twenty or thirty years more – such contemporaries as Lawrence, Constable and Turner lived into their sixties - we are not sure that his reputation would have blossomed, nor that posterity would have judged him more kindly.

And what of Thomas Leeming the man? The final sentence of the obituary is all that we know of his personality, but it tells us much:

“He also possessed a talent for music, and was warmly esteemed and respected by an extensive circle of friends in different parts of the Kingdom, to whom his excellent heart, gentlemanly conduct, and unpresuming manner, had greatly endeared him.”

A fine fellow then, who gave us what we think ranks among the finest and most significant chess pictures of its – or indeed any – time with its lively portraiture, skilful composition and ordering of the characters, fidelity to the facts of chess, and evidential value to the history of the game.

We end our series with the version he painted for the Royal Academy exhibition of 1818. 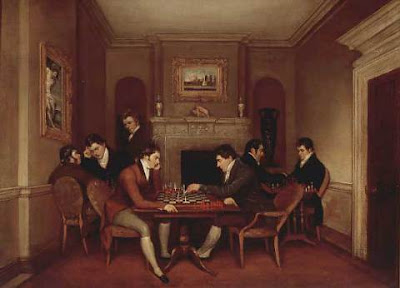 Every Picture Tells A Story Index
Chess in Art Index
Posted by Martin Smith at 11:00 am

Well, what can I say? I don't suppose any chess-in-art work has ever been so exhaustively analysed. Hurrah for scholarship.

Many thanks to Martin and Richard for their outstanding research and well-written articles. Hurrah for the Bedlam brigade from S&B.