Knights on the rim are Morgan's

Well not for my friend and fellow blogger Morgan Daniels they're not. For Morgan, whatever Siegbert Tarrasch might tell him, developing knights towards the centre of the board is naught but some kind of middle-class affectation. For Morgan, sticking them on the edge isn't so much a possibility as it's a requirement. Once I saw him open with 1 P-KN3, 2 B-N2, 3 N-KR3 and then follow up with 4 P-QB3. I asked him why and he replied, "So I can play N-QR3 and N-QB2, of course". Obviously.

My own attitude, I'm afraid, is somewhat more bourgeois. Increasingly so, in fact.

During the 2007/08 season I played both my knights to bishop three less than half the time (18 of 40 games), but by 2010/11 the figure had jumped to 78% (27/35). In the games I've played so far this season it's up again (82%; 31/38) and that's not the end of it. These days, of the knights that I don't develop to their traditional squares I'm only playing about one in eight to rook three which is about half my rate for the last four years as a whole. Guess who's going to be first against the wall come the revolution. 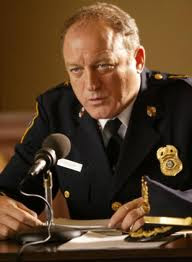 If the way Morgan and I like to play chess is ever going to come together it's going to be in Mike Basman's old pet line of the Leningrad Dutch.  The Basmaniac system, you see, manages to combine my love for defences against queen's pawn openings which are based on an early ... f7-f5 and Morgan's creative use of his knights 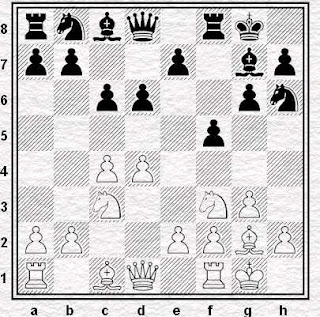 Black gets a standard Leningrad set-up save for the king's knight which has gone exploring. It looks strange - well, it looks strange to me; I doubt Morgan would bat an eye - but according to Basman,

It's not just the king's knight, either. Basman usually followed-up by playing his queen's knight out to the edge too. After 8 e4 for example, 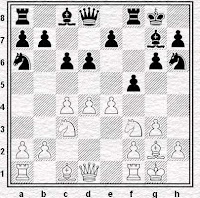 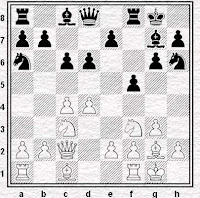 Interestingly Raymondo - a leading theorist at the time, lest we forget - achieved nothing more than a short draw despite having months between the British Championships and Hastings to come up with something against Basman's system. A couple of years later Keene even adopted it himself when desperately seeking his final GM norm at a tournament in Spain.

Basman's Leningrad might just be another of his ropey openings, but it's one of his better ideas and RDK's failure to dent it, not to mention his subsequent patronage, is surely some kind of endorsement.  That's what has tempted me to give it a punt myself, I suppose, although I've never quite managed to persuade myself to do it.  I guess, when all is said and done, it's simply more Morgan's kind of thing than mine: he's got the creativity gene that you need to play this kind of stuff and I haven't. 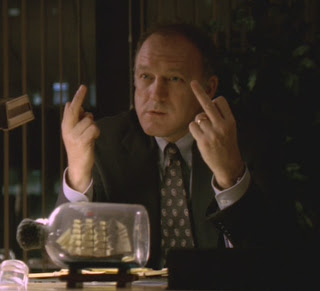 Last Halloween, we covered Korchnoi's tale of playing a game of chess with the long-dead Geza Maroczy. This year's ghost story is an encounter between Morgan and Tarrasch.

I've often imagined it: the erstwhile German chesser hanging around at Golden Lane, keeping an eye on the games. He's bound to be there. He's got an eternity to fill, after all, so he's going to take his entertainment wherever he can find it.

Sooner or later Tarrasch is going to find himself at Morgan's board. It's inevitable and when it finally comes to pass our man will feel the old master's presence at his shoulder and will turn, nodding towards his knights as he does so, and whisper,

You see these Siegbert? You see 'em? These are for you.


Basman quote taken from The Leningrad Dutch, Tim Harding (Batsford, 1976)
Posted by Jonathan B at 8:00 am

Not knowing the first thing about the Leningrad Dutch, the thing that puzzles me most is the mixture of descriptive and algebraic notation in the quote that you give...

Yes, that struck me too.

The 1970s was an interesting time for chess publications (in Britain at least) regarding the use of old descriptive or algebraic notation. It's a subject that will get a post one day.

Regarding the mixture of notations, most if not all of the then stronger and younger players would think about positions in algebraic, even if conservative publishers forced them to record actual moves in descriptive.

So a knight on f7 defends the squares d6,g5 and h6. However White plays P-Q5 as a move, which Black meets with P-K4 (or vice-versa).

I assumed the use of descriptive notation was purely to annoy our younger readers.

Don’t know about the younger readers, but it certainly annoyed me! ;)