Every Picture Tells A Story: The End, Part 1.

Blog 19 in the series. This one mainly by Richard Tillett

We are nearing the end of our story. And what a story it has been. Our research has taken us far and wide - to the V&A archives, the Courtauld Institute Library, assorted Hereford galleries, libraries and archives, the National Chess Library in Hastings, Westminster City Archives and the London Metropolitan Archives… till our wallets bulged with reader cards.

It’s been, for both of us, an extraordinary journey during which we’ve developed some (rudimentary) skills in historical research, met engaging and knowledgeable people, and experienced at first hand the excitement of historical discovery.

It was almost a year ago when our first blog appeared, when we described how we got so absorbed in the mysteries surrounding this picture of the gentlemen of the Hereford Chess Club, previously obscure but now better known (at least to readers of this blog): 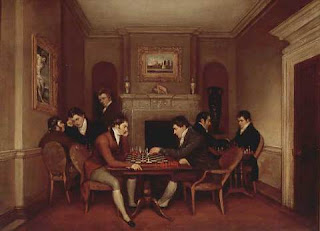 We researched its background and ownership in blogs 2 and 15, and we discovered not one but three versions of the picture (blogs 3 and 4). We established the identities of the figures depicted in the painting, and that the artist, a little-known London painter called Thomas Leeming, included himself in the picture as the standing figure (blogs 4, 5, 11 and 12). We uncovered much previously unknown information about his short life and close links with Hereford society in the second decade of the nineteenth century (blogs 6 and 7). We looked at a later generation of Hereford chessers, the gents who organised the 1885 international tournament (blog 16). We found out more about Thomas Leeming’s art from a contemporary obituary, and discovered that he painted an altarpiece for Hereford Cathedral (blogs 8 and 10). We took a magnifying glass (literally) to the detail in the pictures, including the chess position in the foreground of the picture and the paintings on the walls (blogs 9 and 13).

We found many fascinating side turnings along our journey. We stumbled upon chess paintings we didn’t know about (blogs 17 and 18). And in blog 14 we started to explore the early history of chess clubs. It seems that the Hereford Chess Club depicted in the painting, founded in 1812, is the earliest known provincial chess club in England bar one – the short-lived Brasen Nose Chess Club in Oxford which was founded two years earlier. This blog has recently attracted some interest on the English Chess Forum, where Knowledgeable Chess Gent (KCG) Ray Collett started a lively thread. A further KCG, Tim Harding, has added to the discussion on his blog. With the help of yet another KCG, Brian Denman, we’ve tracked down some early records relating to the Brasen Nose Chess Club and we will be inspecting them soon. If we find anything of interest there, readers of this blog will be first to know.

Our research into the life and works of Thomas Leeming continues. We haven’t yet tracked down his Lancashire origins and we are trying to identify and attribute his surviving paintings. The latter task took us to Oxford in September and the unlikely location of the John Radcliffe Hospital, following Martin’s discovery that the hospital trust owns this portrait of John Grosvenor (1742-1823), surgeon and publisher of Jackson's Oxford Journal. 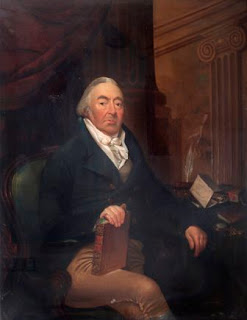 The picture hangs in a public corridor at the hospital alongside other portraits of figures from the hospital’s past together with more recent artworks, curated by the very helpful Ruth Charity, arts coordinator for the Radcliffe group of hospitals. Ruth told us what was known of the painting’s history and its recent restoration. It is unsigned and the artist was previously unknown but we are confident it was painted by Thomas Leeming and is the “Mr Grosvenor” that he exhibited at the Royal Academy in 1812. As we noted in blog 6, Leeming co-published a mezzotint print of the same sitter executed by Charles Turner in the same year: 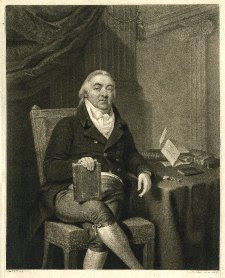 The two images are similar enough for us to be confident that the painting was the inspiration for the print. The main difference is the amputation of the eminent surgeon’s legs below the knees in the painting, which we think unbalances the composition. We have a possible explanation: at some point in its history a strip may have been cut off the bottom of the canvas so that it could hang in a confined space (it being a large and imposing painting), losing not only the doctor’s lower legs but possibly also the artist’s signature.

In the next and final blog in this series, we assess Thomas Leeming, the artist and the man.