Champagne Season in the London League: Part I 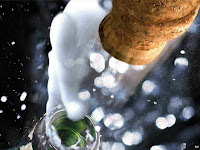 All the moves have been made, each game finished, the final league tables decided, the boards put away for summer: and so it's time for Streatham & Brixton Chess Club to look back over the 2006-7 season that was in the London League, and which turned out to be a rather good one for us.

So without further ado, kicking off today here is Second Team Captain Chris Morgan's summary of a season to savour...

It was our first season in Division 3 of the London League, having been promoted after topping Division 4 the previous season. We started as we had left off by winning our first game against West London 7-3. Performance of the night came from Tom on board 1 who comfortably drew his game against a 180 grade.

Then came Club Capablanca from North London, who disappointingly edged us 5½–4½. This was a match we might have won but it wasn’t our night. But our next match was a tricky one against East Ham, who had been in Division 2 the previous season. We put a very strong side out for this one and we won the match 5½–4½.

Next we played our rivals from last season, Wimbledon 2 who were also promoted with us. We must have improved form last year as we had a resounding victory, 8-2; Alan, Jonathan, Bob, Martin C, Dave V and Barry all getting results against higher graded opponents.

After that was Albany - and we lost this one 6½–3½. They were also contenders for promotion this season... And by the New Year we were starting to lose players who had become ineligible, due to having played a number of games for the First Team. But we continued to battle well in our next two matches - edging out Wanstead 2 and Battersea 1, 5½–4½ in both.

We lost our next match 6-4 to Metropolitan 2 and then another to Metropolitan 3. Perhaps they had had some tips from their second team club mates - as on paper we would have been expected to win this one!

Even though we beat Beckenham & Charlton 6½–3½ in our next match, promotion was looking highly unlikely after our losses. But we finished the season as strongly as we had started and came back to win our last match of the season 7–3 against Hackney 2, who were also pushing for promotion. There was a notable performance from Matt on board 2 defeating his higher rated opponent.

Having finished all our matches we were still holding on to second in the table and a promotion spot, but it was looking as if one or two teams would overtake us. It was an exciting end to the season, as we awaited results from other matches. And remarkably... things went our way and we finished second in the table to guarantee promotion to Division 2 next season.

This was a fantastic achievement as Streatham 2 was only formed two seasons ago, when we entered Division 4. Everyone contributed points throughout the season, and our top performer in terms of results was Alan Hayward, scoring 7 wins, 2 draws and 0 losses in his first season for us.

I'm very much looking forward to division 2 next season. Well done all.

... and tomorrow we'll have Martin's summary of the how the First Team got on.
Posted by Tom Chivers at 5:22 pm

Quite an incredible achievement.

Division Two will be very, very hard, I think, but that's people's reward for playing so well.

I could not be more impressed.

Excellent captaincy throughout the year.

Fantastic result - even better than last year's. Well done Chris and the team.

A great result... team performance of the season has to be the crushing of Wimbledon 2.

Note that we had only one default all season - Albany, in comparison, had nine and lost a crucial match point: another year of inspired captaincy from Chris.

Yes, we were lucky but good teams make their own luck!