The number of visitors to the blog always drops over the weekend. Therefore - and to further encourage that trend - here's just a few little chess things that caught my eye recently.

Number one, you can watch The 4NCL Live right now. Alas, they're only covering eight games - meaning you don't get to watch how a certain chess blogger is getting on in his. But the rather exciting encounter between Rowson and Navara ought help compensate.

Number two, Hackney Chess Club's second team lost their match versus West London 2 in the Middlesex League Division Three: meaning, promotion to division 2 is denied to them, and Hendon seconds go up instead. So what? Well, this turn of events is, apparently, comparable to Manchester United's exit this week from the Champions League in the San Siro. I guess that makes West London the AC Milan of London chess. Who knew?

Finally via Chessalicious, I rather liked this photo: 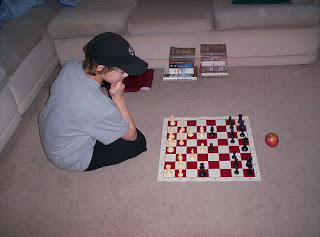 Incidentally, I wonder what happened to Chessalicious? Since an initial flurry of amusing posts toward the end of March - nothing. Maybe when you've lost a game to an apple, it's time to give up.
Posted by Tom Chivers at 4:34 pm

I lost, to Michael Franklin, much as I did in a Surrey League match last year.