I have been rather shooting my mouth off of late. Not satisfied with claiming to be the strongest player in the world (see comments to this post), I also found time to suggest I should be credited with the invention of a variation of the French Defence that virtually forces the win of a pawn.

Sadly those that are usually alleged to be amongst the world’s best players continue to avoid me in battle so the only evidence I can produce to back up my claims is to look at what happens when they take me on by proxy – how, in other words, do they get on when challenged with my variation?

After a few days nurdling around Chess Megabase 2007 I found many examples of World Champions taking on 5. … cxd4. Let’s take a look.

Once again, the opening moves are:- 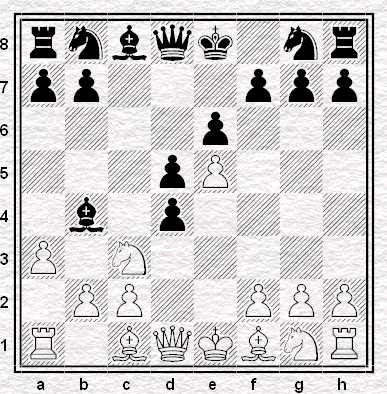 Lasker is our first customer who, as I noted last time, faced this line against Maroczy in New York, 1924. Lasker played, 6. axb4 dxc3, 7. bxc3 Qc7, 8. Nf3 Ne7 and went on to swindle a win in 50 moves but, notwithstanding what Chess Psychiatrist Chivers had to say about this line at the pub quiz last Sunday, most sources assess the position at move 8 as already slightly better for Black.

Botvinnik played exactly the same line against Model at the Soviet Championship of 1927 but he was less fortunate, having to resign on move 47. Interestingly enough, after four years to think about it the old Soviet decided the idea was worth a try from the Black side and he used 5. … cxd4 against Yudovich in the 1931 Championship. The game went 6. Qxd4 Nc6, 7. Bb5 to which Botvinnik responded 7. … Ba5 and went on to win in 44.

History doesn’t relate how many other games Bobby was playing at the same time as those given above but is that really an excuse? In any event, Kasparov didn’t do much better and he faced the line in a real game. It was at the Soviet under 20 championship at Riga in 1977 that Efimov tried it against him. As with Fischer’s first try, Gazza played the most critical response 6. axb4 dxc3, 7. Qg4 but here Efimov varied with 7. … Ne7, 8. Nf3 Nf5 and the game ended in a draw in just 17 moves.

So there you are. In 7 games involving World Champions and the move 5. … cxd4 the results amount to + 2 = 2 -3. In fact it could have been much better given that one of White’s wins resulted from Black playing a clearly inferior sub-variation and the other was a streaky victory after coming off worse from the opening.

I’m sure there will be some cynics and agitators who try to emphasise the fact that some of these games were from simultaneous displays but I think the underlying message is there for all to see. Isn’t it time for the chess world to wake up to 5. … cxd4 and award it the “!!” it clearly deserves?
Posted by Jonathan B at 9:35 am

Another nickname I see. Better than 'Gentle Tom', worse than 'Chess Thug Chivers'.

Psychiatrist and Thug are not necessarily mutually exclusive of course.

You're not kidding (an ex-psychiatric patient writes).

But only 'Psychiatrist' is an insult.