White to play - how did the game go? III 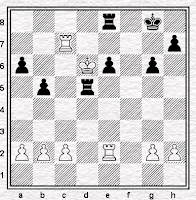 Is it possible to overlook that you have actually delivered mate? It surely is, just as it is possible to think you have been mated when in fact, you have not. In fact, precisely this event occurred in a game a few years ago featuring a contributor to precisely this blog. The diagram is taken from the game Bryant-Crouch, London League (Division Two) played on 23 September 2004, in a match which Streatham and Brixton ultimately drew.

If my memory serves, this may have been because Dave Varley's opponent failed to turn up for a second session in a position where he was winning, this fact, if fact it be, providing a pleasing link back to our original theme (or somewhere near it). Indeed, one of our opponents in the match currently under discussion was the player of the White pieces in our previous "how did the game go?" feature - and he was playing, in this match, the subject of another of last week's postings. Spooky coincidences, no? Somebody tell Jim Plaskett.

Anyway, back to the diagram, which occurred shortly after Jonathan had lost back a pawn which he had only just won in his opponent's time trouble. Black has played Rf5-d5, the third check in a row with that particular rook, which has been driving White's king up the board. I imagine most readers - except those who have worked out that this series does not tend to involve "best play" - just as they must have spotted that Qf8 mate was obvious in the previous position from this series, will have spotted that Kc6 is both obvious and compulsory here, being, as it is, the only move. What Black should do then, since he is out of sensible checks and possibly vulnerable to the manouevre 1.Rf2 Rf5 2.Rd2, is not entirely clear, though your suggestions are welcome.

Jonathan briefly took stock of the possible squares his king might move to, and seeing them either attacked by his opponent's pieces or already occupied by his own, concluded that his king could not escape the check and was therefore checkmated. "Ah", he said. "That's most unfortunate." And he held out his hand and conceded the game.

Clearly a traumatic experience. Jonathan appears to have erased it from his mind entirely.
Posted by ejh at 6:30 pm

Was that really me?

I seriously don't remember it at all. When I read "Bryant-Crouch" I thought - I'd better post a comment to make clear it wasn't me.

But if you take a brief glance at the comment on the link to the piece I originally wrote on my blog....

Well I suppose it must have been me. Two and a half years ago - but that's not so long is it. Mind you,