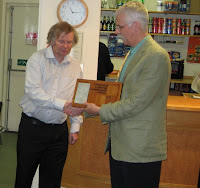 Robin Haldane emerged as the winner of the 2007 Streatham & Brixton Chess Club Championship on Tuesday, after a tense second half of the competition that once again saw no draws, and which was ultimately decided in a blitz play-off. He won a first prize consisting of our spectacularly unspectacular Trophy, and free membership of the Club for next season. Congratulations also go to Chris Morgan, who won the second prize - again free membership for next season, again in a blitz play-off - from the under 100 grade section. 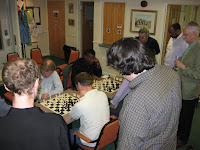 Robin was certainly a worthy winner. He'd had the toughest of the pairings in the competition, in which he faced the top four highest-rated players (excluding himself) - beating three of us but losing to Carsten Pedersen. Carsten, however, had previously lost to myself, whilst Adam Fysh-Foskett had lost only to Robin. This trio then were left on 5/6 at the end of this two-leg event, so battled on for outright first in three five-minute blitz games. And by beating both Adam and Carsten in his two, Robin was crowned Champion. There was a similar story for the second prize for players graded under 100, where Chris Morgan, Barry Blackburn, and Stan Rodrigues all finished with 3/6, and where Chris also won both of his blitz play-off games. A photo of the blitz games in action is to the left of this paragraph. 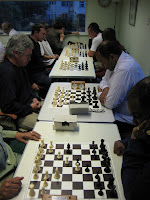 What else? The tournament was well-run and organised by our Club President, Angus French, whom we all owe a big thanks. A good-natured, friendly atmosphere pervaded both evenings - away from the violence on the chess board, that is. And the tournament proved an especially good opportunity for Streatham & Brixton Chess Club members such as myself to get to know more players from our neighbours at Streatham Chess Club. 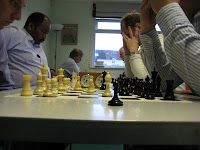 Finally, I hope everyone who played in the event enjoyed it. And if you didn't play - how about next year?
Posted by Tom Chivers at 7:54 pm

Congratulations to Robin and Chris.

Hmm... In picture 3, on the board closest to the camera, it looks like Barry has had three moves and his opponent (Nasr, I think) five...

Good spot - but I suppose the bishop could have taken two moves to get to b4, for reasons Barry may be the best person to explain...

Via d6 to provoke the French pawn structure, rather than accept a gambitted e4 pawn? Tres subtle.

Is it time to declare the French the Official Club Opening?

Also, at the risk of perpetrating a libel:

Robin looks a shade 'tired and emotional' in the photo of him collecting his trophy from Martin. Winning these tournaments must take it out of you!

Well, I'd vote for the Haldane Hack being the official club response to Classical French.

Also, in the photo position, I suppose after another pair of moves (Be7, say, and something else), it might have looked as though Barry had had three moves to his opponent's six.

Just realised. It's not Barry in the picture but Marc. D'oh.

In summary, here are the final scores:

I'll produce something more detailed once I've got everything together for the grading submission for the ECF.

A question: The trophy engraving lists Martin Smith as the previous winner of the Club Championship in, ahem, 2001. We believe Chris Jones won it subsequently but does anyone know in which year (so that we can update the engraving)?