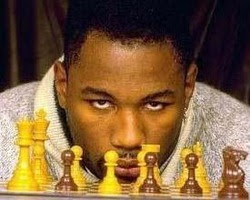 Have you ever felt, during a chess game, a strong urge to punch your opponent in the face?

If so, good news. The door of opportunity is opening for you to do just that, as The World Chess Boxing Federation is recruiting, report The Times.

But there's a catch:

According to Wikipedia, although invented only in 1992, there is already a mounting crisis in the game because “there are long-term concerns about it [chess boxing] being dominated by boxers with little or no chess skills, given the present set of rules. All a player has to do to win without any chess skill is to take only one chess move in the first chess round, then in the first round of boxing knock out their opponent to win overall. Thus, it is possible for a chessboxer with virtually no chess skills, but phenomenal boxing skills, to dominate the game.” . . . You know I sense a bit of a flaw with chess boxing, don’t you?

Maybe, maybe not. It would certainly change the odds in those typically uncomfortable games with talented little juniors. On the other hand, how awful would it be to face a lady player?
Posted by Tom Chivers at 5:53 pm

I detest violence in all its forms - although there are certain people for whom I'm willing to make an exception.

Most of the time I'd rather not get the fisticuffs going over the board. I prefer simply to call my opponents [word banned by blog editor]s as and when they deserve it.

A chess-profanity championship ... that's much more my cup of tea.

If you detest violence in all its forms - this might not be the best news for overcoming your problem of form re attack and defence . . . ?

At last! Chess i could actually play! *headed your way to learn a single chess move*

Well, Robin does his 'talking' on the chess board with 'right hook to rook 5'.