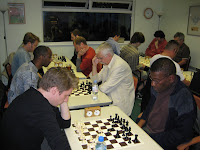 The first half of Streatham & Brixton Chess Club's 2007 Championship took place last night, consisting of three rounds of quick play chess, down at our venue in Woodfield Grove Tennis Club. Eighteen club members took part including myself - and boy were we all in a violent mood. Of the 27 games played, none were drawn. Take that, super tournaments. 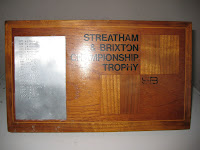 At this half-way point, Robin Haldane and Martin Smith stand jointly in the lead with 3 out of 3 - the chasing pack a whole point behind consists of myself, Adams Woodruft & Fysh-Foskett, Carsten Pedersen, Barry Blackburn, Chris Morgan and Stan Rodriguez - from our neighbours Streatham Chess Club. We find out next Tuesday, with battle recommencing at 7.30pm, who will get their name on our fabulous Trophy. (Alright, alright, I admit it. It's somewhat less than sparkling. Still, if you click the image to enlarge, you should be able to make out some rather starry names from the club's past.) 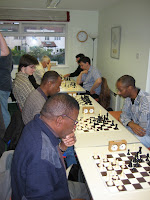 But the winner gets more than that eternal engraving, of course. First prize features not only free membership of the club for next year as well - but far more importantly, bragging rights. That's included with second place too, which is a grading prize consisting also of free membership of the club for year. The grading prize will be awarded for the best performance by a player graded under 100 (actual or estimated). 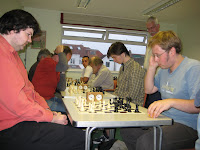 By the way, for those reading from outside the club who might be strange enough to wonder what the present writer looks like in person, all is revealed in the final image of this report, to the right. I'm the chap in the blue t-shirt. (The one doing, if you look closely enough, something rather strange with his hands.) And on the subject of gruesome spectacles, here's my final round defeat at the hands of Robin for your amusement...

See you next week fellow competitors - for another fun, friendly, night of violent chess!
Posted by Tom Chivers at 7:40 pm

So it looks like the next round will be crucial. Winner of Smith-Haldane will be a point clear with just two rounds to play.

I'm really disappointed I couldn't play this year. It sounds (and looks) like you're all having fun.

Fingers crossed for a top board draw!

it was nice playing actually

i have to do better next tuesday

tom where did you get those earplugs ?
alexey hurricane

Tesco! Something like £1.80 for 6 pairs, including the orange travel case thing.

I realised recently I am very sensitive to noise during chess - and I have the anti-concentration habit of simply listening to it when it happens, to. So, I decided to try these out as a technological solution. I think they help.

Did anybody punt The Variation?

*Jonathan*
When I play Robin in the next round I will be black, so could punt That Variation - but he'll in all probabaly side step it with 4.Ne2: you'd expect him to take the earliest opportunity to sac a pawn against the Winawer.

But you'd be the moral victor Martin ;-)

does any one got like tips to play rapid games?

My tip: Botvinnik didn't play lightning chess and neither do I.

Jesus Christ mate, that's a real walloping that one. Anyhow, you guys still use those BHB's?

Also, and maybe you already posted the details before but where is your club again and how do I get there from Victoria? I might be back in London again, just for a few days or so, in November.

BHB's are wind-up clocks I see from google. We do still use them, yes. Very few people seem to have moved to electronic clocks, although Guildford Chess Club & Chessabit use them. I wonder what the BHB stand for?

As for our venue - you're welcome to visit of course, but we mostly play serious games there in various competitions, so I'm not sure how much fun it'd be for a spectator... Up to you of course, and you can find directions here.

You should basically be able to get a train from Victoria to Streatham - and then it's not a long walk.

I'm sure I did. I'm basically a complete idiot with directions and transport and all that stuff.

What does BHB stand for? It's a good question. The company that has been making these clocks since 1950 is "Borcherdt GmbH / BHB Chess Clocks" and is run by Angelica Borcherdt in Hamburg, Germany. BHB may stand for Bremer Hausbau Baubetreuungs - or it may stand for something else! Adam

Thanks Adam. I don't think I'd have managed to guess that, although I was trying.