White to play - how did the game go? II 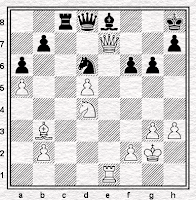 Our position yesterday - somewhat frivolous in nature, I accept, but this is both the weekend and a blog - was a puzzle, but not in the traditional sense. Because the answer, the winning move, is obvious. And if the answer is obvious, is there any puzzle here at all? The answer is obvious, so what's the question? Or put another way - what's the real question? I wonder. Perhaps it's something like this - why might the winning move not be obvious?

Let me explain. The position comes from a match I played for Beckenham, in the Kent League, early in 2006 at Charlton House. My game had finished shortly before and in fact the time control had been reached. Those of us without moves to seal went to have a look at the games that were still in progress, as the match was close and the result depending on the remaining games.

This position came from a board below mine - from memory I think I was on board three and this may have been board four. Our player had the white pieces and was, as I say, to seal his next move. While he pondered, so did we, considering the various options, a queen exchange perhaps, or a retreat, or leaving it there for the while. White was a good pawn up and surely should not have too much trouble winning from here.

After perhaps two or three minutes, something occurred to me and I signalled to my team captain and board one, a very good player with an ECF grade in excess of 200, to come away from the board for a word. When we were a good distance away, I said to him:

Am I missing something, or is there a mate in one there?

I suppose I was expecting a reply along the lines of "yes, of course there is, I saw it immediately, did you not then?" or words to that effect. What I didn't expect was:

followed by a scurry over to the board, a subsequent return and so there is!
This routine was then repeated more than once with other members of the team, none of whom had seen the mate, until our player, with some degree of embarrassment and some degree of relief, spotted it himself and played it on the board. (I suppose he could have sealed it, in fact, but he's not really that kind of chap.)

Amaurosis scacchistica and on a multiple scale. Why would several players, all of them capable and some of them reasonably strong, miss a mate in one? Perhaps because the player at the board didn't see it: perceiving only thought, the spectators assumed there must be something to think about. On the contrary, seeing only a diagram, I would guess that the readers of this column saw only a mate in one. When we see a strong player make a bad move, our first thought is that they have seen something we have not: we see the player, not the board. Like a magician's feint, the player distracts our attention from the board. The truth, however, is in the board and pieces: errare humanaum est, it's the players and those who trust them who make the mistakes.
Posted by ejh at 2:00 pm

I think we tend to think mates are, in some way, below our standard of play! I mated someone over the summer in a N+3P v B+2P, after he'd set up a very good blockade with his king. He looked absolutely horrified when Nc5+ mated his king on a4.

I missed a mate in 1, Qh7 (or g7)last year- near the time control, but not in chronic time trouble. Fortunately so did my oppo and so I played it next move. It still had to be pointed out to me that this mate was on the previous move!
Point of interest- if the person was "that type of chap" and had sealed his mate, would he (I assume that the non-sealer keeps the envelope)actually need to turn up at the resumption
Andrew

That type of chap would turn up to the resumption a minute before his flag was due to fall, one suspects.

As it happens I didn't spot the mate straight away.

I wanted to play Ne6 to allow Qg7 mate and when I realised that would allow Black to win the Queen I then had a quick look at QxQ then Ne6 before I realised (without thinking about it) that just Qf8 straightaway was mate.

I suppose it's easy to miss mates if your not looking for them (e.g. not in an attacking frame of mind). At the end of a time control you might want to sit back, have a rest and take stock of the position. Justin's 'How did the game gos' are usually more strategical in nature - if this position had been amongst a set of tactical puzzles you might have seen it straight away Jonathan.