My recent blog article on the memory test channel 5 gave Susan Polgar in ‘My Brilliant Brain’ stirred a memory of my own.

I dug out one of my old undergraduate text books (‘Psychology’ by Gleitman – Norton 1986) and began flicking through it. Sure enough there was a short section regarding the study of chess and how that contributed to the understanding of thinking processes.


“De Groot, himself a chess master, posed various chess problems to [ players of varying standards] (including two former world champions) and asked them to select the best move. Contrary to what might have been expected, the grandmasters and masters did not look further ahead. They considered about the same number of moves and calculated about as far into the future as the lower-ranked players. Their superiority was not in quantity, but in quality. All of them chose continuations that would have won the game, while few of the other players did.”

An interesting finding I think.

The book then goes on to discuss the key idea of the Polgar programme – that chess positions are memorised in blocks rather than as individual pieces.

“Players of different [abilities] were shown various chess positions for five seconds each and were then asked to reproduce them a few minutes later. Grandmasters and masters did so with hardly an error; lesser players (including mere experts) performed much more poorly … This is not because the chess masters have “better visual memory”. When presented with bizarre positions that would hardly ever arise in the course of a well-played game, they recalled no better than voices. Their superiority is in the conceptual organization of chess, not in the memory for visual patterns as such.”


Here Gleitman does give us a diagram of one of the positions used, which enables us to re-create the experiment here.

Scroll down until you see the chess position, look at it for five seconds then scroll down again until you reach the text that follows:- 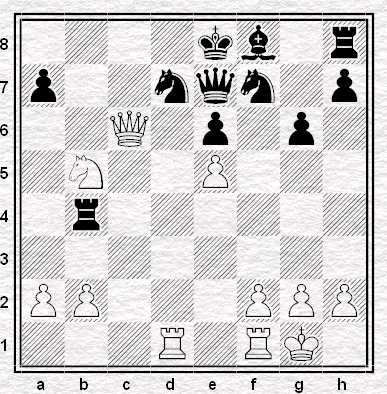 OK, now you have to wait for a few minutes so go off and make yourself a cup of tea or distract yourself for a moment. You may well want to spend the time going off to get a chess set or at least a pen and paper so you can scribble down your answer to the question that's coming.

While we’re waiting I shall take the opportunity to tell you I’m writing this at Nouveaute, my current favourite coffee shop. It’s upstairs at the Habitat in Regent Street and does a very good blueberry muffin. Failing that I’d recommend a slice of their chocolate brownie. Happily Nouveaute is very convenient to reach from Streatham – the 159 bus runs straight there from the High Road and even stops almost right outside Habitat.

Anyhoo, are you back now?

So, your task is simple. Just try to reconstruct the chess position you saw above then compare your answer with the actual game.


How did you get on?

Hmm... I was too focussed on trying to memorise what was where rather than on considering the position as a chess position (and memorising it indirectly).

I'm now wondering what patterns there are to recognise? White has a standard short-castled set-up (Kg1, Rf1, pawns on f2, g2 and h)... but what else?... Maybe I should abandon trying to register piece configurations and assess the position. White has two pawns for two pieces; the Black king is blocked in by his pieces and has one escape square; he is also two moves away from castling; White has Queen, Rook and Knight poised to strike (and it looks like the striking needs to be done quickly otherwise Black will castle to safety)... Who's to move? Presumably White... Is there a mate? I can't see one although there is at least Nc7+ followed by Nxe6+ and then back to c7+...

Am I getting anywhere? Do I have enough information to enable me to reconstruct the position? No! (I'm afraid I'm confused.)

Another interesting finding is that when there is one move far better than the others, a 'critical moment' move, GMs tend to consistently find it, weaker players don't.