Is this the third most drawish variation in the world? 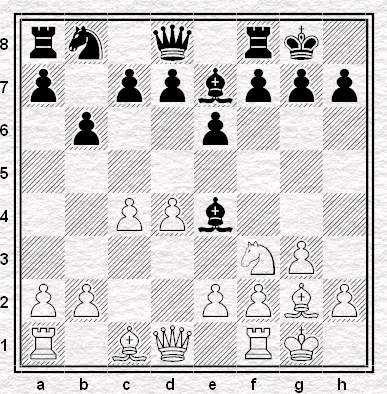 I was alerted to the potential of this variation when looking for something negative to play in next season's Aragón Championships, in which, as the minimum entry requirement is an Elo of 2100, I am liable to find myself seriously outgunned.

It's not the first time I've taken an interest in the Queen's Indian, though previously I've been more attracted to the lines involving 4...Ba6: but they appear to be a bit too lively for my present purposes. It was with no small pleasure, then, that reading Yrjölä and Tella's Queen's Indian (Gambit, 2003) I came across the following comment:

8. Nxe4 Bxe4 is a totally drawing variation. There are more than a thousand games with this move [sic] in our database but during the last ten years there have only been a few games that have lasted more than 15 moves.

There is nothing White can do to change the drawing nature of this line.

This is what we want! So let's look at the stats.

Using our usual criteria and searching Chessbase Online Database for games between opponents rated 2400 and above, we find 73 games, of which 68 were drawn, the remaining five being split with three wins for Black and only two for White. This is a draw percentage of 93.15, only marginally behind the 93.28 achieved in the Cozio variation of the Petroff. Winners with Black include Colin Crouch, Keith Arkell failing where Tom Chivers succeeded: those drawing with White include not only Ivan Farago - six times, plus another one on the Black side - but Bellón, who obviously isn't too proud to have a nine-move draw with the White pieces provided the opponent (Evgeny Ermenkov) is the one to make the offer.

Oddly, the search results only include games going back to 1998. It's possible that Elo grades weren't available - or just weren't entered - for games before this date, as I imagine that (to take one example of many) both Lajos Portisch and Anatoly Karpov were some distance above that figure when they treated themnselves to a seventeen-move draw at Skara in 1980. (They'd managed twenty-five in Tilburg earlier the same year, perhaps the more aggressive positioning of the rook on f1 having encouraged White to continue.)

Not bad seeing as the queens are still on the board and there's no open files. Still, 8.Nxe4 isn't compulsory - Black also has to be aware of 8.Qc2 and 8.Bd2. I notice that discussing the former move, the authors give three games in the same variation played between Andersson and Karpov in 1983 and 1984. They were drawn in 21, 25 and 17 moves respectively.
Posted by ejh at 10:10 am

Good luck for the tournament. I wonder if you'll get to play this line?

Try playing the position against Fritz with either colour. Bet it would win as always (not putting down your chess ability-reckon it would beat any non titled player). May be useful in appreciating possibilities in seemingly dead positions.
Andrew

"thereis nothing white can do to chae the drawing nature of this line" is a rather stupid comment, unless it is presented to him/her in a theme event. It is white who has chosen this line, by not playing 3.Nc3, 4.a3, 7.d5, or as you point out 8.Qc2 or Bd2. Hence the question should be whether Black can do anything to change the situation - since drawish lines are usually whipped out by weak white players against stronger black ones.

Elaborating, and not wanting to quibble with your statistical based approach, I think a distinction should be drawn between variations where Black's choice of opening indicates he/she is probably happy with a draw anyway, and white just hurries the process along, and variations where all the indications are that Black is up for a fight only for BANG! White to attempt to virtually claim a draw.

"The most drawish line" probably falls into the latter category, the second and third into the former. The statistics of the former are also probably more likely to be "corrupted" by a higher number of pre-arranged draws.

Apparently John Nunn played that against Jonathan Parker when Black needed to win for his final GM norm.

I mostly agree with your categorisation although of course, in each instance, however much Black is "up for a fight" he or she will surely be aware that a virtual forced draw is available if White wants it.

The stats, by the way, give four black wins and twenty-nine draws from thirty-three games (just shy of 88%, I should think). Malaniuk has managed to win the position twice.

Well, not really: the position is not an obvious draw and it may well be that the authors (for whom English is not their first language) are expressing the idea that nevertheless, no matter how much White has explored the postion, nothing has been found to liven it up.

Maybe i've misunderstood - I got the impression that the comment was directed specifically at the line 8. Nxe4 Bxe4, rather than 4... Bb7 as a whole. And as a player of these positions as white i would take a black player playing 4...Bb7 over one playing 4... Ba6 any day of the week. I haven't studied it too closely, but on the evidence of the spate of recent top level games in the line 4... Ba6 seems to have forced draw lines all over the place.

BTW are your statistics right? I assume that you're just counting up the number of wins and making the balance drawn. Which is a problem when i go to Chessbase Online because it seems to record the total number of games played ie. 73, but only actually list 58 of them (ie. those since 1998). I think.

I got the impression that the comment was directed specifically at the line 8. Nxe4 Bxe4, rather than 4... Bb7 as a whole.

Yes it is, not sure I see your point!

I haven't studied it too closely, but on the evidence of the spate of recent top level games in the line 4... Ba6 seems to have forced draw lines all over the place

There do seem to be forced draws, but only down the line - there are alternatives on (for instance) move 12 and earlier that Black had play for a win.

I didn't count up the games - it would be odd if they didn't display all the games they find. It might well screw up the stats though - not that this is a scientific survey....

On the subject of which, the chessgames.com World team just defeated GM Yuri Shulman in a correspondence game as black with 12...f5:

I played that in a correspondence game last year and got pasted.

I also lost a piece of my magnetic set analysing it at a campsite.