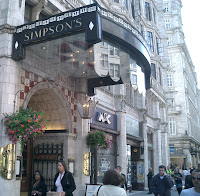 The historic chess venue Simpson's-in-the-Strand is currently hosting the Staunton Memorial chess tournament. For those outside of London or unable to make it into the centre, I thought I'd post up some photographs of the venue and from the event. This post is of Simpson's in general; I will provide photographs of the players later on in the week. One last thing before I get going: The photos here are mostly fairly small - but if you click on any individual photograph, you will be able to see the image at its original large size, where you should be able to make out many of the details. 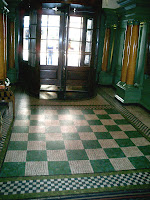 First off, above is the famous entrance on the Strand. Just around the corner is The Savoy, as well as The Savoy Theatre where Kasparov demolished English World Championship hope Nigel Short in 1993. Sixteen at the time and still living with my parents in Portsmouth, I was able to visit one afternoon thanks to a friend from my local club who had a spare ticket. I also dared to sneak into Simpson's for a second or two, and glimpsed in the lobby a famous old board, played on by many of the old greats. More on that later - but at the time I missed the fact the entrance has a chess position on it. The lobby floor is a chess board too.

A little further in is this display case, full of chess and Staunton-related memorabilia, old and new: 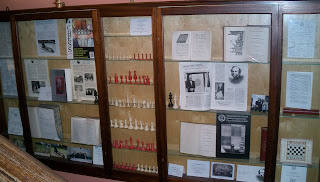 Now, you have a choice of two lefts at this display. Left and up the stairs leads to the tournament playing hall. But what's round the corner by the display case itself? 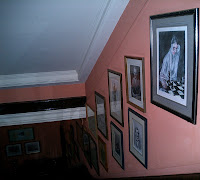 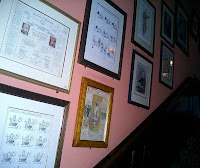 At the bottom is some kind of function room. It, too, is not without its chess content. Here is a photograph of one wall, which includes a similar board to that in the lobby: 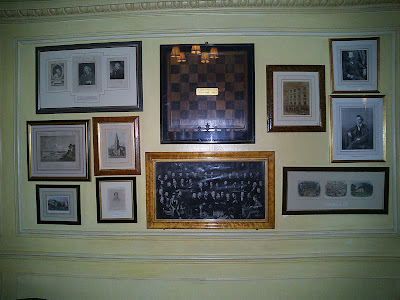 And who played on that board? Let's take a closer look: 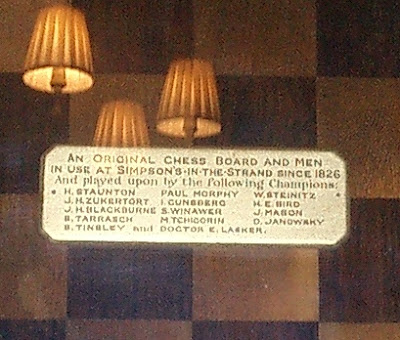 The names start with those of Howard Staunton, Paul Morphy, and Wilhelm Steinitz. The final one is that of Doctor Emanuel Lasker. Chess is blessed with such vivid ghosts; moves made hundreds of years ago still gleam and shine like new gems. But here the ghosts are that bit closer. Their fingers moved those pieces.

But upstairs, the venue is getting ready for its modern games: 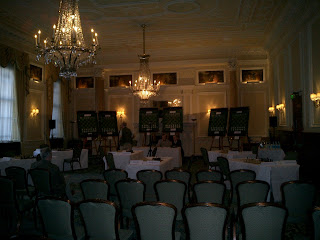 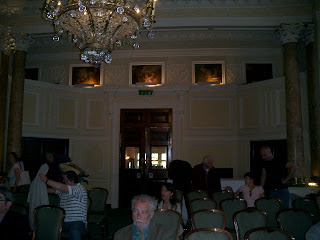 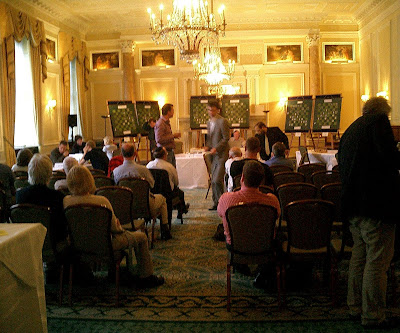 ... but that's it for now. More photographs including those of the players in a post later on.

Unfortunately my photographs of the board in the lobby did not come out; neither did my photos of the Knight's Bar in Simpson's, where players analyse after their games - and where there is a video feed, a few boards, and commentary provided for spectators. I will try to get some more photographs later in the week. (In fact I will be visiting this remarkable chess venue again on Thursday evening, so anyone around for a drink after should let me know.)
Posted by Tom Chivers at 1:34 pm

I had a day off today and I was in town anyway so I trundled along to Simpsons to see what was happening.

Alas it was the Rest Day!

I sauntered along at lunch time too, and blundered right into the Literary Luncheon of the Oldie Society, or something.

I cant get to email just now but I'm not going to be able to get to Simpsons tonight.