You've seen Simpson's-in-the-Strand, the venue this year for the whole of the Staunton Memorial tournament. Now take a look at the competitors. Funny how all the photographers flock to Jovanka Houska, the only lady player in the event:

But newly-married Michael Adams, stood to the right hand side by the wall, seems more interested in the newspaper's crossword. (Six down is ravioli, Jon Speelman announced to Bob Wade moments earlier when entering the venue.)

I guess her popularity must be thanks to photographs that come out like this one: 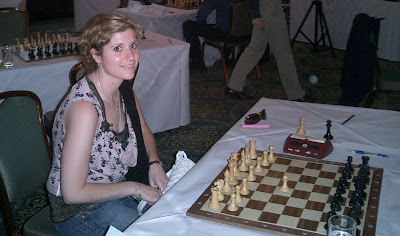 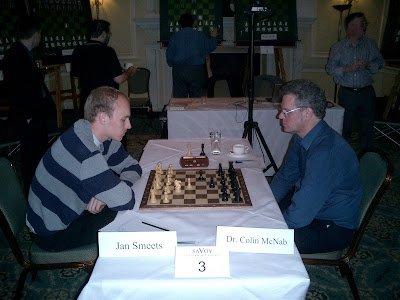 The Sicilian evidently came as a surprise to white - no Pirc, no Modern, from one of its contemporary experts? - and cost him a lot of time on the clock. Then McNab tried a dubious-looking 'unprotected fianchetto' with Be7-f6, and white's initiative won through later in mutual time-trouble.

No smiles either for the photographers from Jan Werle or Loek van Wely: 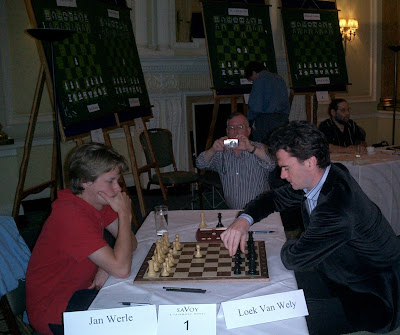 If that picture seems familiar, this photograph from the official site might explain why. 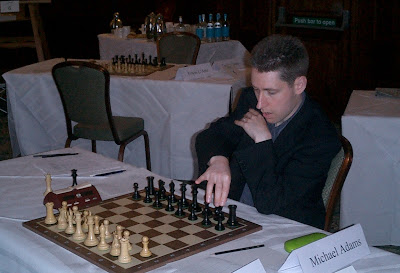 I wouldn't fancy my chances with white. But Peter Wells seems to move order him, as here... 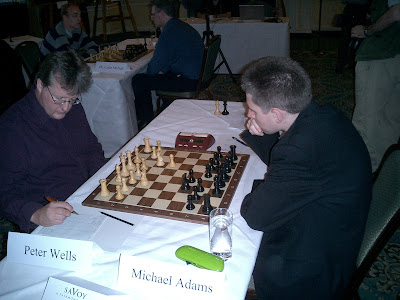 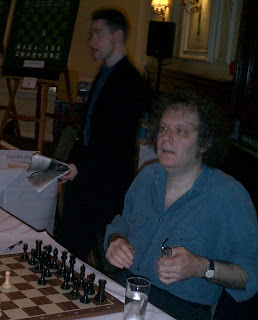 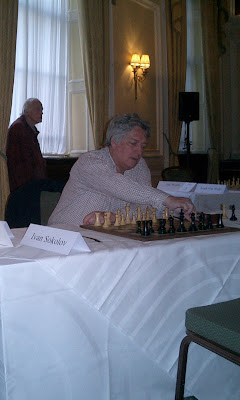 Behind Timman stands Bob Wade: he was a young gun too, once upon a time. But he will still wave his stick at photographers who get too close.

(Incidentally, if you would like to see any of these photos in more details - just click them, and the larger, original versions will open. You might ask yourself, for instance, if Adams is doing a crocodile impression with his newspaper, in the photograph to the right behind the seated Speelman.)

And.... that's it for now. You can find all the results, games and standings here. I'll be back on Thursday to try to snap those players too late or too far away to come out properly, and also a few of us from the club will be going out for drinks after; all are welcome, however.
Posted by Tom Chivers at 1:34 pm

With all due respect, Jovanka Houska looks pretty yummie. I can't help being a guy. If you're reading this, i've got you're Caro-Kann book. That's gotta make up for it, right?

Talking of Caro-Kann books, I've got that one Speelman wrote years ago - though not because I fancy him ;-)

Look how in need of adjustment her pieces are, however. Her knights are almost pointing backwards.

On the important question of piece deportment: In which direction should a knight's nozzle point? Usually I have mine sideways on, facing inward (read into that what you like), but I know others prefer them looking forward... At times, I've been tempted to have them staring directly at the enemy king, making adjustments as necessary during the game.

Sideways for a gentleman, surely?

At Ghent I played an FM who pointed his N's backwards. I snapped one off on move 3 but the other beast stayed on the board the whole game. Can't believe he actually likes the N's facing that way but reckons it might wind the opponent up. That is sort of the same line of thinking (albeit negative rather than positive way) that could apply to tennis. Some people could refuse to knock up before a match on the grounds that it will help the opponent as much as them (and indeed could wind them up. Never seems to happen though.
Andrew

Head first and forwards for me. Backwards is for freaks!

I've got a book of Speelman coming my way. His best games.

Knights - straight forward. Anything else is an abomination.

If there was any justice in the world there would be another inquisition to get rid of the heretics who do weird things with their knights.