The Pleasure and Pain of Chess Spectatorship

One of the sometimes great and sometimes gory things about watching Master chess games live - and in the flesh, and without silicon assistance - is pitting your wits against the players sat directly in front of you. Great, because occasionally you'll spot an idea before they do. Gory, because sometimes the 'improvement' you come up with and check up on after is, in reality, a '??'.

This year at the Staunton Memorial, which finished on Saturday and which was won convincingly by Michael Adams, I only knew the pain of chess spectatorship, with most of my flashy moves making Fritz spike its evaluation in the opposite direction to that which I hoped. Others had more luck, however, such as Brian Somebodyorother whom I chatted to in the bar one time after the games. He showed me the draw he'd spotted that Jovanka Houska had missed in this position against Jan Werle, where it's white to play: 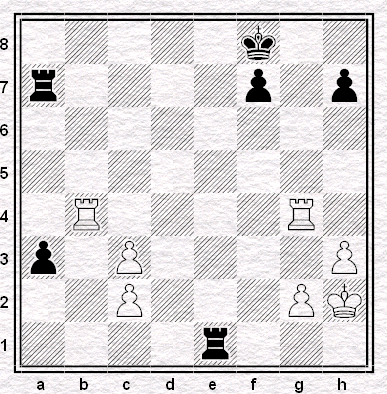 True, there might be improvements amongst that sequence - but in the diagram she missed a clear draw, the one which Brian in the audience had spotted. Can you find it too? I certainly couldn't.

Got it after a few minutes (no idea if it was 5 or 15). However I was slightly aided by your wording. Also Jovanka seemed to be in time trouble in most of her games and I doubt whether she had the luxury of a few minutes to think.
Andrew

This is very interesting, indeed. I would still play 34. Ra4 and respond to 34...Ree7 with 35.Rge4. The exchanges between rooks will result in the A pawn dropping, and an easy draw since black has to spend time working on white's doubled pawns.

Mm, I'm not convinced by your line chessbuff after 35... a2. I can't see how the promotion threat is stopped?

Tom, a2 would be the straw that broke the camel's back. Let's just pretend that the A pawn does not exist! I am still working on the problem, refusing to visit the House of Fritz.