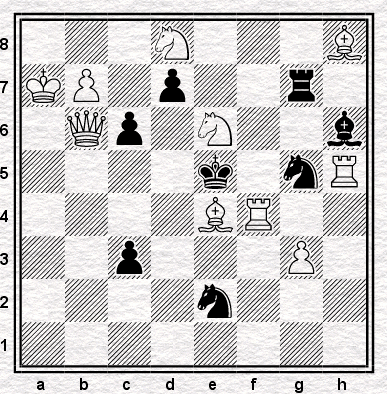 White to play and mate in two

I don't know how good Nabokov's puzzle is, by the standards of problems: I'm not a problemist, never been a composer nor a solver. No evaluation I make would be much use to anyone, as it would consist of no more than my personal opinion, not an opinion which would be informed or carry any weight. (In this instance I can't even say whether or not I found it hard, easy or even enjoyable to try and solve, since I knew the solution before locating the problem.)

It's a problem - how to evaluate a work when you don't have the particular experience to understand something important about it?

Nabokov would have known how good his puzzle was, though, since he knew problems. According to an article in the journal Yale French Studies:

When asked why he published his chess compositions together with his poems in Poems and Problems (1970) Nabokov remarks that chess problems are "the poetry of chess. They demand from the composer the same virtues that characterize all worthwhile art: originality, invention, harmony, conciseness, complexity and splendid insincerity."

This is problematic when it comes to writing about the figure you admire, since you will inevitably have to explain what it was they worked on, and your explanation may expose the limitation of your understanding. Take, for instance, the passage from Chabon's novel, which was reproduced in Thirlwell's review and which describes the position above:

a messy-looking middle game with Black's king under attack at the centre of the board and White having the advantage of a couple of pieces.

But that's quite wrong, isn't it? It's not the sort of position which resembles a game at all. It's not just "messy-looking", it's obviously - to a chessplayer - not a game at all, and if it were, White wouldn't just have "the advanatage of a couple of pieces", he would be winning without difficulty whether or not he found a mate in two. The description grates: it's not just inexpert, it's the description of somebody who doesn't know chess (or not beyond beginnerhood) phrased as if it were a knowledgable commentary by somebody who does.

Now here, I too have the same problem: my knowledge comes at secondhand. I have not read the novel and therefore I can't be sure whose voice this is. Is it the authorial voice, or the voice of a character? If a character - possibly Landsman, Chabon's detective - then there may be nothing at all wrong. He may be seeing the position precisely as a near-beginner might see it, a mess in which the advantage to one side of a couple of pieces, even though one be a queen, might well mean very little. Conversely, it may be the authorial voice, but one deliberately naive, one inviting the viewer to see the position just as the viewer might, with little or no knowledge of the game.

But there is a third possibility, that Chabon is describing the position from what is meant to be a position of knowledge, either on his part or on the part of his character. I would hope not, because if that's the case then it matters that the description is a poor one. The pretension to knowledge would be false. The invitation to the reader, to see the position from within the mind of a chessplayer, would be a false one too.

I shall have to read it to find out, or ask someone who has. (For all I know, there is a diagram in the book, though that would not of course mean the description were any more valid.) Perhaps I shall, one day. I'd find out, too, if Chabon makes it clear why Shpilman calls himself Emanuel Lasker.

For as I said yesterday, Thirlwell's review does not: and it's hard to know if he does understand why. I can guess why, even without more knowledge of the book than his review has given me, simply because I know somethingof the subject by which Nabokov was fascinated. And as I know and you know, as Nabokov would have known, but as, possibly, Thirlwell does not, Emanuel Lasker was not only a great Jewish chessplayer and a world champion, but he was a refugee from the Nazis.


[* = a possible exception is this piece, discussing Nabokov's problem, which either gives an insight into Nabokov's thinking - and his genius - which is extraordinary, or makes some equally extraordinary claims without too much to back them up.]
Posted by ejh at 8:00 pm

I suspect I prefer Nabokov's books to his chess puzzles.

The quote in its context can be found through the 'Search Inside' facility available
here (see near the top of page 4). There are further chess references too though not an explanation of why the murder victim called himself Emanuel Lasker.

I enjoyed Nabokov's problem. I wanted 1 b8=N to be the answer as the mates which followed 1... d6 and 1... d5 (both check blocks which gave checkmate) were appealing. Still, there was logic to be followed to get to the solution.

About the piece which was linked to in the footnote: I didn't care for the symbolism which was read into the solution and its deduction.

I wonder what Tim Krabbé – a problemist and novelist who has an interest in Nabokov - would make of all this.

The symbolism - either they had some good reason to think that Nabokov had it in mind or they were trying too hard!

I'd like to read the book and then return to the question. Unfortunately it's eighteen quid and although I can buy books at trade prices it's still more than I'm going to shell out....