Belated congratulations - since the present writer has been away - to Jacob Aagaard for winning the British Championship. He held on to the title he appeared to have wrapped up early with a string of wins in the first week, despite twice trying to throw it away by losing crucial games with the White pieces in the second.

Double congratulations, too: since during the course of that first week his grading apparently touched the magic figure of 2500 which entitles him to claim the grandmaster title. He's been waiting for a long time. When I played him at Oban nearly three years ago he told me he had already achieved the required norms! But at the time his grading was only 2431, too low by a considerable distance. It has taken him a lot of time and work to make up the gap.

The game itself can be played through below. Until I put it through the computer last night I never realised how close I came to beating an IM and future British Champion. After solid defence from Black, White sacrificed unsoundly and the game was in my hands: it took a pair of blunders to throw it away. Noticing that the second and worse of these was on move 40, you'd probably assume that the mistakes were made in time trouble. But in fact the time control was on move 36 (the diagram position is after Black's 36th move) and I made it with plenty of time to spare. 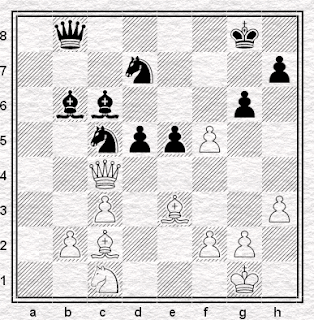 Appalling, that Black could lose a position like that (let alone the even better position that he achieved a couple of moves later). Desperate, that he should do so against a titled player.

Afterwards Aagaard (who in the postmortem attributed my loss to "panic") was relieved. I was disappointed rather than devastated. Probably because I didn't have a computer to show me just how good my position had been. Looking at it now, I can't believe it. I can't believe it even though I do it so often.