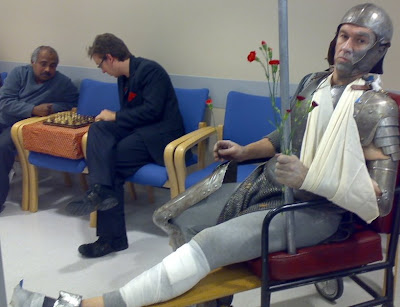 You might recall that back in November, St George's Hospital, Tooting, witnessed a rather unusual chess event: a theatre production called The Chess Players performed over three days, whilst patients, staff and visitors played friendly games with members of Streatham and Brixton Chess Club and Streatham Library Chess Club. We previewed the event here and then reported it after.

The creative force behind that successful event was writer Sarah Weatherall of theatre-group Lightning Ensemble, and now she's planning to return to the hospital with an even more ambitious chess-based project: a week-long event running from April 21st to May 2nd which will include at least one session at a second site in Wimbledon, actors performing in public areas and the wards, all with a therapeutic ethos whereby chess is used to enable staff and medical students to relate to patients in different ways.

And once again, the hospital staff, patients, and visitors will be invited to play chess games against members of our and Streatham Library's Chess Club. Which is where you come in! Each afternoon will feature a chess session of around three to four hours, and at the end of the event there'll be a match between ourselves and a newly-created hospital team. So if you have a couple of hours or more to spare, do take part. You can volunteer or find out more information by contacting Stan Rodriguez, whilst the Lightning Ensemble website is here.
Posted by Tom Chivers at 11:11 am