From the Opening Into the Endgame 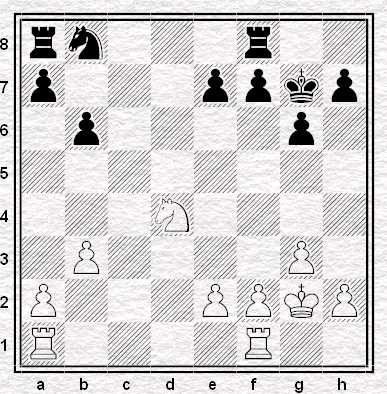 I was drafted into the Croydon League to play at Coulsdon on Wednesday. It was, shall we say, not a successful journey.

After a comprehensive gubbing at the hands of former S&BCCer Kevin Bailey I was nosing through their collection of second hand books when I noticed they had a copy of Edmar Mednis' From the Opening Into the Endgame available for sale.

That's worth a pound of anybody's money I thought. As it turned out I didn't actually have any change on me (students eh?) so it was a quid borrowed from Martin Smith that I gave them for the book.

One of the reasons I wanted to get the book is the chapter based around the position at the top of today's blog. It has always greatly amused me. Precisely symmetrical other than the position of the Knights. Can White really convert a two tempo advantage (one of which Black will automatically get back seeing as it's his move) into a win?

Well it turns out he can - if White is Smyslov or Andersson that is.

This, it seems to me, is an example of how chess is such an impossibly difficult game. The price of nearly equalizing (almost literally in this case), but not quite, can be an eternity of defending a worse position without a hint of counterplay.

Mind you Chessbase Online Database doesn't seem to record any games in which Ulf Andersson has played that line, though he has tried the same thing but with 5.e3 three times (and drawn them all).

Of course when I played him I got smart and kept the queens on...

The respective positions of the Knights are fairly important when they're one of only three pieces left though...

Can White really convert a two tempo advantage (one of which Black will automatically get back seeing as it's his move) into a win?

Put it this way. If White received the first two moves in the opening, symmetrical position - would you be surprised if his or her advantage was a considerable one?

(If you would be, I'll give you a game under those conditions...)