What's in a name?

Today we're due an update as to S&BCC's recent fortunes in the Surrey and Croydon Leagues. However, since Tom is currently walking up hill and down dale I've been left minding the shop so we'll put League news on hold for a day or two (sneak preview: we'll be glossing over the Croydon League I's recent trip to Coulsdon).

So what to fill the gap until TC gets his yomping boots off?

It occurs to me that the S&BCC Blog likes nothing more than a pedantic discussion on the definition of some chess term or other. Well my little corner of it doesn't, and judging by the disapproval my use of the term zwischenzug attracted, I am not alone. We might also recall Justin's more scholarly look at Zugwang back in November.

In this spirit, then, who's up for a pointless investigation into what a combination actually is?

Thumbing through an old Batsford book just before Christmas (Yakov Neishtadt's "Test Your Tactical Ability"), I found the following listed as

"... the essential features of a combination:
1. Coordinated action of two or more pieces.
2. Forced aspect of the variation.
3. Presence of a sacrifice.
4. Positive aim of the operation."


It seems CJS Purdy shares my doubts and has argued strongly that there's absolutely no reason that a combination has to involve the shedding of material . Edward Winter, in his wonderful book Kings, Commoners and Knaves, quotes Purdy's opinion then follows up with a couple of pages of debate on the question. My favourite argument against Purdy, from one Antonio Gude, is that the example given was not a sacrifice but a "logical tactical sequence". What's the difference I wonder.

Surely, though, a combination is merely the linking together of two or more tactical themes into a single operation? Nothing more, nothing less.

Here's an example from one of my own games to prove the point ... 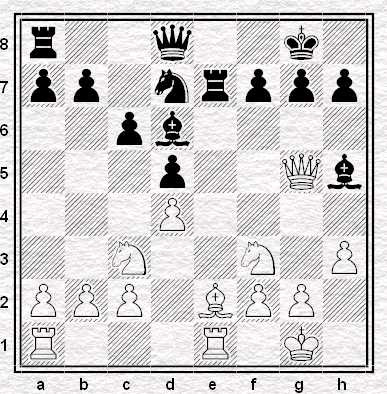 A combination wouldn't you say? A simple, even trivial one no doubt but a combination nevertheless.
Posted by Jonathan B at 2:02 am

I don't think it's a combination, because of the blunder. Or not starting with 1...Bxf3, anyway, is which a move designed to weaken White's kingside.

But I suppose one could argue that after the blunder, you do have a combination, that there is a forced sequence revealing a tactical point. Maybe.

Another thing - do people actually use the term any more?

which term? Combination or blunder?

I would say 1. ... Bxf3 is included in the combination because I played it with the knowledge that I might end up winning the queen. I saw, of course, that White could and should play 2. ... gxf3 which, as you say, merely weakens the queenside but I still had the other outcome in mind.

What say you to the idea of a sacrifice being necessary Justin?

‘The combination. The attempt to find a definition of this term which is accurate and acceptable to all has been [made] many times. The best-known definition was formulated by Botvinnik: “A combination is a forcing variation with a sacrifice, leading to the advantage of the perpetrator.”’

‘This seems to me an entirely satisfactory definition... However, Botvinnik’s definition has been criticised... The critics have mainly focused on the fact one can sometimes have a combination which does not involve a sacrifice...’

‘One attempt to improve the definition is offered in … The Chess Dictionary [referred to earlier in the text as having been published in Moscow in 1990]: “A combination is a forced variation which utilises various tactical devices; the sacrifice is an element which is usually present.” In essence, this definition is not far removed from Botvinnik’s, except that it includes reference to tactical devices, and does not absolutely require the presence of a sacrifice.’

‘This is already very close to my own view of the matter, but it seems to me that it too is capable of some small improvement. I therefore offer the reader my own definition, based on the conclusions [previously] drawn ...: a combination is a system of tactical blows and their interconnections, having a forced character, and leading to favourable consequences for the perpetrator.’

‘It is a system, because in a combination, often an initial tactical blow and its immediate consequences are frequently followed, after a few moves, by another tactical blow, and so on. The forcing nature of a combination is an important element, while the interconnections provide for a series of moves, not themselves containing a revolutionary element. A combination aims to bring an advantage to its perpetrator, which largely agrees with Botvinnik’s definition.’

Broadly I agree with Beim’s definition though I think it could be expressed more succinctly! (Perhaps it lost something in translation.) I agree that a combination needn’t contain a sacrifice; it could be based around a tactical blow of another sort – for example, a discovered attack like Jonathan’s. It could also involve multiple tactical blows. And I believe it can be bad or unsound, as Beim later acknowledges in his text. So, here’s my attempt at a definition: ‘a forcing sequence containing one or more tactical blows which aim to bring about a favourable outcome for the perpetrator.’

I'd say no need for a sacrifice, but it does need to be a forcing line and best play needs to involve a tactial theme (which is why I don't count your bishop move).

I would dispute that a combination has to end to the advantage of its perpetrator.

Maybe more accurate would be to say that it resolves certain features of a position in the perpetrator's favour, even if the net result is not ultimately to their advantage.

Great contribution Angus - I like your definition very much.


Justin, the reason why I still think of this as a combination is because in my head I saw it as a combination. Indeed given the play of the game to that point I actually expected it to finish this way.

If it's not forced then I think of it as a trap (i.e. not a forced advantage, but enticing the opponent into a mistake). On the other hand, a combination doesn't need to involve sacrifice of material in my view.

In that sense I probably don't play many genuine combinations according to my own definition - just a succession of vague moves until a point when a forcing sequence can be set up.

Perhaps a good test of whether these terms are well-defined or not, is whether you can programme a computer to recognize them?