"A dour battle" was how Captain Richard Tillett summed up my recent victory with the black pieces over Dulwich's Allen Miller in the Croydon & District Chess League Division 2. And indeed, I can't deny it: a long manouvering middlegame, a slight advantage, a simplified position with some pressure, a tight bishop and pawn endgame - that I scraped through to claim the whole point.

Still, even the greyest of chess skies can be pierced now and again by a spectacular dart of starlight, and analyzing the game after my computer found that both my opponent and I had overlooked a remarkable possibility, which is the basis of today's puzzle: 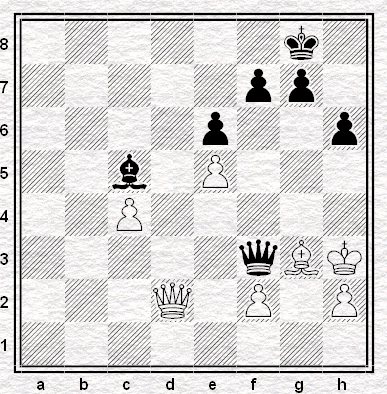 In this position from the game it's black to play. The wayward position of the white monarch might be exploited immediately with 49...Qf5+, for after 50.Kg2 Qe4+ black picks up the c4 pawn - although one would think white would retain reasonable chances of a draw. The same is also probably true of the endgame arising after 49...h5 if the game continues, say, 50.Qf4 Qxf4 51.Bxf4 Bxf2. Alternatively, black can consider the more ambitious 49... g5 with the immediate threat of 50... g4+ and a mating attack.

So, today's chess puzzle is to work out which of these moves should not have been played - and how I should have been punished after I did, in fact, make the wrong move...
Posted by Tom Chivers at 9:46 am