I've gone twelve correspondence games unbeaten. The last of these to finish was a game concluded just this week in which I was representing Surrey against Hertfordshire. Or, in individual terms, playing against the amiable Hertfordshire FIDE Master Lorin D'Costa. Who, I believe, went to the same school as I did, albeit twenty years later - though he probably doesn't cite that as his claim to fame. Not when you have Lewis Hamilton as a contemporary. Mostly.

Still, I'm not sure correspondence chess is as much fun as it used to be before we all had computers. Back in the good old days you could play all sorts of dicky gambits and get away with it through the stupidity of the opponent. My opponents could, anyway. A dozen games unbeaten? It used to be a miracle if I could get through a dozen moves unbeaten. Just the other day I came across a 2001 game Haug-Horton in which my artificial aids were limited to a chess set on the floor of a shared house in Heaton. By the time I'd noticed that 7...Qa5 wasn't clever after all, it was basically over. 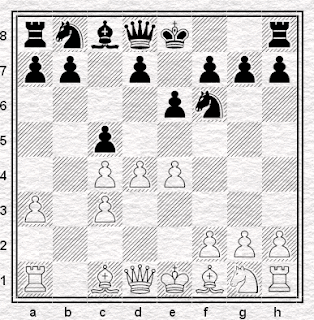 Whether that's better or worse than playing a game that lasts for months or years and losing at the end - I don't know. Probably better. But you wouldn't have the same feeling of stupidity.

I had a thirteen game unbeaten run OTB toward the end of last season - including twelve draws!