Last week I watched one of the most dramatic and traumatic football matches I have seen in years, a UEFA Cup quarter-final, second leg, between Getafe and Bayern Munich. Bayern are, of course, world famous and multiple European champions: Getafe are a small town south of Madrid. If you've never heard of them, that's forgiveable - less forgiveable to actually say so just before playing them, as Franz Beckenbauer did, making it a grudge match when there had been no grudge before.

The first leg was thrilling enough, with Getafe equalising at the death to make themselves favourites to go through: but they ceased to be favourites a few minutes into the second leg when they had a man sent off for a professional foul. Shortly afterwards, their striker, Uche, was taken off injured, and it looked like a long defensive struggle to try and hold Bayern 0-0 and go through on away goals. But shortly before half-time (the highlights are here) Contra, against the run of play, stumbled through half the Bayern team before rocketing past Kahn to put Getafe ahead. They looked like they'd won it for sure when their man rounded Kahn deep into the second half - only to fall over with an open goal in front of him. A minute before full-time Ribery, last seen scoring a penalty for France to beat England, volleyed an equaliser and that looked like the end for Getafe, with their exhausted ten men facing extra-time.

But no sooner had the half-hour begun when they scored, again from distance - and added to it a couple of minutes later. Three-one and Bayern seemed to have nothing left, though some of us were thinking back to 1982 and a German comeback from 3-1 down in extra-time. Bayern, however, offered no threat until, with five minutes to go, the Getafe keeper, Pato (which means duck) who had already made a grotesque error in the first leg, unaccountably dropped a harmless long ball and Toni rushed in to score. Everybody was stunned: even the TV, which never got round to showing an action replay until the news the following morning.

But even now, Getafe were ahead, and time was almost up. Kahn was forced to rush forward to join his teammates around to the Getafe area. A long ball was headed away and had it fallen to a Getafe player, that would have been the end: but with Kahn stranded, Bayern recovered the ball, a cross came in, Toni got his head to it, the ball bounced beyond Pato - and Getafe, having been ahead practically all the match, having played way above themselves, having had the match in their hands, had thrown it away, and with it, a chance they may never get again.

the author, on Saturday evening
Anyway, the chess. It's Saturday afternoon, the last round of the Aragón Team Championship and Casino Jaque of Huesca are playing in Zaragoza against the ONCE Aragón side. I am Black on top board against Luis Laliena Solanes (FIDE 2166) and the situation is this. If we win the match, we evade the relegation play-offs. If we draw or lose, we do not, although drawing should get us a slightly better seeding than losing would. Two games of the four have finished: we have lost on board two and drawn on board three. I think we may be winning on board four but I am short of time and cannot get up and look. Either way it is probable that I need to win.

However, I have played, so far, quite splendidly, outplaying my opponent on the queenside, though as usual I have used up too much time in doing so. Meanwhile, in bringing his f3 knight over for support, he's left his king short of defenders. But his last move, 23.Nd4-c6, forks my queen and rook. 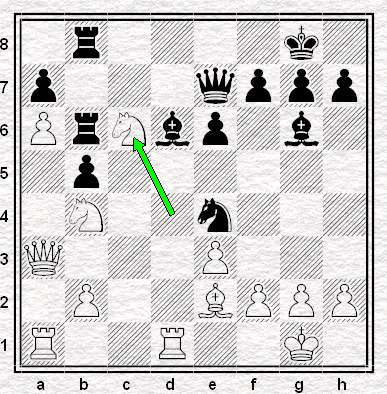 I knew I had at least a draw here, with 23...Bxh2+, but I didn't think I could take the draw, with the match situation and the league situation as they were. I had seen the game continuation already, but although I thought it ought to give me a technically winning game I was far from sure that it was the best course in practice, and so I looked for more with 23...Qh4 with the idea of 24.g3 Nxg3 25.hxg3 Bxg3 26.fxg3 Qxg3+ 27.Kf1 Be4! winning. Unfortunately there was a hitch, which is that White has the zwischenzug 26.Ne7+! when after 26...Kf8 27.Nxg6+ there is no bishop left to finish off the combination.

So, with about a minute left on my Fischer clock, I played 23...Rxc6 24.Nxc6 Bxa3 25.Nxe7+ Bxe7 which gained me two pieces for a rook and which may be winning, and may not. But with a rook on the seventh after 26.Rd7, the back rank weak, the b5 pawn likely to fall and themes of Rb7xb6 if the bishop settles on that square, it's far from ideal with only a couple of minutes on the clock and never mind the extra thirty seconds a move. Sure enough, after 26...Bc5 27.Rc1 h6 28.Rb7 I played the blunder 28...Rc8??? and that was it. I was lost, so was the match, and so was our chance of escaping the relegation play-offs, which had been in my hands (we did in fact win on board four) just as victory at Getafe had been in Pato's hands. I resigned very shortly. It was rather longer before my head stopped buzzing and longer still before I could actually speak. And if I get a full night's sleep tonight it will be the first one I have had since then.

You will gather that there was a win there, and not such a hard one to find (if, indeed, there is only "one"). What did I miss?

It took me about ten minutes to come up with this.

Indeed. But there's a short cut too.

Ten minutes is more than I had. But I think a reasonably sharp tactical eye shouldn't need ten minutes.

I looked for twenty minutes and didn't see that idea at all...

Have another look, forgetting everything you've read so far, and see what you can see.

And so it does. I guess I didn't consider it because it only threatens f2, not f2 and h2 both. But of course the point is that it gets the queen away from the c6 knight while being out of range of a White move g3. So White's dead.

I thought about the immediate 23 ... Qf6 but didn't like it because of 24 Rxd6. ... It's better to have the White pawn on g3, isn't it? Then a8-h1 diagonal and the part of White's second rank around his king are exposed.

It's better to have the White pawn on g3, isn't it?

You'd think so, wouldn't you? But then again, on g3 the pawn blocks the d6 bishop's access to a check on h2. That said, it does cut out the Rxd6 line which just loses to a very swift mate if the pawn's on g3.

But of course, they're both winning lines and if I have a preference for Qf6 immediately, it's partly because it's one move faster but partly too because I don't really think that anybody, having seen it, would then attempt to finesse it with Qh4 first.

(If this is correct, then 23... Qf6 is more efficient but gives White the chance to play g3 and allow a nice finish.)

I'm not sure I haven't missed something here, though.

OK, after several false starts (meaning I would almost certainly have lost in Justin's position) the following suggests itself:

(am typing this in a cafe on a dying battery, so haven't checked these lines out to the required depth)

Not if White plays g3 first and Rxd6 second.

Campion - it's too slow, White plays Nd5 and the rook doesn't get to f6. However, if Black plays ...fxg6 instead, it's a draw because White has to put the king on h1 allowing perpetual rather than on f1 where ...Rf8 check wins. You're right to suggest that ...Kh8 is the move rather than ...Kf8.

Did nobody get "Contra, against the run of play" then? I dunno, wasted on here I am....

Not if White plays g3 first and Rxd6 second.

I think that misses the point, which is that after both Qh4 and Qf6, Rxd6 is the best move, so neither is objectively superior.