When I moved to London at the start of 2002 my first digs were in Acton. I left there after six months and moved to Brixton. This led me to wonder whether, when I next moved, I would be obliged to go to Camberwell or Croydon or Camden, in order to preserve the alpahbetical sequence. As it turned out, I skipped C completely and went to East Dulwich, thus getting both the D and E at once, but in the wrong order.

The first time I missed a win against an International Master, my opponent was Jacob Aagaard. The second time, it was Vlastmil Babula. To be honest it wouldn't much surprise me if I missed twenty-six wins against International Masters, working my way right through the alphabet, and never ever won one. However, I may have to chalk them off out of sequence, like a trainspotter does, since I have leapt over the next four letters of the alphabet and landed on G. G for Sergio Garza, the IM who I played, and should have beaten, in Zaragoza on Saturday. 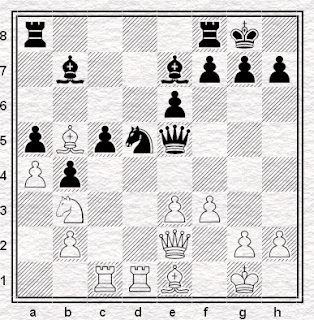 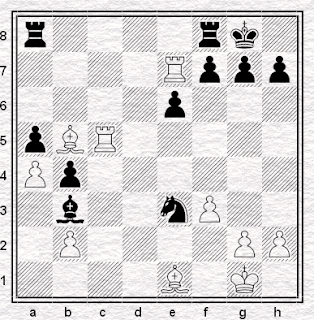 A certain amount, although of course Black is better (the strong square on d5 as well as the pawn) and of course White is fighting for a draw. However, it wasn't the compensation that led me to reject this line - it was that I overlooked the 22...Bd5! idea, saving the piece that 22.Rd7 seeks to win. 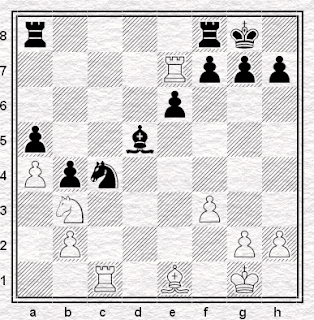 This is a better version, for Black, of the previous diagram, with White's c-rook in a weaker position and Black's pieces in stronger ones. It would still take some winning, of course, but I think it is a won position.

It's not what I played: having missed the ...Bd5 theme, I didn't see how good the queen capture was for me. Why, however, I played the knight capture instead, 21...Nxe3?? losing for exactly the same reasons as 20...Nxe3 - reasons which I had already seen - I don't know. "Time-trouble", said my opponent after the game, but it wasn't. I had eleven minutes left after 20...c4. Time enough, I think. Time enough to see something that I had seen already.

Thnking about it while writing this, I suppose that if I'd seen the ...Bd5 theme, I'd have played it the first time round, rather than looking around for something else and finding the ...c4 idea. The discovery was the consequence of missing the very idea that makes that discovery strong. Still, the fact remains - the idea was there, and I could have seen it, and I didn't.

So another one passes me by: that's three, or four if we count the slightly different case of the man I beat who should have had his IM title but did not.

Oddly, I've had the black pieces in all three games where the wins have passed me by. Perhaps, though, not so oddly. I think masters generally play within themselves when they meet club players, not taking tactical risks, expecting the club player to play unsoundly, to expose their lack of opening knowledge, to make it relatively easy for them. But, with the black pieces at least, I don't often do that - I tend to know what I'm doing in the opening and I tend to play with a degree of self-discipline against a stronger player. (It's different with White, partly because I know and understand less about the opening, partly because the game is less amenable to following your opponent's ideas and aiming for equality. The pieces are, in a sense, set up differently.)

So I tend to get a decent position and sometimes - sometimes - that makes the opponent nervous, or impatient, and then they take the risk and try to force an advantage where there's none to be had. Which is our opportunity: like a football team choosing to defend, withstand the pressure and wait for their chance on the counter-attack.

But you have to take your chances - and I don't. Because when the time comes there are complications, and I don't play the complications at all well. (In truth I play them not only badly but, as I did on Saturday, irrationally.) So we have a pattern: if not an alphabetical pattern then a thematic one. Self-discipline, good position, good chance, good chance not taken, blunder. It's going to keep me awake at night. It's going to keep me awake at night until I win one.
Posted by ejh at 9:05 am

I, on the otherhand, dream of getting good enough to play an IM in a regular tournament or club game - even once.

Open tournaments are your best bet. I seem to remember three IMs last year at Essex in a relatively small field. Link.