Guest post by Martin Smith
Just what is it that makes today’s chess sets so different, so appealing? Not a lot. They all look the same. So very Staunton. And this was for Julien Levy, promoter of Surrealist Art, the inspiration for his art-event "The Imagery of Chess" in 1944 in New York. It showed off sets for the 20th century. Hypermodern times demanded hypermodern pieces. 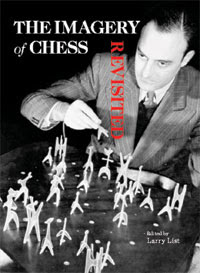 Julien Levy in a black square bind in 1944/5
on the cover of a 2005/6 reprise of the original show
Part exhibition, part multi-media installation, part performance art: The Imagery had chess sets, chess-in-art works, and chess-related modern music from 32 chess-interested artists and designers, with Surrealist-in-Chief André Breton divesting himself of chessic epigrams.

In the midst of all the fun and games the odd game of chess was shoe-horned in, notably in a "'pre-happening' happening" where blindfold wizard Koltanowski took on Levy and six of his chums, using various anti-Staunton sets, with Duchamp as facilitator. Not distracted by the outasight and out of sight pieces the maestro, visualising in Staunton presumably - so last century - chalked up a 6.5-0.5 victory including among his victims Max Ernst whose "The King plays with his Queen" (Chess in Art XIII) was in the show.

Artist and critic Larry List has magnificently chronicled this and later chess/art exhibitions (note 1) and shows how 1944 wasn't the first time modern design and chess paraphernalia had played with each other. Levy's event included some sets conceived twenty or so years earlier, for example the celebrated Bauhaus set, a brutal but refined fusion of form and function.

Analysing the Petroff at the Bauhaus.
Alexander Schawinsky played and lost
with a Bauhaus set in the Kolty simul.
No help that he had studied design there. 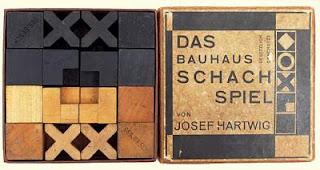 In de-cluttered style the Bauhaus set sits snugly in its own designer box and would look good on the shelves of Muji – so this century.

At about the same time in the twenties the Russian Constructivists displayed three large squares of colour using primary red, yellow and blue, declared the end of painting as we know it (Duchamp would have approved) and turned their talents to applied design in the service of the Revolution. For a Workers' Club they created a chess table that was recently reconstructed at Tate Modern (note 2) and in 2003 in Japan. 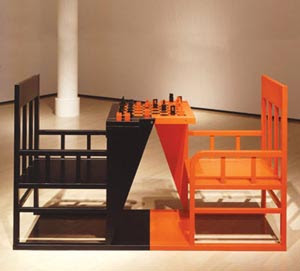 Rodchenko chess table fit for workers.
The Comrades weren't on Levy's guest list for obvious reasons; a shame because for panache their design gets top marks, with nice practical touches such as integral seating for players and (in the Tate version) boxes for pieces. The combo certainly beats the usual trestle tables, dodgy chairs and hope-for-the-best approach to set storage, so let's not cavil that there’s nowhere much to rest the elbows, and forbear to suggest that next time, please, get a players' focus group to advise on the colour scheme.

Duchamp was, of course, in the thick of it at the Levy show. He knew a thing or two about chess tables having built in 1919 the "Buenos Aires" travelling board (to go with his own-design set) a fold-up mobile job, for use among the gauchos of Argentina during his respite from the inconveniences of post-war USA. As a serious player he designed-in clocks and space enough for score sheets, refreshments, fag-ash - so last century - and several pairs of elbows, but style-wise his table was uncharacteristically restrained – so it wouldn't distract the players maybe or, more crucially, frighten the horses. 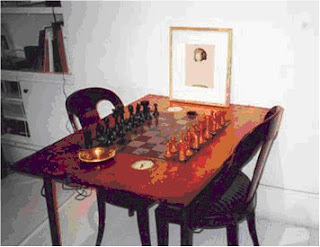 Duchamp's collapsible chess table with mod cons.
For The Imagery Duchamp broke the habit of a lifetime and left provocation to others, in chess set and table design at least; for example Isamu Noguchi, with whose creation Levy is playing at the top of this blog.

Noguchi’s chess table with red and green men
It was the hit of the show. Noguchi was from Japan, his sources were Oriental and Eastern, and his design an exuberant change from, say, the machined minimalism of Man Ray’s 1920s effort. However, looking closely, it is difficult to resist the suspicion that Noguchi allowed himself to be diverted by two signal achievements of Western culture: Sci-Fi B movies and table soccer. Perish the thought that this was the real reason for its popularity.

For musical diversion the score of John Cage's "Chess Piece" was inscribed on a chess board; thus it could be looked at, played on, and perhaps played. Or perhaps not. The sources say that "Chess Piece" wasn't publically performed at The Imagery, and not even played at all, even by Cage, even privately, ever, until recorded in 2006. 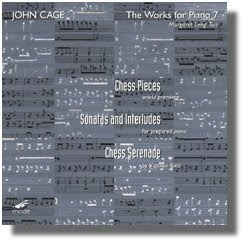 A piece of "Chess Piece", as a CD cover (note 3) seen but not heard at The Imagery. The full score/piece covers all 64 squares.
It has a beguiling simplicity, and a Middle Eastern/Iberian flavour. Although it is clearly composed by the same hand as the better known, and metallic, "Sonatas and Interludes for Prepared Piano", also on the CD, Chess Piece inevitably inhabits a less exalted sound world compared with one coaxed from a joanna playing bits of any old iron. The final piece, also composed for The Imagery, is "Chess Serenade" by Vittorio Rieti (another of Kolty’s victims) with the subtitle "The KNIGHT serenading the QUEEN on top of the CASTLE, while the KING confers with the bishop on the subject of the PAWNS". It is elegant; like its subtitle, it is charming; and at 1 minute 28 seconds, it is brief. Chess Serenade and Chess Piece back to back would provide the soundtrack to a game of five minute blitz.

Larry List's comprehensive and authoritative essays document the original show, its second coming in The Imagery of Chess Revisited exhibition in 2005, and other twentieth century incarnations in which contemporary artists, including a clutch of YBAs (not so Young anymore British Artists) have used the chess set as the raw material for their art-works. You can see them here and maybe read something half-way coherent about them if and when Exhibitionism is ever Revisited.

* denotes "The Imagery of Chess/Revisited" series. The others are editions of "The Art of Chess" organised by Mark Sanders and Julia Royce.

2. Rodchenko and Popova: Defining Constructivism. Tate Modern, London 2009. The catalogue shows a design drawing for the 1925 Paris International Exhibition of "Arts Decoratifs et Industriels Modernes" which has the board the wrong way round. The Tate website had the original Rodchenko design drawing where he got it right.

3. John Cage, The Works for Piano 7. Performed by Margaret Leng Tan. Mode Records, USA., 2006. It comes with a liner note by the pianist on both chess pieces. See also Paul B. Franklin and Lowell Cross "Composing Chess" in List (2005) op cit.
Posted by ejh at 11:00 am

It has one pair of fold-up legs; the other end rests against a wall (not included). May also be used for picnics etc.