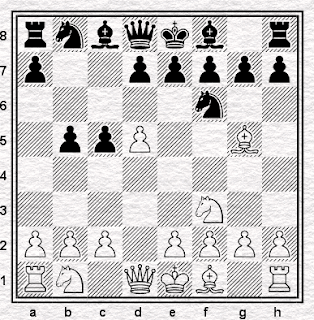 In the second round at Benasque I was drawn against the German grandmaster Henrik Teske, whose rating, at 2536, was just one point below that of the English international master Stephen Gordon, also competing in the tournament. They therefore found themselves at adjacent boards, though with opposite colours: or put another way, I was facing Henrik Teske and had Stephen Gordon immediately to my right.

I opened, as I do habitually, with 1.d4 and after 1...Nf6 employed my Benko-avoiding favourite 2.Nf3 which was followed by 2...c5 3.d5. Teske then played 3...b5, a Benko of sorts nevertheless. Not one I have a name for (so I shall here and now coin the name Benko Deflected) but one I had faced before, in the 4NCL some years ago, a game which Chessbase Online Database informs me was played against Adeyo Dasaolu. I remembered the game and that I had lost it after establishing a certain advantage early on: but I wasn't entirely sure how it had gone, other than being fairly sure that after 4.Bg5 Black had played 4...Ne4 and 5...Qa5+.

Anyway, I got up - the position being that in the diagram at the top of this piece - in order to say goodbye to my wife, who is in the habit of watching me play for the first few moves and then occupy herself with the not impossible task of finding something more interesting to do.

When I returned to the board Black was, in fact, in the very act of playing his knight to e4, and I was about to sit down and try to remember whether my bishop went to f4 or h4 (I thought the former, but I was not entirely certain) when I noticed that the chair was already occupied. Specifically, it was occupied by the English international master Stephen Gordon, who was just that second putting his black-squared bishop on f4. 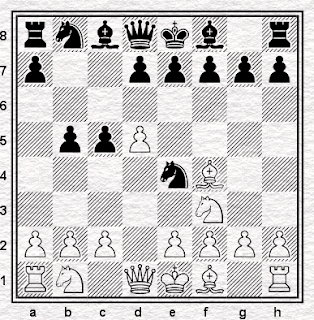 We were playing the same unusual variation, side-by-side. Or side-by-side provided I sat in the right chair.

I moved my bishop to f4. Gordon's opponent played 5...Bb7, not the move my 4NCL opponent had played. Teske, for the while, did nothing.

What are the ethics involved in situations like this? We're familiar with the famous occasion at the Gothenburg Interzonal of 1955 where three Soviet players defeated three Argentinian players in games that were identical until Black's move 13 (and in two cases, until White's move 23). Can you copy? Should you copy? Moreover, if you choose to play the same moves as your counterpart because you think they're the best ones, will people assume that you are copying? Especially when you're not only graded almost four hundred points below him, but share his nationality?

Gordon replied to 5....Bb7 with 6.a4. Meanwhile, Teske was still to move, and didn't, in fact, move, for about ten minutes. I was not entirely sure why - it was intrinsically unlikely that a player of his class had reached our position without knowing what he wanted to do next - but he told me afterwards that he was concerned that Gordon's opponent might copy him and for that reason wanted to allow the other game to get ahead of us. Eventually, though, he did play, and chose the same move, 5...Bb7. 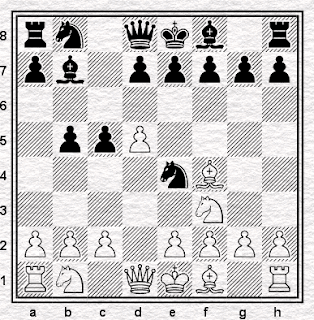 And I thought, for perhaps twenty minutes.

We were now in a position I had not been in before, and I felt it was an embarrassing position to be in. I really didn't want this to be happening. It was quite obvious that it would be wise to copy Gordon's moves: they were likely to be better than the ones I would choose unadvised. And I was being advised. Every move, unasked and unwanted, I was having a strong international master say to me "this is what I think is the best move here - what do you reckon?"

I didn't want that help. I was playing a grandmaster, something I do once a year if I am lucky, and I wanted to play my own moves. I didn't want any help and nor did I want the appearance of help. I also knew that sooner or later Gordon's opponent would make an error, Teske would play something else and that if I then, as was almost certain, went on to lose, I would give the appearance of having copied Gordon's moves for as long as I possibly could and then having caved in as soon as I'd had to make my own moves.

No - I wanted to be the one to diverge. But of course, that meant trying to find alternative moves to those being selected by a player almost four hundred rating points my senior.

What should I do? I decided to play any alternative move which seemed to me a good one and only play Gordon's move if I really thought it was the best - and therefore spent those twenty minutes trying to make 6.c4 work but eventually I was forced to concede that 6...bxc4 looked like a good reply. So I copied Gordon with 6.a4. Teske replied with the same move he had already seen at the adjoining board, 6...b4. 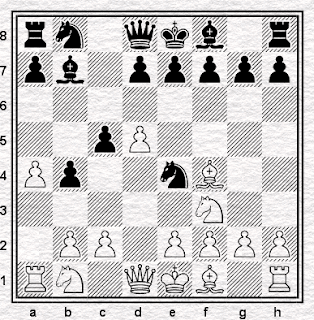 He said in the post-mortem that he felt there was nothing else, and it certainly seems that 6...Qa5+ is struggling after either knight to d2, while 6...a6 likewise suffers after two captures and 9.Nc3! when White has the centre, better development and no more weaknesses than his adversary.

But it meant I had to choose again - copy or diverge - and I could see that Gordon had already gone for 7.Qd3. 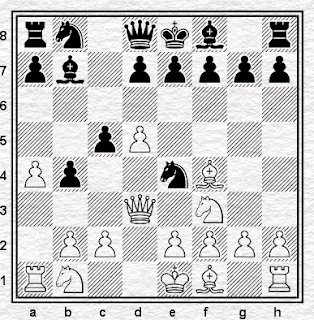 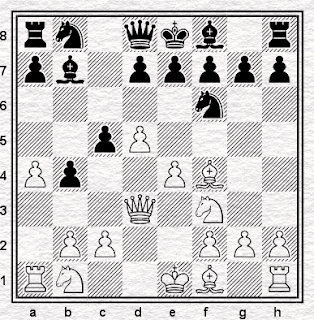 Of course Black can go 8...Ba6 and even follow up 9.Qe3 Ng4, but although White's queen is being kicked around Black is neither threatening its survival nor developing any new pieces. White's pawn centre is important: the possibility that he will be unable to castle, rather less so. But still, I was surprised by 7.Qd3 - it's not a move, I felt, I would have thought of. So if I were to find an alternative, I'd prefer to play it.

I wanted to put a knight on d2, but that would leave the d-pawn hanging - without that fact, Black would simply be much worse - and then it occurred to me that I could challenge the knight by putting mine on g5. If he swapped, that was mission accomplished: if he followed the pattern, if no longer the letter, of the other game in retreating to f6, I'd have time for 8.c4, propping up the menaced d5 pawn. It seemed all right to me: I played 7.Ng5. At last I was playing my game and not somebody else's. 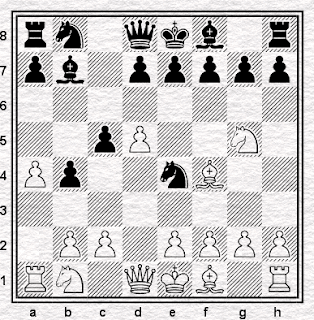 7.Ng5 is, however, certainly not the best move. I don't want to investigate it thoroughly here, not least because I have no intention of playing it again. Not because it's weak as such, but because it's clearly not the best. In contrast to Gordon's 7.Qd3, which keeps a nice advantage in space and development, it leaves White struggling - and having to come up with tactical tricks - to maintain himself in either department.

It's not as strong as Gordon's move, nor as practical. And the thing is, I knew this. It wasn't just inductive reasoning - his move is likely on any given occasion to be better than mine - that led me to believe this, it was having looked at the position it gave him and noticed that it was comfortable for White. But I preferred to go my own way.

I don't know, really, whether I did the right thing. Of course the overwhelming likelihood would have been that I would have lost, whenever our games had finally diverged. And thinking about it, I didn't lose anything compared to not having the same game going on beside me, because I don't believe I would have played 7.Qd3 and might not even have found 6.a4.

But at the same time, there it was: my once-a-year chance to take on a grandmaster and I was offered, free of charge, a nice, comfortable edge with the White pieces.

All I had to do was copy the moves of a strong player who - just as if it were How Good Is Your Chess? for real - was sitting alongside me. And would that really have been any different from what we do, when we copy the theory?
Posted by ejh at 9:15 am

I think i owuld have done the same thing. If I was convinced a move wouldn't have come into my consideration, I would probably seek an alternative.

It's very off-putting when that goes on. A strange un-explained excitement, and people tend to stop and look at the two boards - and you know what they're thinking.

I think if you had copied his moves, it wouldn't have been the same as copying theory ---- since you understood why Qd3 was a good move, and by the sounds of it had a clear grasp of the position as a whole. I don't know what I'd have done.

The same as leafing through a theory book at the board maybe ... not the same as copying theory that you'd researched prior to the game.

I can see an argument that it would be more sporting not to copy moves if you wouldn't have thought of them yourself. It's one thing learning theory but you still have to remember it.
As you say, you don't often get the chance to play a grandmaster, so it is obviously important to you to test yourself in this situation, which is also an argument for playing your own moves.

Has this sort of thing been done before? There must have been ample opportunity for it in the early rounds of Open tournaments (with Swiss pairings). Is there anything in the Laws of Chess to prevent it?

I had a similar situation in a Richmond Rapidplay a few years back. I was Black vs Mark Josse who played the Voronezh Variation of the Exchange Alekhine against me. Sitting next to Mark was GM Alexander Cherniaev ( also playing White incidentally as the boards had been placed the wrong way round ). He was playing David Cutmore ( I believe ) and in reply to David's Alekhine, he also chose to play the Voronezh! We kind of all noticed it after we had reached move 8 ( b3 ) and had a bit of a quiet laugh when Alexander said in his great accent 'The Vorrrrronezh'. I deviated on move 9 after glancing at David's position, but my choice was inferior ( I later lost a won position ). Not quite the same as EJH's example as we were still well within theory.

There's another story involving Alexander Cherniaev and David Cutmore at a Richmond Rapidplay event - maybe the same one which Richie recalls. It fits with the coincidences theme too - sort of.

Mr. Cherniaev approached the organisers' table just before the start of a round and complained that he'd been paired against the opponent he'd just played in the previous round. In fact, he was wrong - he'd been paired with one Cutmore brother after the other.