Here's an oddity I came across after reading about the Foxwoods Open in the latest New In Chess. The tournament was won by Darmen Sadvakasov in a play-off after, so NiC reporter Loek van Wely tells us, catching up the leader in the final round with a win on the Black side of the Exchange Slav.

Now there are few variations that interest me more than the Exchange Slav, particularly if Black actually manages to win, so I went looking for the game score and found a pgn file with the relevant game. However, scrolling up to find it, I found myself distracted by a different game, also in the Slav, in which White lost very quickly in a variation known to be a draw.

The game appears at the bottom of this report and was played in the final round between IM Justin Sarkar and GM Julio Becerra Rivero. Both players began the final round on the same score, 5.5/8.

The game went as follows: 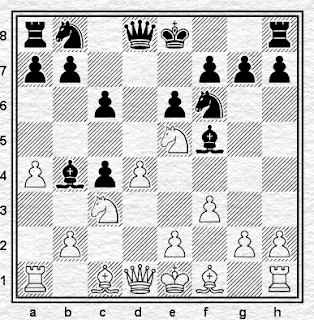 This line was popular at super-GM level in the Nineties: later 7...c5 was tried in the Kramnik-Topalov match. Rather than 6...e6 the variation with 6...Nbd7 is more common presently, especially if Black has any interest in playing for a win. 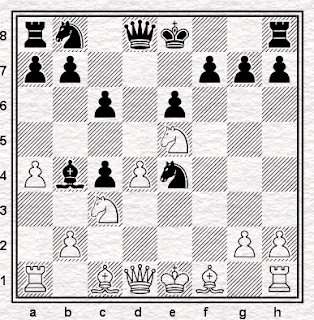 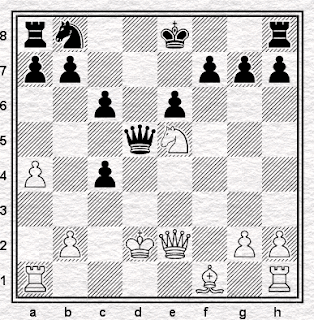 giving a much-explored position in which White's piece is now generally judged to just outweigh Black's three pawns, although the line remains perfectly playable (indeed I play it myself) provided Black is prepared to accept a draw.

I say this because not only is the main line difficult to play for a win if White is not in the mood for a contest, but in fact White has an alternative tenth move which makes it almost compulsory for Black to accept the draw: and this move, 10.Qf3, is what Sarkar played. 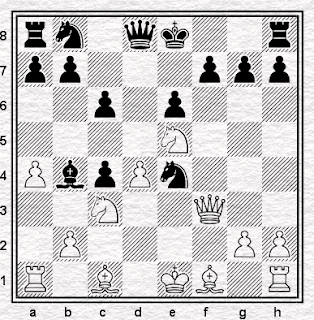 This threatens mate on f7 and the knight on e4 and thus (unless Black just wants to be a piece down) forces the response - played by Becerra - 10...Qxd4 which was met by 11.Qxf7+ Kd8 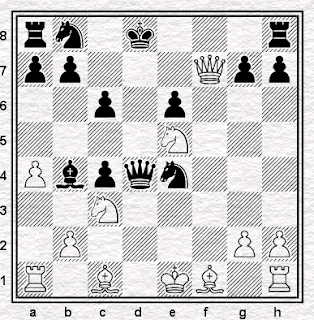 However, Becerra got one. Because Sarkar didn't take the draw: instead, he took on g7 immediately, 12.Qxg7?? 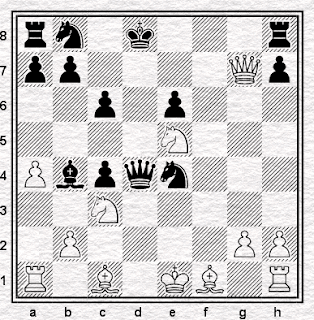 Odd, that this should happen to an International Master with a 2400+ rating and prior experience of the variation, but such things happen, even to the greatest of us: meanwhile the lucky Becerra came fourth and took home $668.40, a rather greater prize than either player would have won in the event of a draw.

Luckier still given his apparent willingness to accept the draw for which he didn't, as it turned out, have to settle. An odd preference in itself, given that although he had the Black pieces, his rating exceeded White's by around two hundred points: given his greater strength and the prize money on offer, he surely had every reason to play for a win. Maybe he expected White, too, to play for the win, but found instead that Sarkar called his bluff - so he had no choice but to settle for a draw. Or so it seemed. Until a stroke of fortune came his way.

But such things happen.
Posted by ejh at 7:55 am

All great fun, and if it wasn't for the forced draw I'm sure 10.Qf3 would be played much more often.

I remember looking at this with the computer a while back - not being entirely convinced 10. Qf3 was really a draw and knowing that using my own brain was not a reliable method of finding out.

My copy of Fritz likes 13. ... Qh4+
thinking Black is clearly better, although when I tested the line again this evening I let things run for a minute or two and it turns into a draw by repetition anyway.

None of which gives any clue as to why Black chose to play the Slav in a must win encounter.

Perhaps worth a punt for Black though since the chances to go wrong seem to be all on the White side.

I haven't got Burgess' book, btw, so I've no idea if he refutes what I've just said.

Not so remarkable but my opponent, David Levens a 150 something graded player resigned also in the same position after 13...Qf2 in the Blackpool Challengers in 2004

None of which gives any clue as to why Black chose to play the Slav in a must win encounter.

It's not that he played the Slav that's the mystery - Sadvakasov, as I say in the piece, did the same in the same round and won. The mystery is why Black should go in for a well-known drawing line in a game where he had every reason to do otherwise.