It's that time again

[The S&BC Blog's British Championship coverage starts here. For the next couple of weeks we'll be publishing a new article every day]

It doesn’t seem a year since the last one, it rarely does these days I find, but it’s British Championship time once again, the 96th edition kicking off in Torquay this afternoon.

What to hope for from this year’s event? Other than a sense of proportion from a few of our chess playing/internet dwelling colleagues regarding the small change in the title of the women’s championship I mean.

Well, for a start I’d like the champion to be decided without the need for a play-off. It would seem that in the current climate there is no realistic prospect of anything other than a series of rapid-play games should extra time be required. If you share Nigel Short’s opinion that mixing time controls within a single tournament is very much Not A Good Thing, as I do, the only option left is to cross your fingers and just hope for a result in normal time in the first place. 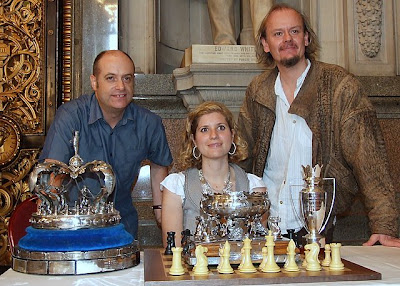 Secondly, there’s the wish, extra games or not, that a deserving winner will emerge.

Once you start talking about ‘deserving’ in terms that go beyond the simple measure of scoring more points than everybody else I suppose it is inevitable that subjectivity creeps in. Nevertheless the concept of the worthy victor seems something we can all intuitively relate to, even if we would each have our own criteria for determining what constitutes a justified triumph.
Reigning champion Stuart Conquest won the title by beating Keith Arkell in a brace of rapid-play games after they’d finished the tournament tied on 8/11. At the time I described this outcome as “justice” because Conquest had played the stronger opposition (seven GMs to Arkell’s two with an opponents’ average rating of 2457 against 2403), had worn the yellow jersey from round 4 onwards and had also beaten Arkell in their individual game.

I thought this made Conquest a very deserving indeed although Arkell later took exception - see the comments box to the original post - pointing out that his tournament had in fact been much tougher than the raw statistics would suggest. I’m happy to accept his argument, he is certainly in a much better position than I am to judge such things, but does this invalidate the idea that Conquest was the more deserving winner? I think not. I know there’s absolutely no logic in what I’m about to say but somehow it just feels right that a player who leads from the front and beats the other contenders in their head-to-head encounters somehow deserves to win the championship more than a guy who pops his head in front right at the death having previously been done over by his immediate rivals.

Many, particularly perhaps those such as Keith who make a living playing chess, would no doubt be tempted to dismiss the idea of ‘deserving champion’ altogether with nothing mattering save for the objective reality of points in the scorebook. Your position in any tournament is decided by where you stand when it finishes and not how well you’ve done halfway through after all. Furthermore it might also reasonably be asked, why should Arkell be punished for outscoring Conquest by a full point in the ten rounds in which they didn’t play each other?
Like I say, logic is not with me on this one … and yet I still have that pull towards the belief that in some way Conquest deserved to win.

One factor I wouldn’t consider as relevant in deciding a deserving champion would be style of play. I personally have been inspired to play the Classical Dutch by Simon Williams’ victory over Chris Ward in 2004 and turn down draws after Jack Rudd’s rejection of Bogdan Lalic’s peace offer last time. However, I’ve also been encouraged to go From the Opening into the Endgame, as Mednis would have it, after seeing games like this one from Keith Arkell. 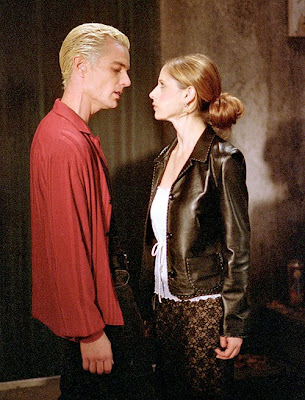 Strength of opposition? Leading from the start? Beating the closest rivals? Playing style? Whatever ... the draw is up and the first round will include Williams v Rudd on board 5 so we can at least expect the tournament to start with a bang.

Good luck one and all.

The U16 games are up on the live bit atm. On top board Victor Jones won a nice game, but missed a mate in 1 on move 35. I had an excruciating draw with him in a Richmond Rapidplay last year ---- as black from the diagram previously featured here.

Well, being the subject of a lame-ass 'looks a bit like Spike from Buffy the Vampire Slayer' gag is far and away not the worst thing that happened to Jack Rudd today.

Angus is in the major too.

Steve Ledger is also in the Major Open. And Chris Jones in the 5 day mornings week 1 (but he has just had an appalling start).

Hi Jonathan B,
There is of course no doubt that your criteria for determining which of us was more ''deserving'' is by no means unreasonable.
Others might put more weight on,for example,the fact that I didn't have any close shaves from lost positions.
These things are of course subjective,which I guess is what you are saying.
What I would ask though is that you take a look at this matter from my perspective:
In 2001 I took a quick draw on top board with Black against Gallagher,giving Joe the title and settling for second place.
I received a lot of stick in the media for this,with Nigel Short even making up a story about my mother travelling to Scarborough specially to watch me play for the title.
Somewhat hypocritically,in the light of some of the quick draws he has made,he called me 'spineless' etc without bothering to ask me for an explanation.
For the next 6 year I had no real desire to play for the title,so didn't enter the tournament.
Finally though in 2008 I decided to enter and fight tooth and nail to win.
I neither made nor offered any quick draws with anybody,and won a good game in the last round while draws were being agreed all around me.
Therefore,from my perspective,I(along with Stuart of course),was the deserving winner of the tournament.
Stuart was the deserving winner of the British title because he beat me according to the rules-ie by beating me at rapid chess.At least,from my point of view,we shared the prize money,were joint first in the tournament and shared the English title.
I suspect though that,were it practical to do so,then most professional chessplayers would prefer such a title to be decided by playing a serious match of standard play games.
In this case there would then be no doubt whatsoever about who the 'deserved' winner was.
Stuart told me that our lifetime score is something like 6:6 at standard play,with very few draws,so this would have been a great match!
Regards,Keith
ps If either Stuart or myself are to win this year then it will have to be via the ''Swiss Gambit'' approach,because we both lost in round 1!

"I neither made nor offered any quick draws with anybody,and won a good game in the last round while draws were being agreed all around me."

certainly not taking quick draws would be a factor I'd add into the mix were I to write the article again.

I suspect though that,were it practical to do so,then most professional chessplayers would prefer such a title to be decided by playing a serious match of standard play games.
In this case there would then be no doubt whatsoever about who the 'deserved' winner was


Just one more quick point viz a recent comment on the EC Forum.

I wasn't so much as saying you deserved to lose the play-off as Conquest deserved to win it.

I'm not sure anybody deserves to lose a rapid chess play-off.

Really I let of a bit of steam on the ECForum because of the accumulated affect of unfair press treatment in general.
Just to bore you with a few examples:
I think that the last time the Daily Telegraph published a game of mine in which I scored more than Zero was in 2001(against Julian Hodgson).That newspaper even surpassed itself in last years British Ch,when it published my rapidplay loss against Stuart,and my round 4 loss...TWICE!
Of course it ignored my last round win against Gawain,although it published my much poorer game(a loss) from the same opening(the 'stem' game)against Ivanchuk a year earlier.
Somehow CHESS magazine managed an editirial about the 2008 British Ch without even mentioning my name,an achievement matched by the Guardian in its reports on the Championship.
An then there was the Times.This paper,over the course of a week,published 13 of the 15 decisive games from the 2009 Southend GM tournament.Which 2 games did it omit? Correct - my 2 wins,including the one against Neil McDonald which was voted 2nd best game of the event.
AS a follow up,the paper then published my first loss in a team event in 45 games.
Ok,really none of this matters at all,except that perhaps the accumulated effect of it all can have some kind of subconscious effect on the thinking of eg national team selectors.
I have to say though Jonathan that the beauty of a forum such as this,unlike with newspaper columns,is that there is a right of reply.
The result is that we have been able to have a healthy exchange of reasonable opinions,and can now shake hands and move on.

And now I have the small matter of trying to salvage this tournament from the wreckage of my round one disaster...