This Postscript steps out from Chess in Art IV "Die Schachpartie", Max Oppenhiemer's vigorous and invigorating picture of chess in a Berlin café in the late 1920s. It is a ramble around the early 20th century avant-garde in Europe and beyond.

There is a later companion piece to the 1920s picture by MOPP that shows Emanuel Lasker, World Chess Champion from 1894 to 1921 at the board, apparently pressing home his attack with the white pieces: 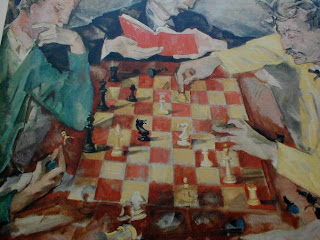 Max Oppenheimer (1885 - 1954)
Chess with Emanuel Lasker (1942)
MOPP maintains the same energetic touch as before, and appears even to reprise the same narrative trick: look again; Lasker is not actually playing a game against Herr Grün-Jacket, they are playing over the moves of someone else's game, the one in the red book, and Herr Blau-Jacket is calling it out. This explains why Herr G-J tolerates with Lasker's slovenly chess etiquette – in a proper game he wouldn't put up with his opponent dropping fag ash on d3, ex-World Champion or Nein (note 1).

How was it that MOPP was painting chess champ Lasker in the 1920s in Berlin? Did they just happen to frequent the same Konditori where they could feed their addictions to Kaffee, Kuchen, and Zigaretten. Was MOPP there to admire, in situ, Lasker's renowned coffee-house style which both Siegbert Tarrasch and Bobby Fischer considered conduct unbecoming of a World Champion? Or was there a more substantial meeting of minds?

Some clue may come from Lasker's kith and kin. His older brother Berthold was married from 1894 and 1899 to Else Lasker-Schülers, a poet who a year or so later married the founder of Der Sturm, the Haus magazine of German Expressionism. Unsurprisingly her work graced its columns at length. Even without assuming some cordiality among ex-in-laws (a big ask) Lasker must have been moving in the same circles as the leading lights of the Mittel-European intelligentsia, for whom MOPP was court painter doing a nice line in "psychological portraiture", having had his own done by Egon Schiele, no less. 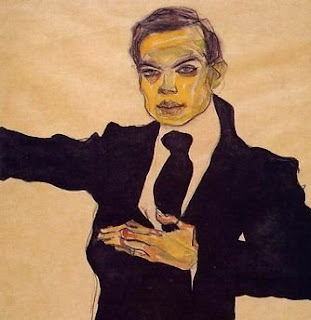 Egon Schiele (1890 – 1918)
MOPP head (1910)
Now that we have wandered on to German Expressionism, here’s a good example of what some have likened to Fauvism German-style (note 2) 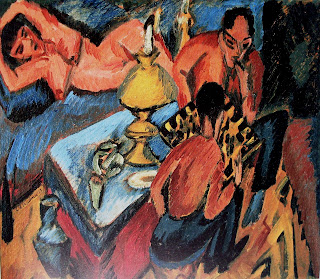 Ernst Ludwig Kirchner (1880-1938)
Erich Heckel and Otto Mueller playing chess (1913)
This is a love-in in more ways than one. Apart from the carnal pleasures invited by the reposing Mädchen, the two players, who are ungallantly lost for the moment in the cerebral delights of the game, are two of Kirchner's Expressionist comrades-in-arms; so, mutual admiration all round.

You can see the affinities with Fauvism (strong colour, dynamic design) but Expressionism keeps some distance from its decorative French cousin and heads for the raw and edgy. Heckel's girl friend (or Mueller's, or both) for example, is no odalisque à la Matisse, but is her own woman. You could even leave out the colour (unthinkable for Fauvism) and still get the Expressionist feel; they did wood-cuts to prove it, such as this one by another Otto Möller in the 1920s: 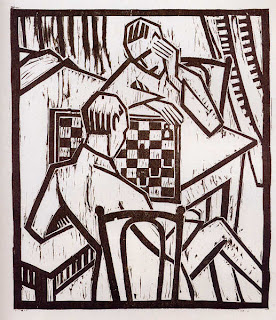 The German Expressionists were hammered by World War One and the style morphed in the 20s and 30s to something more engaged with, and critical of, the Zeitgeist, glorying in the handle "Neue Sachlichkeit", or New Objectivity. The rise of Fascism finally did for it in Europe. Kirchner and others, including Kandinsky and Klee (note 3) were denounced as "degenerate" by the Nazis and he committed suicide in 1938. Lasker-Schülers was beaten up and fled, as did MOPP. Lasker, too, ended up in the States.

So the USA was a refuge for many, and from there Expressionism re-emerged, after World War Two, on to the international stage in a home-brewed Abstract variety, promoted to establish New York as the West's cultural bastion in the Cold War, in place of a debilitated Paris and divided Berlin. For Abstract Expressionism think Jackson Pollock.

There was a less celebrated school of Expressionism in Boston, and Henry Schwartz of Chess in Art XX was a member: 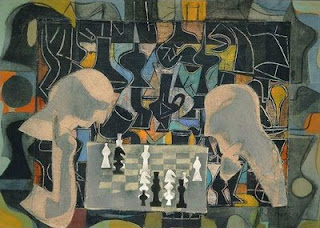 Henry Schwartz (1928 – 2009)
The Chess Players (1958)
Schwartz's use of collage emphasises flatness and pattern. There is a rather Fifties feel to it: the pieces sit on a Tupperware board and their shapes are echoed in the Formica screen behind; a bargain from Woolworth's, for sure, that would grace any condo. There are people at play, albeit with their identities ironed out leaving just the imprint of pensive silhouettes hooked on their fingers; they play a chess game with each other and a perspective game among the overlaps. Their expressive concentration infuses the scene: we are in the presence of Deep Thought. Maybe an "ism" for this half-way-house-style would be "Semi Abstract Expressionism".

The Boston group were active as far back as the 30s and 40s, before Jackson Pollock et al cornered the limelight and the dollars. They traced their influences to Europe, and like many of his German Expressionist forerunners Henry Schwartz, highly respected, was a troubled soul. He was in reclusive depression for 15 years up to 2007, and in spite of regaining his lucidity he died on 21 February 2009, aged 81 (note 4). To a dedicated artist: RIP.

1. Edward Winter in his Chess Note 4091 [scroll down - ejh] asks if anyone can identify the other players or the position. The latter appears more plausible than in many a chess painting, and in a bigger view it looks like there are corrections, maybe suggested by Lasker in the interests of verisimilitude.

2. We touched on Fauvism in Postscript: Gone Luco.

For some more chess in art:

Thanks Richard. Artinconnu has got some very interesting material, and that's not just the chess stuff; well worth a look.