What Happened Next X 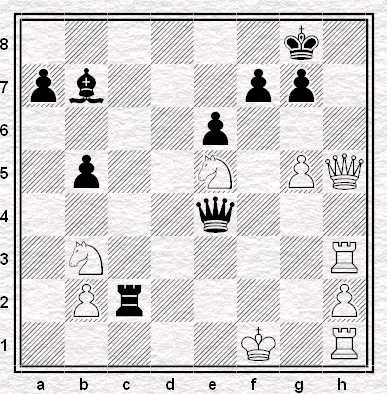 On Wednesday we left Anand and Ivanchuck in the final of the London leg of the PCA Speed Chess Grand Prix with Vishy, I'm sure you noticed, both threatening and facing mate in one. Sadly for him though, it wasn't his turn.

What happened next? Well, as Richard James pointed out in the comments box, Ivanchuk chose not to deliver mate but instead to play ... Qf4+!?.

Not that Chucky rushed this decision. In fact he thought for over thirty seconds before making this move. Scarcely credible that one of the world's best players could miss a mate in one for that long - and somehow the fact that it would have been achieved by capturing a loose rook makes it even harder to understand - but that's exactly what happened.

What follows is complete speculation on my part but here's what I think was going on:-

The move before the critical position Ivanchuk capped what was almost a fine mating attack by playing 28. ... Rc8-c2+ and Anand responded with 29. Kf2-f1. 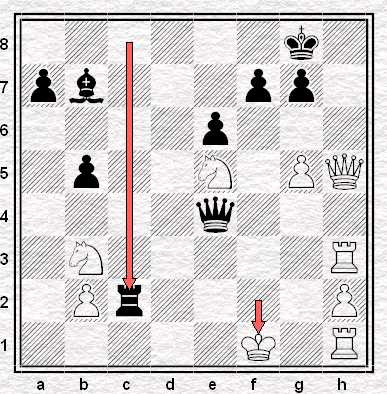 I reckon Ivanchuk was expecting 29. Kg1 - protecting the rook seems more natural to my eyes at least - and had seen before sacrificing his rook on move 24 that 29. ... Qe1 would then be mate.

Having already mentally notched up the win, and switched his noggin on to standby mode, Ivanchuk was suddenly faced with a king on f1 and no mate on e1. The notoriously nervy Ukranian just cracked up, completely unable to adjust to the new situation - even though he still had a mate, several mates in fact, right there in front of him.

Unbelievable? I'm not sure I quite believe it myself ... but do you have a better explanation?

What Happened Next? Index
Posted by Jonathan B at 8:41 am

If he was anticipating Kg1 to "defend" the rook then i don't think he would have had a blindspot about taking it after Kf1.

Best explanation i can produce is that he couldn't see the pawn on h2.