What Happened Next IX 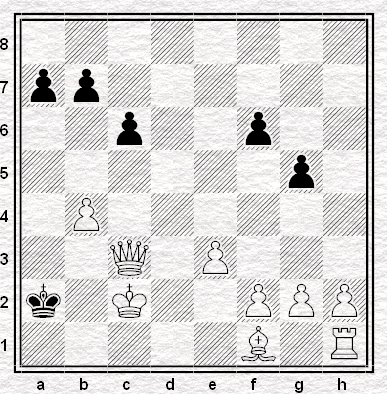 COKO III - Genie, United States Computer Chess Championship, 1971. White to move.
Not, you might suppose, the trickiest position a computer has ever faced. After all, white not only has a mate in one available, but a choice of mates in one - not to mention various mates in two (including the artistic 38.Qa1+! Kxa1 39.Bc4#), mates in three, four, and more. Except, for COKO III, this choice was the problem itself: it had not been programmed how to choose between alternate mates.
So it didn't. Instead it played something else entirely, the game continuing 38. Kc1 f5 39. Kc2 f4 40. Kc1 g4 41. Kc2 f3 42. Kc1 fxg2 43. Kc2 gxh1=Q, and thus reaching this position: 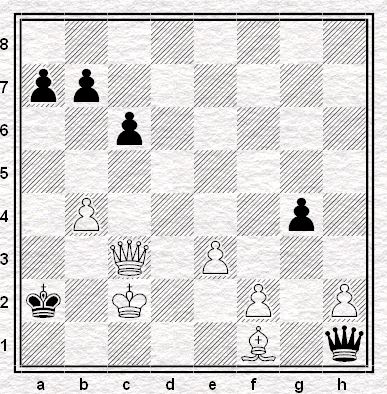 [What happened next? index]
Posted by Tom Chivers at 10:01 am

This of course is an application of the well-known problem of Buridan's Ass.

Incidentally, I once tried to test that dilemma, in practice, on a cat of my acquaintance, by presenting him with two bowls equally filled with food and seeing if he would be unable to choose between them.

He resolved the problem by trying to eat them both.

Who? Me, Tom, the programmers or the cat?

(I'm not even smart enough to link properly.)

"it had not been programmed how to choose between alternate mates"

And nor have I been! Though I'll happily choose between alternative ones.

This suggests a contest: best reverse in a tournament, season, etc. Win counts for material, draw counts for 1/2 material. Other restrictions (combination, promotion) as you see fit.

When I was much younger I once lost a game by being presented with the choice of two mates. One involved a pretty sacrifice and wasn't, er, mate...

Nowadays I just play the first winning line that I see, which can involve playing out some unnecessary endgames.

My personal Burridan's ass is of course ''Which Rook"? - I think I would have a better record of success on that one if I flipped a coin!

Credit GENIE for the cunning 40. ... g4 which meant that in the second diagram, it was White to move!

Had it been Black to play in that position, GENIE would surely have played the "desperate" 44. ... Qe4+ 45. Bd3 Qxd3+, thereby resolving COKO's problem.