We are not amused VI

An elderly and resolute gentleman sits on a park bench with his stick and his chess set. The vacant seat beside him invites you in for a game. 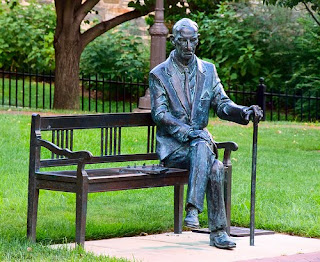 It is an unlikely tribute to a Polish war hero, brought to our attention by Mark Weeks via Tom Chivers, whereby we can enjoy this poignant sculpture and pay our respects to its subject.

Jan Karski (1914-2000) was in the Polish underground resistance to the Nazis. He risked his life to alert the Polish government in exile, and the Allies, to the Nazi genocide against Jews in the Warsaw Ghetto and extermination camps. His heroism was belatedly recognised. After the war he settled in the USA and was a professor at Georgetown University where this memorial is installed.

The life-size statue shows the modest Karski siting unassumingly on a bench. There is no bombast or heroic gesture, no sense of triumph, maybe because his selflessness was in vain. The horrors of which he warned happened anyway, for whatever complex reasons, in the maelstrom of WW2.

We aren't used to seeing a chess set saluting a war hero. As a symbol it doesn't seem quite adequate to such self-sacrifice and bravery, except as a gesture to his humanity. But it is there beside him, the person who confronts you: it is about him, and what he stands for. The walking stick reminds you also of his ordinary frailty, and he sits with a straight back determined to be unbowed by evil.

The sculptor was Karol Badnya. An article in 2003 by Jalenta Antecka about the artist, and the subject, says that Karski was a keen chess player. Sculptor Badnya taught himself the moves so as to create a chess position for the work where, if you accept the invitation to sit down and play, Karski will win in all variations! Evidently, like the rest of us, he didn't like losing at the board. Cast in bronze he never will.

We could try and check out at the position, but unfortunately the good students and/or citizens of Georgetown, Washington DC have borrowed some of the pieces, for trophy paper-weights perhaps (from a memorial to a war hero? We are not amused): 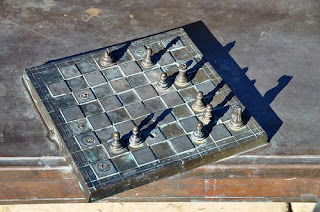 Undaunted we could go to New York to look at another edition of the sculpture, unveiled later in 2007 at Jan Karski Corner outside the Polish Embassy. It has the bits intact, apparently, photographed here by Sheena, but even with all the pieces it is difficult to figure out the position (help, please!).

Or go to Kielce in Poland to check out another edition.. 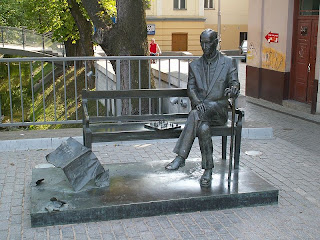 ....dedicated in 2005, but where they have put Karski's citation on a bronze newspaper blown in on the wind. I'm not so sure that this touch enhances the sense of repose in the work, which otherwise gains resonance from its placement opposite the site of another anti-Semitic outrage.

It is sobering to see so many chess sets in so many places honouring the memory of a quiet hero.

My google-fu found me this:

If you click on the "all sizes": button you can get a larger size image.

At a quick glance, I can't tell the white pieces from the black, and the position looks like nonsense.

Thanks for the link Ed. Martin is away just now but I'll pass your comment on to him for when he gets back.

This is the image to which ed refers.

It creates a new, and odd, kind of chess problem - colour the pieces so that any move allows your opponent (Karski) to mate in one. Clever. And I, for one, can't solve it.

Does setting up a nonsense position in such a context cause greater dismay than would putting a black square on the right (which of course they may have also done). Somehow, I feel it does.