I was sat at the chessboard on Saturday afternoon and my opponent was not. He was late and I had the White pieces: there would have been nothing simpler, or indeed more sensible, than to play my opening move immediately, to set his clock running before he could set off in its pursuit. But, instead, there I sat, unable to decide which of two opening moves to play. No analysis was involved: no calculation, at least not in the sense one associates with the selection of a chess move. I just couldn't decide whether I wanted to play 1.Nf3 or 1.d4.

I like the knight move more than the pawn, but at the same time I have the feeling that the pawn is stronger: it's a debate I have had with myself, for years, whether to play the moves with which I feel most comfortable or the ones I think are actually best. Moreover, I have a general plan to play the knight against players who are weaker than me, but the pawn where they are stronger: but I didn't actually know how strong my opponent was, since, as not only he, but his team, were yet to arrive, I didn't actually know who he was, or who he was going to be.

So, there I sat, aware of the absurdity of trying to work out in a couple of minutes, or preferably less, what I had spent months, or years, or in truth almost an entire lifetime trying to decide. Eventually, realising that I was entering a debate with myself that could have no end other than a premature one, I screwed my courage to the sticking-place and played 1.Nf3, on no basis more theoretical than sheer gut feeling. And when my opponent arrived we continued 1...d5 2.d4, which only served to emphasise the futility of the process. As do so many other things in life.

Well, if one is to spend one's time pondering the futility of life, one will never get round to pressing the clock at all. That particular thought only occurred to me later in the weekend, and just as well, as it set off a train of thought which might have had me lose on time without making a move at all: beginning with the paradox (or fallacy) of Buridan's Ass, who, presented with two options neither of which is superior to the other, starves to death for the want of the ability to choose one over the other.

There are, I'm sure, applications of the paradox in the early history of computer chess. But I think it may be Paolo Maurensig's The Lüneburg Variation which tells of a chessplayer who, after their professional career is over, and confined in a psychiatric ward, occasionally stares at a chessboard, with the pieces set up in the starting position, for twenty minutes or so, pushes a pawn to c4, looks at it for a while and then takes it back. The more you know, the more you realise that you know, for sure, so very little: the less certain you become, the harder that it is to act, until, perhaps, your uncertainty overcomes entirely your capacity for action. Knowledge isn't, necessarily, power. It can even be its opposite.

There's a celebrated Alan Moore story, I'll Never Forget Whatsizname - part of The Ballad of Halo Jones - in which a character (the Glyph) recounts how, having changed their mind as to which sex they wished to be no fewer than forty-seven times, eventually ceases to know which they are, or even to be perceptible to other people for any length of time at all.

People stopped listening to what I was saying and didn't seem to notice I was there. Everybody forgot about me. I wasn't a boy, I wasn't a girl. I was just a cypher, a sort of glyph.

Life's very difficult when nobody know's you're there. I couldn't get a job because ten seconds after the interview they forgot about me. Also, it was impossible to get served in restaurants.

Finally, my landlady forgot I was living in my apartment and leased it to another family. I protested, but they didn't notice.

I like this very much as a metaphor for our indecision in chess. Changing our minds over and again about which openings we want to play, eventually we cease to have any idea what to do, or what we want, at all. And if you can describe our character, as chess players, by reference to our opening repertoire, then eventually, like the character of the Glyph, with all those changes of mind, it disappears entirely. We end up without characteristics. Knowing nothing.

I'm not there yet. But I wonder if I am on the way, after forty years of playing chess, to losing the capacity to decide. And when it's gone, it won't, I think, come back. All that is left is the uncertainty.

The strangeness didn't end when I played my move, or when my opponent entered and replied. He had used up six of his ninety minutes when he played his first move, but with a thirty-second increment he'd got a minute back by the time he reached move five: 2....Nf6 3.c4 e6 4.Bg5 Be7 5.Nc3 O-O 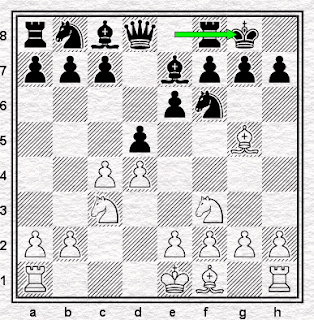 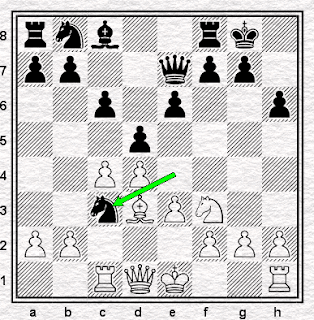 By the time he played his last theoretically-approved move, his thirteenth, he was well past the half-hour mark, which given the increments meant he'd taken about forty minutes thinking time - to reach a position which has been known to the books since at least 1984.

That's not so bad, you might be thinking. Just because it's in the books doesn't mean he knew it was there. Perhaps he had to work it out himself. Quite so, in principle. Only thing was, that I'd reached the position after White's thirteenth - 10.Rxc3 dxc4 12.Bxc4 Nd7 13.O-O - once before. A year ago, in the same round of the same competition, against precisely the same opponent. The only difference had been that on that occasion, my opening two moves had been played in the other order. Other than that, it was exactly the same.

Same player, same variation, same position. He had been there before. He must have known it. Repertoire or preparation, he must have known it. And just as curiously, on the previous occasion he had played his tenth with ninety-one minutes - all his original time plus another minute - on the clock. This time, seventy. I can't understand it: the forty minutes or so he used on his first thirteen moves could have been closer to forty seconds.

He was down to a couple of minutes by move thirty-three, when he missed two chances, one at least of them simple, to draw. Just one or two of those forty minutes ought to have been enough. 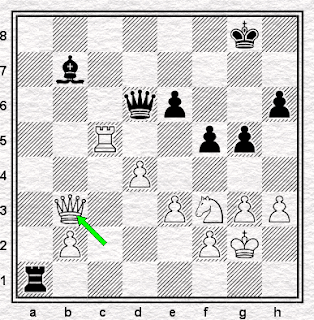 Position after 33.Qb3
So what was that about? What - in every sense - was he thinking of? Whatever it was, it wasn't worth it. It made no sense. Whatever reasoning he was using was false. Pointless. Erroneous. Fallacious.

So, as it happens, was Buridan's. I once tried out his thought-experiment on a cat I knew, giving him two identical options, two bowls of food of exactly the same size, to see how he would approach the problem of which option to take when neither could be meaningfully distinguished from the other.

As it turned out he did not waste to death while the dilemma failed to resolve itself. He suffered no misfortune either physical or philosophical. There was no reflecting on futility. Matter of fact, there was no delay at all. He attempted to resolve the problem by trying to eat them both.

Curiously enough, in my game on Tuesday night I spent several minutes deciding between 1.e4 and 1.d4. I decided at the start of the season to switch to 1.d4 - but my opponent on Tuesday was someone I had beaten easily before with 1.e4. Furthermore, I knew he was a repertoire player and I particularly liked playing 1.e4 against the opening he always chose.

But I went with 1.d4, on the basis that I had already decided too, and anyway if I went 1.e4 and he varied early from my previous win it would probably discombobulate me psychologically. We had a short draw.

Stuart Conquest often has a think before his first move and I think there is a story that David Bronstein once thought for nearly an hour before making his first move (as white).

On Tuesday I was black and my opponent played the London system. I thought: this is boring, nothing is going to happen for a long time and allowed my opponent a positional advantage as early as move 6. It's never too early to start analysing the position (I used to know about 10 moves of theory in several openings but because my opponents usually don't play it, I've forgotten most of it now).

I'm currently considering how much I like either variation an factoring in how likely I am to get them rather than be able to transpose into a QGD or a KID or whatever.

Life would be a lot easier if I just played 1. d4 I suspect.

I often take a fair amount of time reaching known (to me) theoretical positions (and yes it does contribute to future time trouble).

Basically my theoretical knowledge is patchy (and mostly old) these days, so I am never happy until i am clearly in original (at least to myself and my opponent) territory.

Once both of us are not relying on prior knowledge then we are on even ground.

So on every move in every game i am looking for something original to do (at best new, at worst off the beaten track and less known to my opponent). But the consequence is that sometimes nothing convinces and you find yourself in a theoretical position after 40 minutes anyway.

I had the same experience where an opponent reached the *exact* same theoretical position as our previous encounter. I asked him afterwards why he expended so much clock-time early; he said he remembered it all but he wanted to check everything to make sure.

So like Richard he was looking for something different and didn't find it. Unlike Richard though he spent 90 minutes instead of 40. Too bad, I won.

I have pretty much given up on trying to be creative in the openings, but I still have three reasons to think in theoretical positions: (1) to warm my brain. Without that warmup, it's a rough transition between the known theoretical position and the totally unknown "just chess" position that might take several moves to develop. (2) to deceive my opponent about how much book I know. Appearing not to know the opening can elicit all kinds of bad play, from attempted traps to overconfidently rushed moves to playing by rote. (3) to not tip off the opponent when they are still in book or that they just left the book.