Someone has been aping our Alice! A little Italian scamp has been doing it since 1922. Like Alice he disappeared through the mirror, and had adventures with a talking chess set. Well, Gordon Bennett and Così Fan Tutti; is nothing sacred? We are not amused. Off with his head! 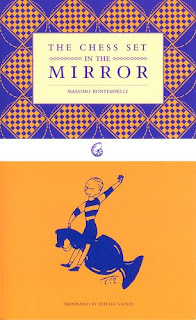 Massimo Bontempelli's "The Chess Set in the Mirror" (CSM) sounds suspiciously like Lewis Carroll's "Through the Looking Glass" (TLG) published 50 years earlier. It was only translated from Italian in 2007 (details in acknowledgements/sources etc at the end), and literary scholars have yet to wake up and pronounce on the coincidence. But no matter; Streatham and Brixton Chess Blog is ahead of the game and will conduct its own inquiry, following on its scholarly revelations (by ejh and the British Library) about the publication date of TLG in Chess in Art XVIII, now definitively said to be precisely 1871. Or 1872.

Both CSM and TLG are all chess sets and mirrors, and both have bespoke illustrations, by Sergio Tofano (aka STO), and John Tenniel, respectively. However, while there is much the same in general terms, there are enough devils in the details to suggest that the Italian job is more than an audacious smash and grab. In this first post we'll examine the written word, the characters and their stories. We'll come back to the illustrations in a second post on the subject.

You probably read Lewis Carroll's Alice in Wonderland, and Through the Looking Glass many, many years ago and know, or vaguely remember, how he wove verbal treats in to the warp and weft of the books. TLG is a serial play on words and the causes of words.

You almost certainly read it in English. The Chess Set in the Mirror was written in Italian, and now 80 or so years on it comes to us in American-English thanks to a translation by Estelle Gilson. For an English-English speaker, as is your blogger, it is impossible to tell if the original Italian uses puns, rhyme, nonsense and all the devices that Carroll plays with, but even if it was voiced in velvet the Am.-Eng. trans. is cut in plain cloth indeed.

CSM just doesn't have the linguistic sparkle that enlivens TLG. Its prose is straightforward, even pedestrian. This may be fair enough for young readers finding their feet, but only so long as the yarn is rattling good - which in fact it is. In the translation there is a sprinkling of American idioms, to make our friends across the pond feel at home, and of some rather adult words that seem a little out of place in something that has the "specificity" (that was one of them, on page 45) of a children's book.

So this jury is out on the translation. Let a more youthful readership pronounce on its readability (sentences first - verdict afterwards, as the Queen of Hearts might have said) and let's turn to the plot.

There is no getting away from it: Massimo Bontempelli's (autobiographical?) ten-year old is a boy; and a mischievous one at that, and unlike goody-two-shoes Alice (she's seven and half, and she's a girl) is in trouble by page five. We find him locked in a room as punishment, and bored out of his inquiring mind. Whereas prissy Alice dreams through her way through her looking glass world trying desparately to be polite to all and an army of sundries, our unnamed kid wants to punch the White King at their very first meeting. That's my boy; though his threat, in the American way, to "sock" someone, and his calling others "morons" later in the tale, takes him dangerously close to an ASBO. Evidently he is on a short fuse, in the Berlusconi manner, which is probably what got him into the naughty room in the first place. 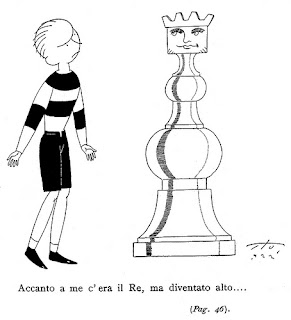 "the king was standing next to me...almost as tall as me..."

Note: the illustrations in this Italian edition, at least, have captions; these are omitted in the English edition.

Both plots wind their ways through worlds on the other side of the mirror, with Alice struggling to play her part in an hallucinogenic game of chess, which makes a modest advert for our favourite obsession. It may inspire younger readers to sample it charms. Just. Our bambino, however, reflecting on his adventure says that "chess unnerves him" so he could never learn to play, which is not the sort of thing we want to hear. He then goes on to redeem himself by adding that "chess lovers say that this is a serious defect", which is mature beyond his years and deserving of a piece of plum pudding. He needs it. Unless I am mistaken the poor lad doesn't get a bite to eat in all 114 pages, whereas Alice and her chums are for ever tucking into cakes, bread and butter, ham sandwiches, oysters, a leg of lamb and enough tea to drown a kitten (which is something else one would like her to do in that insufferably cosy Victorian parlour of hers). 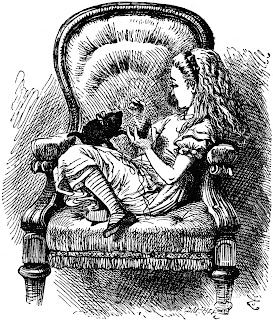 Go on Alice, put us out of our misery

Apart from the tea-breaks there is another profound difference in the realities that Alice and Boy discover on the other side of their mirrors, and what the chess sets did there. For Alice her a characters are amusing, odd, cantankerous according to how the author/Alice's unconscious invents them. They are figments, and the pieces morph and take on human personas. Moreover, they are only realised and exist behind/in the mirror, and since it's her fantasy they can do what ever she jolly well pleases, such as fall off a horse every five paces, as does the White Knight, get up, do it all over again and still get somewhere in one piece.

Boy has encounters of different kind. The characters he meets are real, or at least they were once upon a time. His grandmother, the burglar, the mirror-maker, and all the rest he bumps into on the other side, are the reflections, stand-ins, dare we say Avatars, of/for the real people who have ever looked in the mirror, captured at the time and age when they looked. After all, we do say, don't we (in English anyway; I don't know about Italian) "I caught myself in the mirror" as if to imply the reciprocal possibility: "I was caught by the mirror". "I am your grandmother"

So, behind, or in, the mirror they talk, they walk, and they live their kind of normal lives so as to give the book a story and to embody the mind games that the author plays with us about the nature of what we see; the difference between people, objects, reflections (and chess pieces); what happens to them when they are aren't being looked at; and, not to be overlooked, what happens to the whole shooting match when the mirror breaks - and why that is pretty bad news all round. All in all Bontempelli creates a clever dialectic between the two sides of the mirror that makes TLG seem somewhat, forgive me, one-sided.

And we mustn't forget the chess sets. In CSM, as in TLG, they are prone to belligerence (I suppose they were made that way), but in Italy they do remain chess pieces, have proper conversations and make words mean the same as everyone else - unlike egghead Humpty-Dumpty in TLG who famously insists on maintaining his own idiosyncratic Babel function and disappears into a semantic black hole. To sum it up: CSM has chess pieces and people; TLG has chess pieces as people.

So Bontempelli's little book has some delightful touches, and some teasers to ponder upon, including an echo of Bishop Berkeley's famous challenge to prove something exists when not being looked at. Bontempelli is credited with coining the term "Magical Realism" as a literary genre, but after CSM's BB moment "Magical Idealism" might be a better tag, and sometimes after a heavy session with Lewis Carroll one feels that "Magical Ideasrathertoomuchism" just about sums him up (let alone Dodgy Ideasaboutlittlegirlsism). All in all, both authors come out of it rather pleasingly (urghh...that sounds just like Alice), and so each should get an "ology": Lewis Carroll, for his word-play, a creditable Philology; and Massimo Bontempelli, for his mind-games, a whopping Epistemology.

Now please go and have a good look at "yourself" in the mirror and come back for the second post "Mirror Looking" to discuss the illustrations in the books.

"The Chess Set in the Mirror" written by Massimo Bontempelli, illustrated by Sergio Tofano, and translated by Estelle Gilson was published by Paul Dry Books, Inc., Philadelphia, in 2007. Find out more here. The repeated "temptation" motif in the post above is one of several charming chapter markers in CSM.

The Journey Round My Skull blog for 29/11/2009 was a source for the Italian edition illustrations, and an insight into the affection with which CTM, and STO, are held in Italy, akin to ours for TLG and Tenniel.

A good source for TLG, and other things Alice, is the Penguin Classics Centenary Edition 1998.