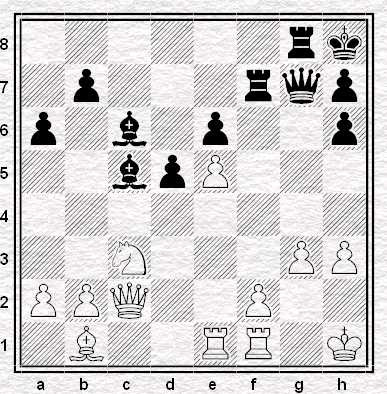 So as the new decade begins Raymond Dennis Keene finds himself to be the subject of articles in Private Eye and Kingpin* once again. Plus ca change I suppose, although judging by this post (the ninth photograph down is highly amusing, Sean Marsh's enthusiasm for the role of Ray's Latest Bitch less so) the man himself doesn't seem to be too troubled by the current turn of events. Anyhoo, this seems like a good time to get back to Raymondo the chess player (previously: RCP, RCP II, RCP -I) where much of interest awaits us.

One of the curiosities of Ray Keene’s playing career is that he never managed to qualify for an Interzonal tournament. He finished 11th-12th of 16 (+3 =11 -3) at the Caorle zonal in 1972 and 4th of 8 (+2 =4 -1) at Barcelona in 1975 which although far from disastrous performances were nevertheless a little disappointing when compared to his exceptional results at countless British Championships and Olympiads. It's true that British qualifiers from zonal tournaments were a rare breed back in the early 70s, Raymondo himself wrote at the time** that the last home player to succeed at a zonal was Harry Golombek in 1952 (!), and yet lesser players than Keene managed it. If David Levy (English but representing Scotland) made it through from Praia da Rocha in 1969 [he didn't - see comments box] and Gennady Sosonko won in Barcelona a point and a half ahead of RDK despite being 35 elo points lighter, then our man could certainly have hoped to have made at least one Interzonal appearance.

Ray never got the chance for a third bite at the cherry because by the time the Amsterdam zonal in 1978 came around he was busy helping Viktor Korchnoi prepare for his World Championship match against Karpov later in the year. When he looks back on this aspect of his playing career perhaps it is some consolation that his game against Hutchings won the prize for the “best attacking combination” at Barcelona.

Of the position at the top of today’s blog Keene would later write,

“The concluding combination is not very difficult, but what influenced the prize judges was probably the logic of a dark square counter-attack beginning with 13 … Ng4 ….”**

‘Not very difficult’ for a soon to be grandmaster perhaps, if trickier for the rest of us, but an attractive finish nonetheless. 13 … Ng4, by the way, was an original RDK idea. A theoretical novelty, moreover, that Informator (21) considered to be one of the most significant innovations of the year. 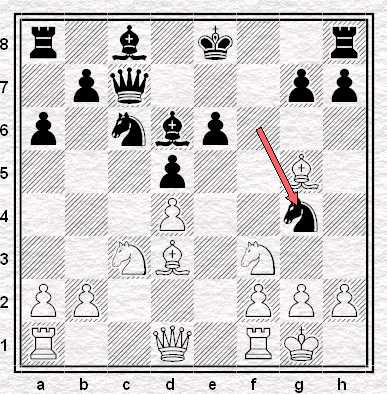 The usual move in this position is 13 … O-O intending to answer 14 Bh4 (idea: 15 Bg3 to exchange the bishops) with 14 … Nh5. At first sight Keene’s 13 … Ng4 looks rather childish in comparison. The transparent threat against h2 is easily parried and in doing so White seems to force Black either to waste time retreating the knight to whence it came or accept busted kingside pawns by going back to h6. In fact the latter is exactly what Keene had in mind.

The point behind the apparently frivolous knight manoeuvre is that the White can only mangle Black’s pawn structure at the cost of giving up the g5 bishop which inevitably reduces his ability to counter Black’s dark-square strategy mentioned in the quote above. There are less co-operative ways to play than Hutchings’ response but still it’s surprising how easily Black built up a massive attack on the kingside after 14 h3 Nh6, 15 Bxh6 gxh6***. Surprising to me anyway, and to Hutchings it would seem, but evidently not to RDK who had clearly prepared the line most carefully.

So we're back to the puzzle position where we came in. Black to play and finish off a fine attack. He may be better known for off the board issues these days and he may have underachieved at zonal tournaments but nevertheless this game, the brilliancy prize and the important theoretical novelty prove that Ray could most certainly play.


* Both concerned allegations the details of which, along with many other things can be found at www.kingpinchess.net

** Becoming a Grandmaster, Batsford 1977
(I have translated the descriptive notation of the original into algebraic)

Levy didn't qualify - it was Gligoric and someone else. What he did achieve was the international equivalent of winning the grading prize, in that a score of 67% or above was enough to be awarded the IM title. So Levy was an IM before Keene (and Hartston who also played at Praia)

Hartston's account of the tournament appeared in "How to Cheat at Chess" (or was it "Soft Pawn"). Marriotti of Italy (and sometimes Bayswater) was also playing and beat Gligoric with the six pawns attack against the Kings Indian.

Oops. Thanks for the correction Roger.

I used to have both How to Cheat at Chess and Soft Pawn btw but they both got purged a couple of years ago when a Great Terror saw many of my chess books (and much else) eliminated in name of clearing out my spare room.

I've got How To Cheat. I'll have a look and see if it's in there, but it doesn't ring a bell.

...says Minic, Filip, and Gligoric finished equal first. They all played in the 1970 Palma de Mallorca Interzonal, although none of them qualified into the Candidate Matches. - Mark

No sign of it in How To Cheat (though I do wonder who Hartston could have been parodying in the chapter about chess journalists). I notice from my Chess and Bridge catalogue that Soft Pawn is currently available for two quid...

I might be wrong about Hartston's report being in "Soft Pawn". It first appeared in the University magazine "Dragon" and was later republished in Richard Eales' book "Cambridge Chess". This was first published by BH Wood in the late seventies and is now available from Harding-Simpole.

The "Write Notes the Experts Way" parody also first appeared in "Dragon" and was based on articles in BCM by a "notorious jailbird".