We are not amused V

Quite a lot not to be amused about in this post, including another example (as a postscript to We are not amused) of overprotective photo interdiction, this time at the British Library, with a snapping ban at their current exhibition on the early days of, fer Chrissakes, photography. The show is called "Points of View"(note 1). Well, you've just had mine.

And on the subject of overblown prohibitions, note en passant the predilection of the French authorities for keeping you off their pelouses. Back in October, I was conducting some field work in Paris (well, someone's got to do it..) on the blog's behalf into Germaine Richier's Grand Echequier in the Tuilerie Gardens, hoping to get a close up, when I was confronted by a Grand Non! Consequently her gargoyle chess set looks a bit remote, but you can just make it out: 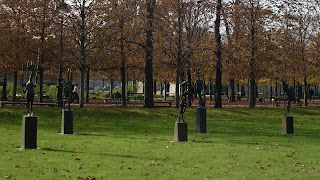 Back to the British Library, where "Points of View: Capturing the C19th in Photographs" displays (until March 2010) "maybe the earliest chess photo ever taken" - an appellation discussed in Edward Winter's Chess Notes last year (note 2). It's a shame you can't snap this historically and chessically significant pic. for yourself, so, as if to emphasise the oddness of it all, you have to make do with a reproduction of a print of the image of maybe-the earliest-chess-photograph ever taken, on the BL's own definitive website, and it's reproduced below: 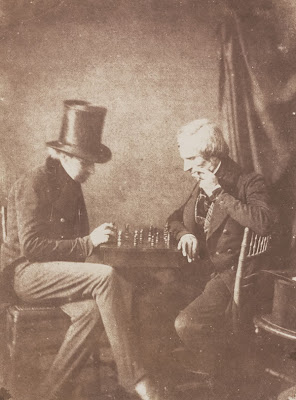 Put that date in perspective: Howard Staunton was then just approaching his prime, and Paul Morphy wasn't yet ten years old. But Claudet's study wasn't of Mr. Staunton, it was, according to the British Library, of himself. He's on the right. It is difficult to say who is his opponent under the topper, but it must have been one of the other pioneering photographers in the circle around Claudet's collaborator, the better known William Henry Fox Talbot.

Edward Winter's Chess Notes credits Michael Clapham of Ipswich for providing a source for a comment that the picture "brilliantly captured the tension that prevails during a chess game". Well, maybe and maybe not, as we'll see in a moment. The source also says that the pic. was Fox Talbot's handiwork (though dated to 1840).

Mr. Winter also reproduces another picture, which comes via the late Ken Whyld, which was "ostensibly taken on the same occasion": 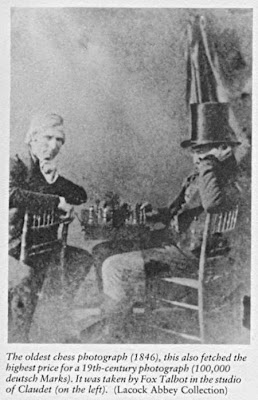 Yes, the same occasion surely (in spite of the date given in the legend of 1846), with again Fox T's claim, or attribution, of authorship, which by the way is also given in Chess magazine in November 2009, in an article by Gareth Williams (note 3). But if we stick to the British Library's guns (and, don't forget, they have the original), and go with Claudet as having the legitimate claim, then we can say that he not only took maybe-the-first-ever-chess-pic, but was also maybe-the-first-ever-victim of an airbrush conspiracy - quite an achievement.

But double-take now on the second picture, and consider another reason not to be cheerful: the two protagonists are obviously playing to the camera, rather than chess with each other: Claudet insouciantly reverses his chair, and his companion adopts, to my mind, a very unchessic posture whilst fiddling with his pieces.

Doesn't this give the game away? If the two pictures are from the same sitting, then it appears unlikely they were playing high-tension chess at all, in either picture, including the first one, in what is after all a photographic studio. It was all a pose.

And why did they bother? My first guess is they created the the black and white chess set-up as a stiff test for their new-found photographic skills, using the black topper as a striking tonal contrast to the blond tresses of M. Claudet - just like a primitive T. V. test card:

All of this jiggery-pokery and context-trickery makes it especially ironic that the BL website has a comment (note 4) by John Berger, author of classic Ways of Seeing (note 5), that seems to take the exhibition picture at face value as a serious chess game. Claudet, and his collaborators, Fox T. included, might have been amused: they set up a (bogus) scene portraying the psychological dimension of the game, and then cash in its cultural resonance to show (and this is my second hypothesis as to motivation) that photography could compete with painting as a vehicle for serious, proper, art.

But there is more to all this even than that. The BL exhibition dates Claudet's "maybe the first" chess picture to c1844-5. But, remarkably, on display is an even earlier one, dated July 1842 (inscribed on the print), showing a certain "Sir David Brewster playing chess": that's two years further back! And it's by Fox Talbot!

Four quick points to make: first, there is no reproduction of the picture in the exhibition catalogue or BL website so you will have to get to the BL to see it, or make do with my sketch. 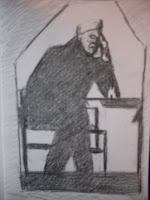 Second, as you can see, it shows only Sir D., with no opponent, so the Claudet two-player pic. trumps it on that measure. Third, fascinatingly, Brewster was a Scottish enlightenment tail-ender; a rationalist and polymath who (a) invented the kaleidoscope, (b) discovered a law of light reflection now named after him, (c) demonstrated how the the Turk chess-playing automaton could conceal a man and avoid discovery.

And the fourth point? In the BL pic. he poses in a dark dress coat and trousers with with the white pieces counterpointed against his sleeve, test-card style. So: a study in black and white contrast, a precedent for Claudet, and a successor perhaps to this amusing piece: 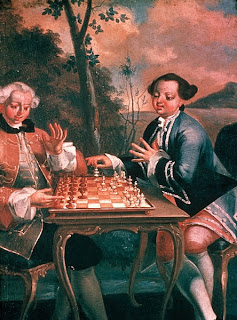 2. Edward Winter, Chess Note 5977, 29 January 2009. Where you will find references, and sources, for reproductions of these pictures, in considerable detail.

3. Gareth Williams, Collector's Corner. Chess, Vol. 74, no. 3. His source for the picture is Chrisitina Hole, "English Sports and Pastimes", Batsford 1949, which also apparently gives 1840 for the second picture. Mr Williams says "that Fox Talbot (sic) probably chose chess players as sitters, due to their ability to hold pose for the long period of exposure time necessary..". The British Library exhibition caption to the first picture also goes with the chess players "remain...immobile" assertion. Well, (a) Claudet was a photographer not a "chess player", other than a casual one, (b) chess players fidget when playing and aren't especially endowed with a talent for immobility - ask any life-class model. So (c) they used chess for other reasons.

4. 'A game of chess, like a game of cards, begins anew, offering pristine open choices. Thus, such games differ from life, where the continuity of cause and effect is endless, and no-one can ever return to start again at a beginning. This partly explains the deep and universal appeal of these games. The camera, conceived to interrupt endless lived time at "a decisive moment", is unequipped to enter the discrete time of games. It can take pictures of the players but it can't enter the time-field of their game. Claudet's photograph shows a camera placed at a frontier beyond which the camera cannot go.'

I got this off Morgan, but there is, apparently, one chess player mentioned in Ways of Seeing (footnote 5).

Unless he means Walter Benjamin (on page 27) I can't see it.