The Worst Move On The Board VIII

Vladislav Tkachiev, according to his Wikipedia entry

admits (to) leading a racy — if not hedonistic — lifestyle and to finding it difficult to cope with lengthy tournaments at long time controls. His passion is therefore for blitz chess and this appears also to be his real strength.

It is, I suppose, rather easier to stay awake at the board during a blitz game. Easier too, to play really bad moves, even of the magnitude that Tkachiev's opponent, one Vasily Ivanchuk, managed to find in the following position, at the World Blitz Championships in Moscow last November. Position after White's thirty-eighth move: 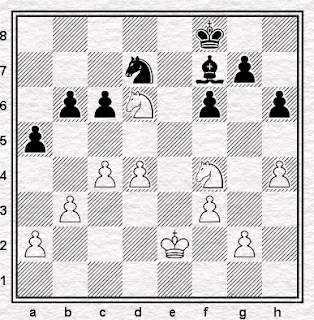 Easy to lose from here, but harder, much harder, to lose in the fastest way available. Ivanchuk managed, though, with 38...Bg8. The Worst Move On The Board. Happier days, then, for Vladislav, who I recall coming under severe personal attack from Nigel Short after the incident in Kolkata. Well, I bet he prefers Vasily to Nigel. But then again, who does not?

I found the position in an issue of Chess Today - and by coincidence, a few days later, the same publication had a position with a similar theme. No blitz game, this, nor a game recently played: Jackelen-Welling, Oberliga NRW Germany, 1997. Position after Black's fifty-ninth: 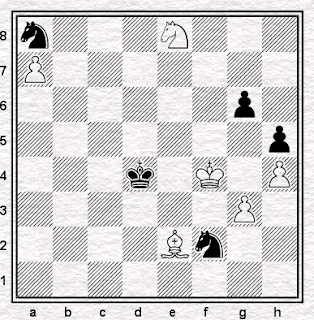 There's only one way to do it, but White found it. 60.Bf3. A bishop cutting off its own king's escape from a knight check, thus permitting mate in one.

Anyone can do it. It doesn't have to be a blitz game. You don't have to be Vasily Ivanchuk. Truly, chess is a sea in which an elephant can bathe, and a grandmaster can drink.


[Footnote: the S&B midseason rapidplay, reported on Wednesday, ended with a leaderboard as follows:

Happier days, then, for Vladislav, who I recall coming under severe personal attack from Nigel Short after the incident in Kolkata.

Not long after, Nigel was elected to be the ECF's FIDE Delegate.

I actually agreed with Nosher to some degree - I meant to write a post about this but never really sorted out what I wanted to say - but not with his characteristically aggressive and unsympathetic approach.

I also agreed to some degree with his becoming FIDE Delegate, on the grounds that he wasn't Gerry Walsh, whose time seems to me to have been up. But I'd have preferred a different candidate.

How about ...
"Truly, chess is a sea in which an elephant can bathe, and a grandmaster can sink." ?