How typical of doctors to find the one part of Randolph's body which is not malignant and to cut it out.

It's been some time since I read the Evening Standard, and rather longer since I paid to read it, my acquaintance with it gradually withering to the point where the only time I would ever read it was when I found a discarded copy on a train.

Even then, the only reason for reading it was Leonard Barden's daily chess column, which I would hope to find quickly, before coming across Allison Pearson or anything else that would be bad for my blood pressure. In future, it appears I need not take the risk: for Barden's column has been discontinued, in the print version of the newspaper at least. This is - or was - the oldest daily-running chess column in the world.

There are any number of reasons why this is bad news, but one of them can be seen by viewing the image below (click to enlarge, if you can bear it) in which the solutions to the puzzles are actually displayed above, and alongside, the diagrams to which they apply. Amazing. I expect the Standard will now start running film previews which give away the ending. Or crossword puzzles with the grid already completed. 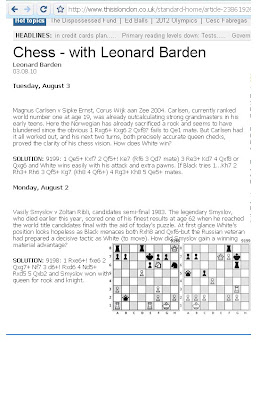 The fact that this actually occurred during the British Chess Championships is a testament to how not only the Standard but the British media as a whole cover chess: to wit, they don't. Losing - so casually - the longest-running chess column we have can only make that situation worse.

However, it's not impossible that the column might be saved. The same thing happened last year, and the column was restored after a lot of people contacted the newspaper to complain. A campaign is being mounted and people are requested to contact the editor of the Standard, Mr Geordie Grieg, and ask him to reinstate the column.

You can email via

or you may prefer to write a letter, in which case the address is

but whatever you do, please do something. Please be polite (and you may wish to avoid the kind of pejorative description of the newspaper with which I began this piece). But you may also wish to remind the Standard of the role that their newspaper played, back in the Seventies, in making English chess world-class - for instance, in sponsoring the Evening Standard congresses in Islington, in which so many talented players took part.

I also picked up a discarded copy of the Standard on a tube train recently, and found the chess column contained a win from S&BCC's very own Robin Haldane.

It's been replaced by a Battleships column. I should confess, I have a certain amount of affection for Battleships.

I remember the way Nabokov wrote about Battleships.

Never use irony on the internet...

Actually, as I recall, Bill and Ted's Excellent Adventure has the boys playing Battleships against Death in a a parody of Bergman.

London is a great and diverse city, and it needs to preserve its cultural heritage and traditions not abandon them. To my mind Mr Barden's column is among these. Chess may be a minority pursuit, but London is a city of many, many minority pursuits. This is what makes it great. But the point is that they are open and advertised to one another. A print column does this: an online column is clicked on only by those who are already interested.

When I was a schoolboy, born in London and living a short train ride to its north, I played in many chess congresses sponsored by the Evening Standard. I bought books by Leonard Barden, which called themselves Evening Standard chess books. Now the Standard's interest is reduced to an online corner where the puzzles are jumbled up with their solutions as if they had been thrown there. As I say, it deserves better than this. Please restore it to the print edition.

... of course, since the last time you paid for it, they've stopped charging for it. Wonder if that affects their views on the presentation of chess - ironic though that now their owner is Russian!

Is the battleships column entitled 'Sink The Barden'?

Not that this is remotely relevant, but if I recall correctly the Seventh Seal "homage" was in the 2nd Bill & Ted movie, whose name escapes me right now.

Yes, that would be right. Bogus Journey.

I noticed today that The Lady has a bridge column. Did it ever have a chess column?

I have received a reply...