The "Shipwrecked Surrealists" who found themselves together in the States as a result of the Second World War have appeared several times in these Chess in Art blogs, starting here, because they enjoyed a nice game of chess, especially between friends, Marcel Duchamp included.

Last year, in Chess in Art Postscript: The Significance of Seeing Ernst we noted that the sole survivor of the group, Dorothea Tanning, was then 99. Here she is a few years before, when a sprightly 80 year-old. She is about to spot the deliberate mistake and set the board up right. 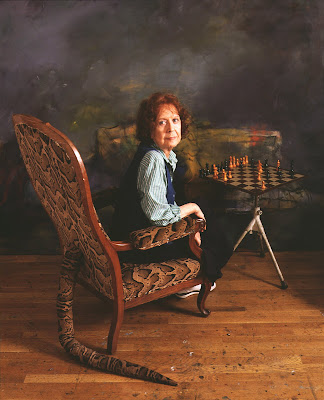 Dorothea Tanning in 1990.
"Primitive Seating in front of chess set".
Photo by Wolfgang Wesener.
When she was "only" 91, she was referred to, a little ungallantly perhaps, as the "the oldest living surrealist". Ms. Tanning has continued to wear the accolade with pride: she turned 100 on the 25th August just gone. So: Congratulations, and Many Happy Returns.

This post, on our chess blog, makes a modest contribution to the celebration of this long-lived and prolific artist, designer, illustrator, poet, writer and sociable chess lover. We start with the relationship that centred her life for over 30 years, with Dada-cum-Surrealist Max Ernst. 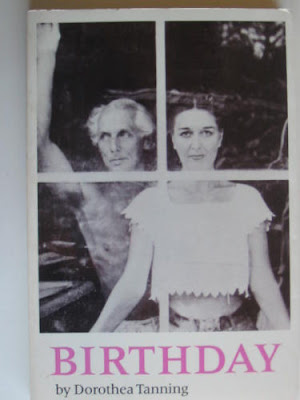 In 1942 Ernst, already established and in his 50s, was scouting for talent for an exhibition of women artists and, as she recounts in her biography happily titled "Birthday"(1986), he noticed a chess photograph in her studio. "Ah, you play chess...let's have a game" and they played "frantic chess" for days. He moved in; four years later they married; they were together for 30 more years until he died in 1976. She wrote, about that first chessic encounter, "There is something voluptuous, close to the bone about chess". Surreal paradox. Erotic allusion. Fleshy trope. Sadly, we don't talk about the game like that down at the club.

On the cusp of 1944/5 gallerist Julien Levy organised six of his friends and associates to challenge George Koltanowski to a blindfold simul. It was part of Levy's "The Images of Chess" exhibition which married his two obsessions: chess and Surrealism. Chess sets, boards and tables were designed, art works created, and music composed (see Chess in Art Postscript: Exhibitionism). Dorothea notes en passant, that Julien Levy "was deadly serious about chess, and as we didn't play with a clock, a single brain-cudgeling parti with him could last for days".

Perhaps Kolty, playing blindfold, was happy the sets were out of sight: a jamboree of Totemic Ernsts, a Modernist Bauhaus and, to make up the numbers, some Classic Stauntons. Marcel Duchamp played out Kolty's moves (they'd met before, when Marcel beat him, in 15 moves, in the Paris International tournament of 1929), and K. triumphed emphatically: Maestro 6.5 v 0.5 Équipe Surréaliste.
Dorothea collaged a composite picture of the occasion. She sits one along from Ernst on the right. He plays a set of his own design, she has a more conventional model (full line up in Note 1). 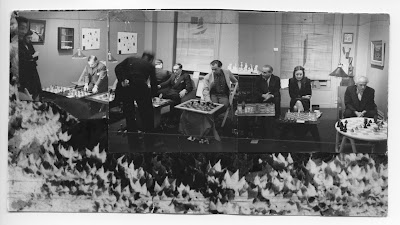 Dorothea Tanning.
Chess Tournament at the Julien Levy Gallery. 6th January 1945.
Collage with three photographs by Julien Levy.
Collection of the artist.
When war broke out, Ernst, German by birth, had been living in France with Leonora Carrington (another Surrealist, born in England in 1917, and also happily still with us, but in Mexico). He was anti-Nazi; they had deemed his art "degenerate". Occupied France was too dangerous, and aided in Lisbon by his new lover Peggy Guggenheim (known best for her art collecting; and her affairs) they escaped to New York, and married in late 1941. But it was to be short-lived after he crossed Dorothea's threshold the following year (it's OK, Peggy found solace in Samuel Beckett - also a chess player - among others).

This sets the scene for her artistic contribution to Levy's show, "Endgame". 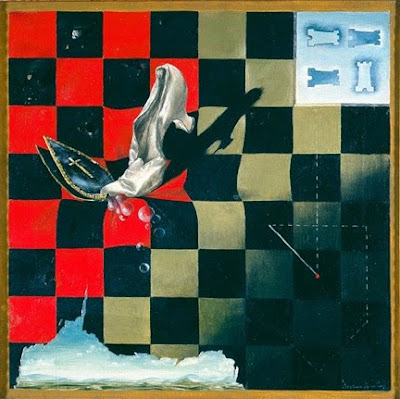 Dorothea Tanning.
Endgame. 1944.
Private Collection.
Larry List and Yves Marek (see acknowledgements) have interpreted the chess clues in the picture roughly as follows: the White Queen, in shoe disguise, manoeuvres around the King's side before emerging out of the darkness to climb the g1-a7 diagonal. She zaps the bishop's mitre, and deforms the board on c5, in the blood-red zone. It represents, they say, the artist's frustration with conventional attitudes to her live-in life with older, thrice married Ernst, who would finally manage to divorce Guggenheim in 1946. The fall-out from trouncing this narrow-mindedness would be the space of peace, harmony and light on the first rank, queen's side.

I'd like to add my two-penceworth: the show-down of the Queen/shoe and Bishop wittily takes place on the Queen's Bishop's file. Also, for my money, the shoe has a Knight's profile (think sea-horse), for which the heel is the snout. So it could be a White Knight/Queen amalgam in which Max and Dorothea are fighting as one (1. Q&NxBc5 - their favourite move?). Moreover there is a bishop double meaning: in French the "Bishop" piece is called a fou, also "mad" or "crazy". Maybe that's just a happy coincidence; but we can be sure that the artist would have been aware of the pun. 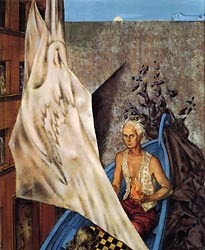 Max Ernst in a Blue Boat. 1947.
Mutual chess references abound in their work, as in the above portrait of Max, where they have a board aboard (my clunking word play; Ms. Tanning, I think I'm right in saying, has worked-in some rather more subtle references to his art). And there's Ernst's own The King Playing with His Queen, which was created in the same period (His Queen is of course she herself, borrowed from his designer chess set).

Ms. Tanning's autobiography was subsequently amplified into "Between Lives" (2001). It mentions chess a number of times in later years, including when she and Max "....played for two days non-stop with two Duchamps" - that's Marcel and Teeny - and also when, sometime in the 60s, the same four spectated at a Congress in Monte Carlo: "Equal time was spent watching the greats and playing our own boards".
There were Congresses in Monte in 1967, 68 and 69; won respectively by Fischer, Larsen and Portisch/Smyslov. It's not clear which one she is referring to, but it's a delicious thought that these grandmasters of the plastic arts would have been watching, and savouring, the art of the GMs of chess. One feels sure that Smyslov, with his musical gifts would have appreciated it, Portisch and Larsen, too; but rough-neck Bobby? (But see Note 2.)

Ernst died in 1976, and so Ms. Tanning has since spent as many years again without him. Happily she found another partner, Jimmy Merrill, a poet, though he too succumbed. She observes that she has outlived so many of her contemporaries. After Max, chess features less frequently in her biography, but the game yet provided a useful metaphor to embellish her telling (in English) of an eyebrow-raising episode in her home in France. It was occasioned by her housekeeper's lover, and would have made an interesting French exchange as he (no spring chicken) tried to solicit Dorothea's help in procuring a female play-mate for his lady so as to enjoy some hanky-panky (ooh la la!), voyeuristically à deux, or peut-être communally à trois:

""I thought there might, perhaps, be someone in your circle. Oh, I would be present of course." And as he murmured these words his gaze moved like a chesspiece to the square on the wall above us where hung my painting Family Portrait, a handsome (I thought) drift of nudes." (Note 3.)

Before we close this hommage it's worth noting that there are several works of Ms Tanning's in the UK, including this one owned by the Tate. 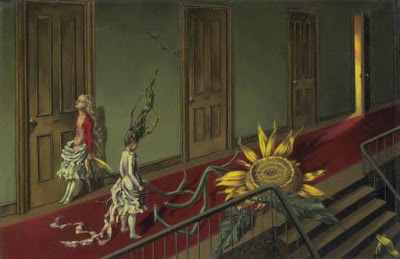 Eine Kleine Nachtmusik. 1943
Tate Gallery.
This haunted psychodrama is, admittedly, not played out on a chess board; though that paranoiac miasma, that contextual displacement: it's like you feel when you're losing. By the bye, the sunflower is rather like one in my neighbour's garden; the one that pretends it's not watching me.

Her later styles included soft, fetishistic sculptures, sometimes in complex mis en scène (for a taster, see the Wolfgang Wesener photo at the top), and paintings of imaginary flowers. But they, together with her poetry, would take us too far afield, except to note that a Guardian review of her first novel Chasm: a Weekend, published when she was 94 (!) says she "moves her characters like chess pieces....who will be sacrificed?...who will win?". Which is a more perspicacious compliment than the reviewer may have realised.
To sum it all up, if that's possible: what a wonderfully rich artistic achievement over such a long life: Happy One Hundredth Birthday, Dorothea, and may you play many more games of chess.

Notes1. For the full list of works see The Imagery of Chess Revisited. List (and Tanning, in Between Lives) gives the players as follows, from left to right: vacant Staunton set (presumably Julien Levy's - he is taking the photos); Frederick Kiesler (who got the draw); George Koltanowski (back turned); Alfred Barr Jr (playing Ernst's 1944 Wood Chess set on his Strategic Value Chess board); Marcel Duchamp (standing, back turned); Xanti Schawinski (on Hartwig's Bauhaus Prototype set); Vittorio Rieti (on another Ernst set and board version 2); Dorothea Tanning (Staunton set and board on top of Noguchi's chess table); Ernst (playing, of course, on one of his own sets).

2. A passage from Francis Naumann (2009) may, repeat may, shed some light, leaving aside his assessment of Teeny as "an exceptionally strong player". He mentions that in the late 60's the Duchamps once acted as tournament chaperone to Fischer. So, if Duchamp knew Fischer, might they not have gone out of their way to Monte Carlo to see him in '67? If so, did Dorothea meet Bobby? If so, did he like her pictures? So many "ifs". If she reads this, could she let us know!
3. Although the "handsome drift of nudes" is reproduced in Between Lives, sadly I've not been able to find a postable version.
Acknowledgements

Thanks to the Dorothea Tanning Collection and Archive for their help, and permision to use Endgame and the Chess Tournament pictures, and for the link to WoWe.
Thanks to Wolfgang Wesener for the use of the Dorothea at 80 photo.
Eine Kleine Nachtmusic is in Tate Modern. It is not on display at the time of writing, but two other of her works are: A Mi-Voix , and Some Roses and Their Phantoms.
Larry List (ed). The Imagery of Chess Revisited (2005). George Braziller, Publishers. New York. Yves Marek. Art èchecs et mat (2008). Imprimerie Nationale. Paris.
Francis Naumann. Marcel Duchamp - The Art of Chess (2009). Readymade Press. New York.
Dorothea Tanning. Birthday (1986). The Lapis Press. San Francisco.
Dorothea Tanning. Between Lives (2001). Northwestern University Press, Evanson, Illinois.