Let us then imagine the room where a top class tournament is being played. Let us go on to the stage and ask one of the players, say for example Polugaevsky, to give up his seat to us. Let us now ask Smyslov to tell straight away without any further consideration the course of his thoughts as he studies a position in which he, White, is to move.

I can be certain that his first reaction would be to count up how many pawns there are. 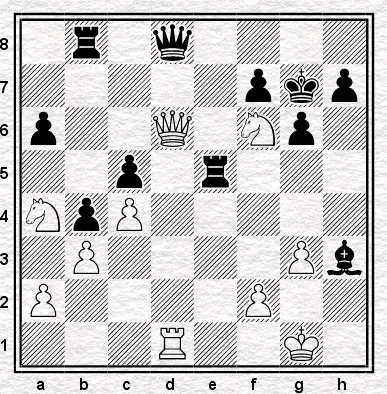 White has a choice of captures. He can take the rook on e5 allowing 27...Qxd1+ after which Black is an exchange up but White has a lot of threats, or he can take the queen with 27.Qxd8 after which play continues 27...Rxd8 28.Rxd8 Kxf6 and white has won back his exchange.

I thought I'd analysed the position well enough - and in all important senses except one, I had. Initially I'd intended to take on e5 because after 27...Qxd1+ 28.Kh2 I could force a draw. Black, with his rook hanging and his king facing a discovered check, is manifestly in a perilous position and in fact, after 28...Qf3 (which, Black told me later, he had planned to play) White wins with 29.Ng4+. 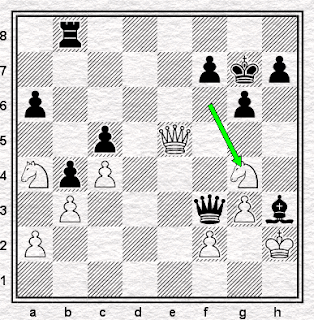 However, I think Raúl would have found the rather better 28...Qd4 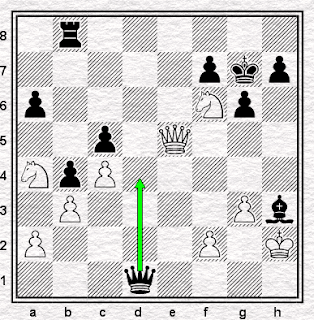 which I had seen in analysis and after which I could find nothing better than a draw. Correctly, because although there are two knight moves giving double check, or for that matter the queen can take the rook, none of these avoid the draw that follows after 29.Qxb8 Qxf2+ 30.Kxh3 Qf1+ or (for instance) 29.Ne8+ Kh6 30.Qxb8 Qxf2+ 31.Kxh3 Qf1+ when, despite White having two extra knights, Black has a perpetual check.

That's not so bad. In principle, I had nothing against a draw seeing as Raúl is a good player, rated some 170 points (and counting) higher than me. I'd be happy to take it. But in principle I'd also like to play for a win if I reasonably can, and here I thought I reasonably could.

Because White, surely, is winning a pawn here? Yes, he is, I realised, no doubt about it. And I can't take a draw if there's a pawn-up ending on offer.

So I changed my plan and instead of taking the rook, I took the queen and after 27.Qxd8 Rxd8 28.Rxd8 Kxf6 winning back the exchange I naturally continued 29.Rd6+ Kg7 30.Rxa6 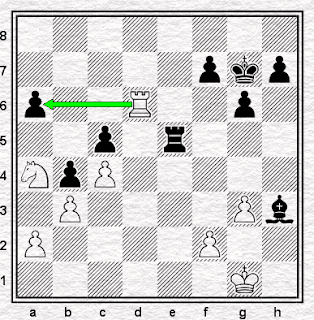 and having taken the aforementioned pawn I sat back to try and work out how I should go about winning this pawn-up ending.

At which point I noticed that it's not a pawn-up ending. It's an ending with the same number of pawns on either side.

How did that happen then? I gave it a little thought and shortly I realised that Black had actually taken a pawn, back on move 22 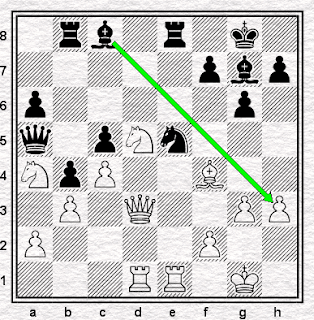 which capture I had, of course, noticed. Or at least I'd noticed it at the time. But after that I kind of forgot.

Even as it is, White should not have lost. He might even have won. But not being a pawn up after all doesn't help. Nor does discovering that you're not a pawn up when you thought you were.

I've got form for this, this losing-count-of-the-pieces business. There was this game from last year, where I similarly thought that I was a pawn up in an ending, but I was not: 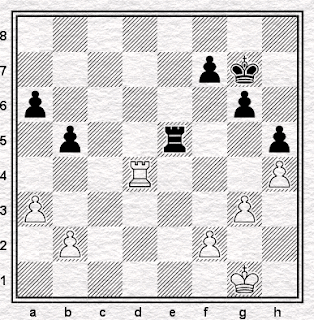 Black is not a pawn up
or this one from a number of years ago, where I offered a draw, not realising that I had an extra knight. 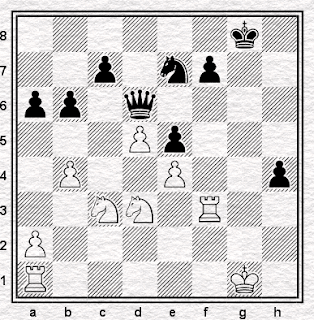 Two knights are more knights than one knight
At least Smyslov wouldn't have spotted that one.

Do grandmasters count up the pawns? I don't believe they do and I've never quite understood what Kotov meant by that, unless it be that they would do so on seeing a position for the first time, as opposed to one they had been looking at, watching develop, for several moves already. I certainly find it hard to believe that proper players habitually lose count of the material balance. Actually I find it hard to believe that I do.

Not just you ejh. When graded in the 190s I had a game 1 d4 d5 2 c4 e6 3 Nc3 c5 4 exd5 exd4. I didn't know the theory so I tried an alternative way to accept the gambit - 5 dxe6 Bxe6 6 Ne4 thinking 'well he's got some compensation for the pawn.' 20 or so moves later, I thought I'd neutralised his edge and could now exploit my extra pawn - at which point I noticed it had mysteriously vanished!

It's OK, I think we'd guessed!

Regarding Kotov's opening paragraph, I can be certain that his first reaction would be "What the $%*! are you doing on the stage!"