When we were Kings XI Last Thursday, the news broke [Chess Vibes, Chessbase, ChessDom] that Boris Spassky had been taken seriously ill while at home in Moscow. Even though the former World Champion is 73 now, the reports came as an unpleasant surprise to me. Somehow I seem to expect that the legends of the game will live for ever. I know, it’s completely irrational, but still it was rather a shock to hear that Doctors were "fighting" for Boris Vasilievich's life.

We’re forty years on from Rejkjavik, but Spassky, it’s said, is still the second most famous chess player in the world. It’s a sad irony, perhaps, that his illness should come hard on the heels of Bent Larsen’s death. The Dane’s best-known game is probably the one he lost to Boris in 17 moves at the USSR v The World match at Belgrade in 1970 while in turn Spassky himself is renowned for being turned over by Bobby Fischer in 1972.

Initially I’d thought it rather a shame that the career of a former World Champion should be reduced to a single failure - and likewise for Larsen - but maybe the true measure of success is the standing of those who surpass us. After all, the 1970s – our Golden Age - may have found Spassky already past his best, but, nevertheless, in World Championship cycle matches he only lost to those of the very highest echelon: Fischer, Karpov in the Candidates’ Semi-Final of 1974 and Viktor Korchnoi in the Candidates’ Final of 1977/78. That’s not such a bad record by any standard, but especially so for a man who was supposed to have lost his appetite for battle after he snatched the crown from Petrosian at the end of the 1960s.

Spassky became Champion just before we were kings

That epic battle with Korchnoi marked the end of Spassky’s great Candidates’ matches. He went on to tie a quarter-final match with Portisch +1 =12 -1 in 1980 (Portisch went through on tie-break) and play in the Montpellier Candidates’ Tournament of 1985 (finishing in the middle of the pack with +4 =8 -3), but Belgrade 1977/78 was his final genuine tilt at the World Championship.

Viktor the Terrible may have won out in the end, but it takes two to generate a quality scrap and Spassky’s contribution to their heroic struggle should not be discounted just because he finished in second place. Aside from all the tomfoolery that surrounded the games themselves [the swimming goggles, the off-stage rest areas, the voodoo, the walk-outs] Boris played his part on-the-board too. There aren’t many who could bounce back from a start of no wins and four defeats (not to mention having the worst of most of the five draws) in the first nine games of a twenty game match. Boris did, though, and from game 11 to game 14 he won an astonishing four on the bounce to all but get the match back on an even keel.

We’ve had Spassky’s wins in games 13 and 14 in previous editions of WwwK [II and X respectively]. As a result of these victories he’d clawed his way back to +4 =5 -5, but when he reached the position of the following diagram during game 11 he was 4-0 down and also facing an adjourned position in the unfinished game 10 that was clearly worse for him (and which he would eventually go on to lose). 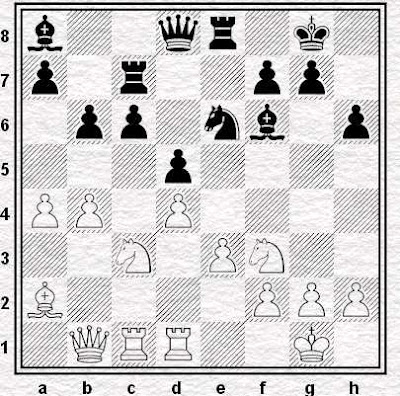 So Spassky’s match position looked beyond any hope of salvation and, what’s more, he was playing Black in a line (8. Rc1; 11. b4) that Korchnoi had especially prepared for the match. Indeed this system had already brought the newly ex-Soviet Grandmaster a crushing victory in game 7.

On his 19th move, then, Spassky’s back was firmly against the wall. Korchnoi had, according to R.D. Keene (in his book Korchnoi vs Spassky: Chess Crisis), played well up until now and gained an initiative on the queenside as well as in the centre of the board. Accurate defence was called for and yet, again according to my occasional fellow blogger, solid moves would simply leave White a free hand to strengthen his position at will. 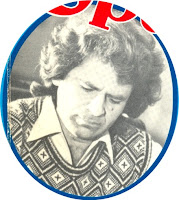 The situation could hardly have been any more desperate for Spassky and yet it was precisely here that his fight back began. He tried 19. … a5 which Raymondo gave a “!?” and described thus,

“An anti-positional move which encourages White to press forward on the queen side where he already holds the advantage. This decision by the ex-World Champion was probably of a psychological nature since it clearly came as a surprise to Korchnoi.” 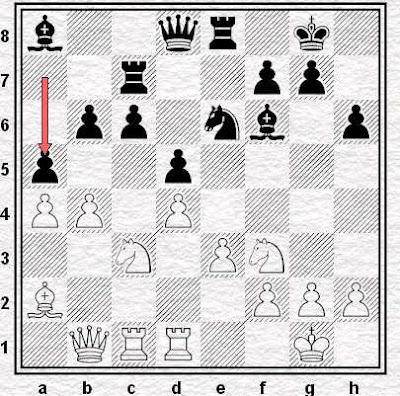 ... a7-a5 is hardly unknown in these kind of Queen's Gambit Declined positions, and indeed Spassky had tried the idea in a similar-looking (to me at least) situation in the aforementioned game 7, but, anyhoo, Spassky's choice clearly discombobulated Korchnoi who proceeded to reel off what Keene considered to be a series of weak moves. RDK’s notes, citing press-room analysis from Ljuobjevic, Najdorf and Korchnoi’s other English second, Michael Stean, suggest that 20. b5 would have been the best response to Spassky’s bold counter-thrust. Instead Viktor chose 20. bxa5 and went on to lose a game that RDK described Spassky’s “best of the match”.

Boris Spassky: chess fighter. It's not the usual characterisation but sometimes that's exactly how it was. Indeed, such was the strength of his revival that even though he was still a point behind after his four consecutive wins BH Wood wondered, "... whether Korchnoy (sic) can possibly recover the morale which must have been grievously affected by this unprecedented reversal ...." (The Daily Telegraph, 4/1/78). Sadly for Boris, Wood turned out to be wrong, but it was still a great fightback nonetheless. 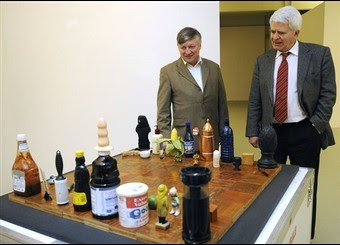 There doesn't seem to have been any news from Moscow since the initial reports emerged. Wherever he is just now, I hope Boris is on the mend.


With thanks to Angus, Martin and particularly Paul Timson.