I Khanty-Mansiysk Get Enough Of Your Love 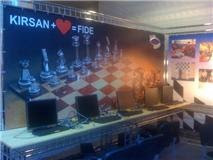 But what does it mean?
The photo is from the Ginger GM and the display board pictured is, apparently, in the lobby outside the playing-area in Khanty-Mansiysk.

In the comments box Maths enthusiast simona (or possibly this one) takes another approach, observing that by employing simple algebra, an outcome less pleasing to Kirsan's eye is easily arrived at:

Subtracting Love from both sides of (1):

Perhaps we may refine that equation, too, and express it thus:

FIDE - ♥ = KIRSAN
which means, essentially, that Kirsan is what you get when you take the love out of FIDE. Where 'love' represents the feeling that Gens Una Sumus actually means something and that chess is a world where all who play are taken into account.

Of course the expression could also work for other values, for instance:

KIRSAN + ₤ = FIDE
or, if we prefer, employing Simon's algebra

KIRSAN = FIDE - ₤
which would certainly be the view of some onlookers, and not just those who cannot tell their ♥ from their ₤.

Still, perhaps all this will change soon and with the help of the Times' chess correspondent chess will again "be seen as the human achievement it is rather than a global joke". Because with new, enlightened leadership for FIDE, Coca-Cola will reverse their policy of not sponsoring sports run by corrupt organisations. 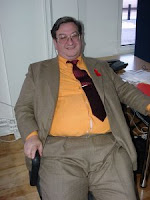 Not a joke
But what of Khanty-Mansiysk? It's not, perhaps, the centre of the Universe, though it may be the centre of Russia, which is not necessarily the same thing. Whether an out-of-the-way town of seventy thousand people is an appropriate place to hold an Olympiad is a matter which has attracted some commentary, not all of it to the liking of the present writer, especially those which refer to it as a Third World Olympiad, which is neither true, nor a phrase which I much like. It's an Olympiad, which is for everyone, not just the Western nations' club, and not a context in which dismissive references to the "Third World" seem to me to be appropriate.

It's not, I think, a great place to hold the Olympiad, something which would be true even if the process by which it comes to be there wasn't quite so murky. But is it really more dangerous than Moscow in 1994? Is the location more controversial than Haifa in 1976? Is the state which hosts it less democratic than Dubai in 1986 or more distasteful than Buenos Aires in 1978? (Or Leipzig, say, or Varna?)

It's a long way away, but then again, anywhere is a long way from most places. I doubt that anybody travelled much further than the South Africans. Who I don't suppose are complaining.


Nor are the world's great chess tournaments normally, if truth be told, always held in large towns - or places where you'd go on holiday for the weather - or for that matter, places are that close to major population centres.


Come to that, wasn't the greatest of all chess matches held in a pretty remote country near the Arctic Circle? 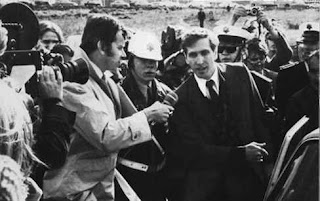 Which way to the beach?
It's going to be a bit unlucky for Tromsø - population, less than Khanty-Mansiysk, location, almost nine degrees closer to the North Pole - if we're going to apply the same criteria as are being applied to Khanty-Mansiysk. Because, it's one of two bidders for the 2014 Olympiad. The other being Varna, which is also near the sea. Except the sea near Varna is often warm. And not at all solid.

Now as it happens, I've been to Tromsø. I went there to celebrate, or perhaps avoid, my fortieth birthday. But the whole reason I went there was to get away from the world in general. (Which is, perhaps, not completely opposite to my reasons for playing chess.) Not because I thought it was a party city and the place to be seen in the summer of 2005.

Still - it's a remote part of the world and you won't get there without a long plane ride over snowy mountains. I wonder if those criteria will count against it, or if they only matter when you're outside Western Europe. The decision will be taken in Khanty-Mansiysk.

Anyway, you see my point. Either it is a world game or it is not. Either we embrace that idea or we do not. Easy for me to say, sat at home in front of the PC. But the travelling - of course it's an inconvenience. But isn't it sometimes worth it? And in some ways, is it not the point?

The algebra is based on a sports commentator that described snooker as "chess with balls".

Snooker without balls would presumably be a pretty boring game...

I can't remember where I read this or who wrote it, it might have been in Kingpin years ago.