1. e4!
I usually play 1. d4, but I took this decision because I knew that against 1. e4 my opponent always chooses the French Defence, which is also part of my repertoire.

If I recall correctly Botvinnik counselled against letting our opponents play our favourite defences against us. Still, with due respect to Mikhail Moiseyevich, I have to say I'm with Moskalenko on this one.

I rarely play kings' pawn openings these days so I don't often get the White side of a French Defence any more, but if I know my opponent will answer 1. ... e6 I'll very likely switchback to 1. e4 just for that game. It doesn't always work out - in JB v Peter Lalic, Surrey League 2009 I managed to both mix up my move order and blunder a piece within minutes of the start - but usually I get the sense that I have more of a clue as to what's going on than is typically the case when I try to play chess.

For example, I had this game a couple of years ago:- 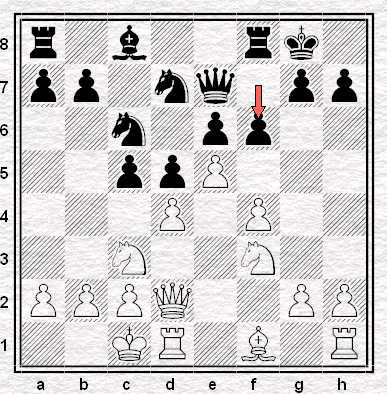 White to play
JB v AN Other
Slater-Kennington 2008

I'd reached similar positions previously, but never this exact one. Black's 10. ... f6 had surprised me a little and at first, try as I might, I couldn't find a way to prevent my centre collapsing after something like 11. ... fxe5, 12. fxe5 cxd4, 13. Nxd4 Ndxe5. Eventually I remembered an idea from a line in the Winawer I used to play as Black where White plays exf6 at a certain point then follows up by supporting his f-pawn with his g-pawn.

After 11. exf6 Qxf6, 12. g3 I'd expected mass exchanges on d4 and a decent endgame for me, but instead my opponent pushed his pawn to c4. I had considered this response but had dismissed without too much thought because it seemed to me that pushing the c-pawn, as is usually the case with this kind of French structure, releases all the pressure from White's centre and Black's queenside play will take far too long to organise to be genuinely threatening. As it happens, that turned out to be a pretty accurate assessment and I won the game by hammering away down the e-file and the h3-e6 diagonal. 1-0 to JB, then, the point courtesy of a familiarity with such positions gained by defending the French rather than attacking it.

Not your author's finest hour


Perhaps, though, there are some amongst our esteemed and valued readership who are currently thinking, "This is all very well but it's got jigger all to do with the French Exchange." Well, as Jules might say, allow me to retort ...

Last week, the Ginger GM's newly released Killer French DVDs dropped into my letter box. I'll have more to say about them in due course, but, for now, suffice to say I did what any right-thinking person would do when provided with some new material on the French Defence: I immediately looked up what Williams has to say about the Exchange.

I soon discovered that Williams recommends answering 4. Bd3 with … c5; good news for those of us who’ve been thinking about playing IQP set-ups for some time now. Pasting in some analysis around Korchnoi’s famous battering of Tatai at Beersheva, 1978, [TIFE IV - a game mentioned by our regular visitor Mike G in the comments box to the original TIFE] he is convincing when he suggests that Black’s activity more than compensates for the pawn weakness. 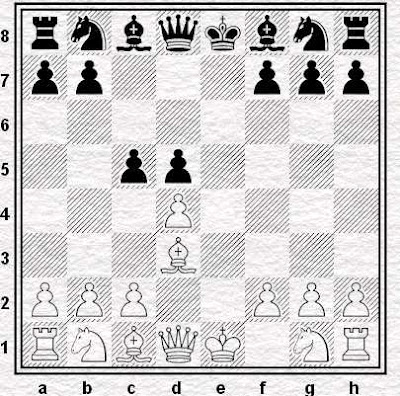 I was also pleased to see some time allocated to 4. c4. It’s a move that is sometimes rather neglected in opening books, particularly older monographs, but, in my experience, it’s one of White’s most popular choices at club level. Juniors, especially, seem fond of playing this way: when I was playing the French exclusively against 1. e4 I seemed to be having a munchkin playing 4. c4 against me every couple of months or so. 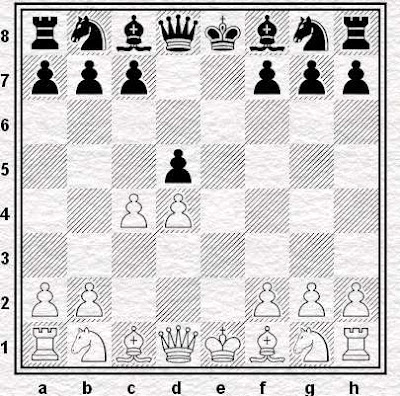 Anyhoo, have another look at the two diagrams for a moment. The bishop is a little misplaced in diagram one. What if White decides to use his extra move to improve his wayward piece, say by moving it to b5? This could be straightaway with check or perhaps later on to pin a knight on c6. The result, clearly, is diagram two with colours reversed if Black plays a quick ... Bb4+ there (as Williams suggests he should).

So Williams’ recommendation against 4. Bd3 could lead Black to play the French Exchange himself! Not so much "Now I do not care about the colour of my pieces" as "now I don't care about the side of this I take."

I suppose you could say that this is not the same thing at all. The French Exchange could be considered progress for Black (=+ to =) but a retrograde step for White (+= to =). Even so, you don't get positions that you can play with either colour and from either side of the board very often. To my eyes that's something interesting. Very interesting.

Indeed so my anonymous friend. In diagram 2 if Black takes on d4 then Bxc4 in response will be a direct transposition to the QGA. He won't of course - he'll wait for Be2 or Bd3 and gain a tempo. I guess that's why 4. c4 in the French Exchange isn't quite as popular as the QGA.

Since we're talking openings that it's close to, however, we could also say that if we shift black's pawn from e7 to c7 we have a Panov-Botvinnik Attack.

And lo it came to pass in my very first go at playing those ... c5 systems against the French Exchange.

I was heavily overdosing on The Wire when I chose my Chess Cube screen name.

I agree -- there is more to the French Exchange with c4 (often called the Monte Carlo Variation) than widely acknowledged.