If you tolerate this, your chessboard will be next

To mark this event they have issued the song with a video, which will be the subject of today's lecture, given that the subject of the video is chess. The video stars Anna Friel and Michael Sheen, about whom Nicky Wire enthused to the NME:

It looks like Michael Sheen is gonna be in the video, which we're really thrilled about...we've tried to recreate the classic Seventies chess match between Kasparov and Fischer. That's the kind of vibe behind it. It's real Seventies Russia.

Uh-huh. Well, as they say, where to start with that? That was in the NME on on 28 July, and the same day - I'll have a little guess that it was later the same day - the story was being presented slightly differently elsewhere.

The concept for the video will involve creating a chess fan's dream match between Kasparov and Bobby Fischer who never met or played each other in real life.

I do like that "never met or played each other in real life" - only the "we would like to make clear" is missing - though it doesn't say whether the site, or the band, were responsible for the clarification. One guesses it may have been the Manics' press people, conceivably after somebody put some awkward points to them about the "classic match" which Wire was hallucinating.

But wait: what's this?

Port Talbot-born star Michael Sheen is being lined up to portray Russian chess genius Boris Spassky in a new video for The (sic) Manic Street Preachers.

Confused? You will be
Was Wire changing his mind, or were people changing their minds about what he could possibly have meant? Never mind, by the time it came to record the video, all had become clear. Sort of. In the making-of-the-video-video, Michael Sheen tells us: "my character's sort of based on Kasparov".


He's still under the impression that Kasparov was a Seventies player, which is only true in the sense that David Bowie is associated with the Sixties, but that's not important: he'd done the research he needed to, and he does his Welsh Kasparov rather well, big shoulders, lots of presence. As Brian Clough once put it: he's a good lad, he works hard.

Not everybody's research seems to have been quite so thorough, judging by the Russian flag which mysteriously appears at 0.12 in the making-of video. Mercifully, they replaced it with the flag of the Soviet Union in the actual video, keen as they were to get the details right.

Keen as they were to get some of the details right. But not the chess. Of course.

In the song video (sorry, we haven't got an embedded version) the position on the demonstration board is very clear, very early on. 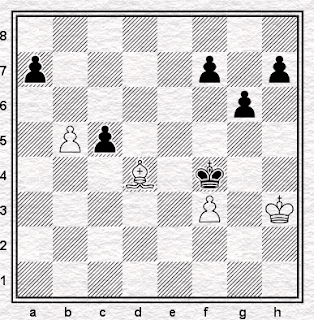 Whoever has the move is going to win this one, that's also clear - and as we look at the players, it's Sheen, with the black pieces, who is to move. He plays his move and Friel replies immediately, pressing her clock with the black pawn that she's just captured. (A nice touch, I thought, seeing as that's something we often do.)

But, if we can haul ourselves away from this rather unorthodox draw agreement for a moment, what's actually happened on the board? Wire - who, amusingly, comments in the making-of video that

we're surrounded by great actors, so we haven't got to do much

doesn't, perhaps, do quite enough.

He takes the black pawn on c5 with the white bishop on d4. 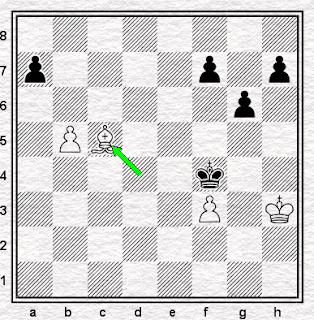 That's the pawn Friel captured: that's her move all right. But hang on - they both played a move. So what was Sheen's move then? Where is it? He played a move, Friel replied - but only the reply appeared on the demonstration board. Wire's seen two moves - but only shown us one. So where's Sheen's move? What did he do? Play an air shot?

You can, in fact, see quite easily what's happened, if you look at the board when Sheen, having stalked his way around the room, comes back to it and sits down. You don't really have to be a chessplayer to see it. What you have to do is notice that for several seconds, from about 0.55 onward, there are two white pawns together on the far side of the board, Friel's left, Sheen's right. (You can also see this, briefly, on the TV camera at the start of the video, just before Sheen pushes it around.)

Looking harder, we can make out what's actually happened. Although their hands are out of shot by the time the moves are exchanged, we can see beforehand that Sheen has a pawn on b6. So he captures a white pawn on c5, and Friel recaptures, which means that the position on the board must have been this: 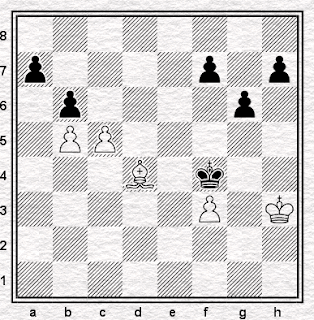 or, if you prefer, this. 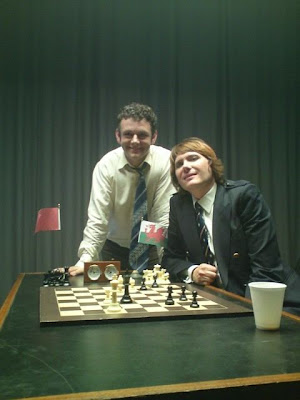 Or it's like showing an action replay before the event takes place. Or what you will. The point is, you can't do it. It's wrong. It's stupid. 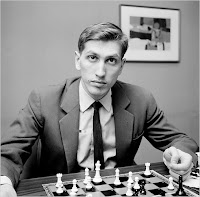 What's the difference between Bobby Fischer and Michael Sheen? Sheen has played Garry Kasparov
Obviously, I don't know exactly how this has come to pass. Whether it's simply an error or more a matter of design (ho ho) or whether they just didn't realise that you couldn't have a move on a demonstration board before somebody had actually played it - but why would you think that? Or whether they just decided it was simpler to stage and shoot if you did it that way, and it didn't matter, because nobody would notice. Or if they did notice, nobody would care. Or if they did care, then so what, because they don't matter anyway.

Perhaps it doesn't, in the sense that it wouldn't matter if I had referred to Martin Sheen throughout this piece, or called the Manics Scottish, or mixed up Orwell with WH Auden. One might, I suppose, do any of those things - though not, I hope, through not caring whether what was written was right or wrong. And if they were the central subject of the piece the error would look pretty foolish. But chess is the central subject of this video - isn't it?

[Wire photo: Last FM]
[Thanks to Sean]
[Manics' video originally spotted at Spraggett On Chess]
Posted by ejh at 9:05 am

Harry Brown: Another example of people going to an awful lot of trouble to get the chess of the 1970s wrong.

Note to Nicky Wire (1): If you wanted to research 70s chess you could always have gone here

Note to Nicky Wire (2): Get your bleedin hair cut.

In the 'making of' video Sheen looks quite like the Boris Spassky of 1972 don't you think?

The computer graphics look of the large demo board is anachronistic but in general I think the spartan look of the stage is quite a good representation of photos I've seen of soviet era (70s and 80s) chess matches. I also think Sheen's got his posture at the board - hunched over, fingers to the temples - spot on.

I wish to place it on record, with a view to the continuance of my marriage, that nothing like that has ever happened whilst I was playing under a Welsh flag.

Could this be the real solution to increasing chess's mainstream popularity?